Putting the Garden to Bed

In the summer of 1971 when I was 25, I made friends with two old farmers, brothers who had fled a broken Germany after “The War to End All Wars,” as some called World War I. They were old enough to be my grandfathers and spoke with heavy accents, but they were my heroes. I had wanted to be a farmer since my grade school days. Besides, they reminded me of my own grandfather whom I rarely saw.

Franz and Jakob had a small dairy in the hills outside Salem, Oregon. They also raised apples and once on an afternoon about this time of year, they showed me how to graft one type of apple onto another. The brothers worked as a team — one held the small cutting, the other made a delicate slice with the knife in the bark of the receiving tree and then applied the sticky tar and grafting tape.

For a long time my dream of farming was just that, a dream. I worked at a lot of different things for a lot of years — office manager, paralegal, grocery checker, administrative assistant, newspaper reporter/typesetter, editor, desktop publisher, writer, actor, and pastor. A lot of years have passed since I met the Hoefer brothers, but finally I am a farmer — at least an assistant farmer to my husband. We even have our own apple trees — a Gravenstein, a red delicious, a golden delicious, an Arkansas black, and one that we have never been able to identify. We are also blessed with a variety of other fruit trees and grapevines, as well as olives and a walnut tree and two almonds. 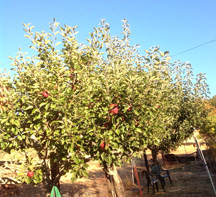 This was a good year for fruit. We have stored jars of apple butter and quarts of dried apples along with peaches, pears, figs as well as the late ripening Arkansas blacks, persimmons and pomegranates still to come. Grapes were especially abundant — we’ve picked baskets and baskets. We’ve sold some, but our grapes are old-fashioned types and are not seedless like the modern varieties. I don’t really notice the seeds, but they seem to bother most people.

All this fruit has been a boon for the street people we share a meal with every Sunday at a local Park & Ride lot. Anywhere from 15 to 30 men, women, and occasionally children come. Everyone is welcome whenever they arrive. 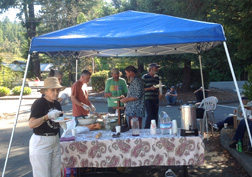 My husband makes sure everything gets loaded in the truck and helps serve, as do several others. I prepare food for the maximum and while there’s always enough, seldom do we have leftovers. Yesterday was the fifth Sunday of the month. That meant that even the homeless folks who get disability checks were broke and hungry. I spent the morning making refried beans for tostadas with cheese, lettuce, and our homemade salsa, plus a big sheet cake, and two large baskets of grapes I picked the night before.

I’ve been doing most of the cooking for the Sunday meal these last 6 or 7 months (after my volunteer cook moved on) and I’ve learned to “go with the flow.” I’ve discovered a thing or two to make things quicker – I mix up a double batch of cake batter and pour it into my largest rectangular pan. Instead of frosting it, just before I put it in the oven, I’ll sprinkle some kind of topping right on the batter. I’ve used cinnamon/sugar mixture for yellow cakes, but yesterday I found a large package of coconut hidden at the back of the refrigerator, so I covered the batter with coconut and then sprinkled brown sugar over that. It came out broiled and bubbling and smelled wonderful.

Coconut and brown sugar are favorites of mine, but by the time we were packing up to leave, when I found the cake pan, crumbs were all that remained. Just as I went to scoop them up for at least a tiny taste, Robby came up and said, “Are you going to throw the crumbs away? I sure would like ’em.”

Robby, a soft-voiced, slow talking man, is one of my favorites. He’s kind and helpful and always takes such good care of his “lady” who seems confused at times. Recently she was hospitalized for 27 days. I worry about Robby and Janie and all the others sleeping down by the river in the heavy winter rains. Yesterday and this morning, it drizzled, an omen of the days to come. The county’s winter shelter doesn’t open until November 15 and then closes March 1.

Sharing our produce with our homeless friends is one small way of giving back for the privilege of living on this beautiful place that provides so well for us. Now it’s time, as the Hoefer brothers would say, to “put the garden to bed,” at least the summer beds. But in the weeks to come, I hope that the cauliflower, chard, and kale do well so that we’ll have fresh vegetables available for everyone through the winter months. Hot soup, stews and casseroles can surely warm the heart as well as the body.