What to Do With a Lifetime of Greeting Cards

With the month of February came the need to sort out a room full of scrapbook supplies, photos, greeting cards, and everything else I’ve neglected the last few years since we’ve become gardeners/farmers. I’ve been working on it for days, weeks, even months by now. I sorted a little here and there, closing the door after each attempt in desperate hope that I would know what to do with more of it at a different time. “Maybe in the morning,” I would say to myself, “I’ll have some inspiration for another pile.” I found it overwhelming, and each time I entered that room I felt depressed and thought, “I hate my life.” Larry would often remind me to tackle it little by little and it would get done. Well, he was right, and I’m just about finished. But, I’m sorry to say that I have three large boxes of photos in which the sorting means just that – I put them all in three large boxes for a future time that may never occur.

I would like to tell you about one of the more pleasant parts of the task – the greeting cards. Piles of them! Fifty-five years worth! So I asked my Facebook friends for suggestions on what to do with them, and I received some interesting replies. Here they are:

_Toss them so your children won’t have to deal with them. I’m sure they would vote for this one!

_Toss most of them, saving only a few special ones. Obviously, that person hasn’t been around long enough to know just how many are special! Just wait until his children, yes HIS children, grow up and write sweet things in all his Father’s Day and birthday cards!

_Use them to make jewelry, gift boxes, Christmas ornaments, or other crafts. The web is full of ideas. I’m not exactly crafty, but that sounds like fun. The problem might be that crafts usually require bringing in even more stuff to take up space.

_Save parts to use on scrapbook pages, or intersperse the cards in a scrapbook with photographs of the person who sent them. I doubt that will work as one of the reasons for my mess was that my scrapbooking material was still where I left it laying years ago.

_Use parts to make personal greeting cards. I like this idea and saved some for that purpose. Now I suppose my family and friends will think that I’ve just gotten cheap!

_My friend, Janet, gave me my favorite hint. She said she had a friend who writes down the names of the people who give her cards for an event before she throws them away. This worked perfectly for a whole pile of cards we received when our children gave us a 40th anniversary party. It is now 15 years later, and Larry and I had a special time going through them and rereading all the memories people had written. We kept a handful of special ones, the endearing notes, and then I wrote down the names of all the people who sent the cards in the back pages of the guest book. What had taken up a lot of space is now thinned way down and neatly organized.

_Take photographs of favorite cards and keep them on a hard drive, or make a digital scrapbook. I should try this with the homemade cards and notes from the grandchildren. 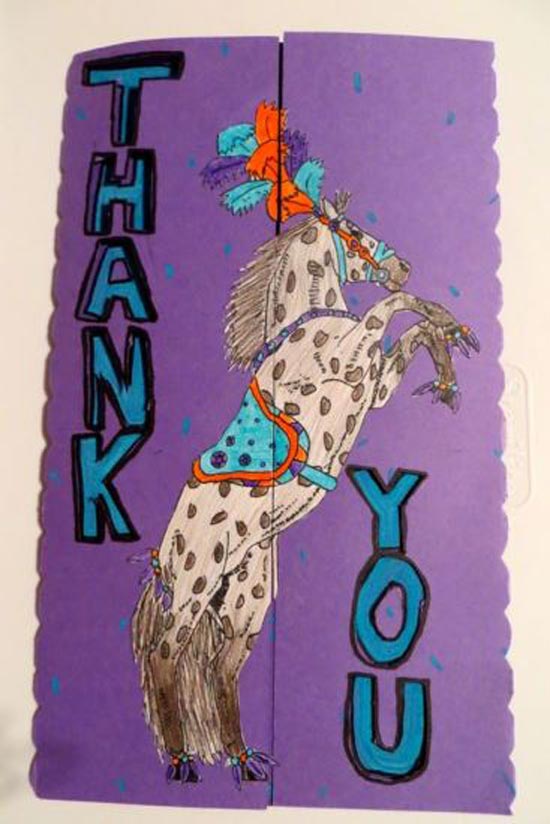 Our oldest granddaughter, Allison, made this card years ago to thank me for teaching her how to play the piano. The letters are cut out to reveal the same letters inside the card. I love the horse as it is a reminder of that phase of her life.

_Bundle and mail or give them back on a special day. We might do that. I think the grandchildren would like seeing cards they made for us when they were little. I also took the time to do something similar for friends. I chose one of the sweet cards they had given me, and wrote on it, telling them I had just reread the many cards they had sent me over the years, and thanked them for both the cards and their friendship.

One of our decisions was to toss cards where people only signed their names. That was easy to do with those sent by friends, but then we realized we had thrown away several from one of our children who often just signed “I love you” and their name. We both choose cards that already say what we mean, and thought maybe that is what we should be cuing in on with this child. So, we started saving some of those. 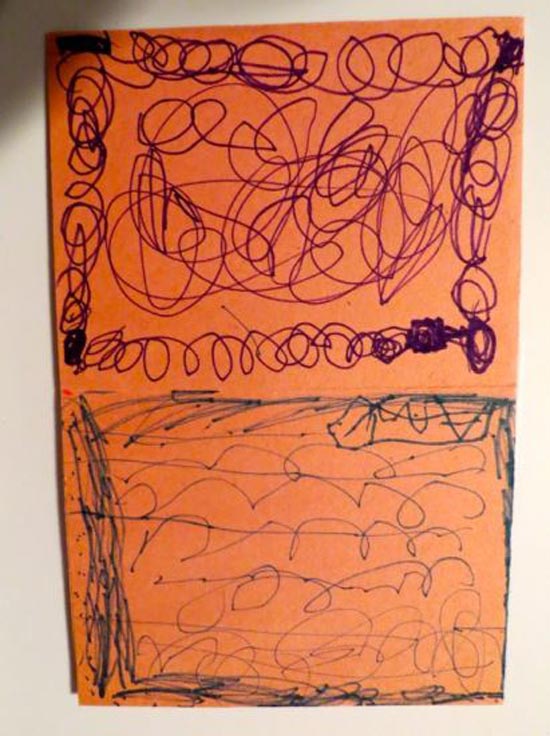 A handwritten message is very important!

I am feeling pretty good about our card sorting, discarding and organization. We now have three boxes of special cards: one with cards to Larry, one to me, and one to us. Then I have a box to toss more in as we receive them to be sorted later. All we have left to go through is a box of thank-you cards from our children and grandchildren that we don’t have time to read at the present, but they will brighten up some winter evening in the future.

Then, UGH! I can’t believe what just happened to me. I was in our walk-in attic today and found a box labeled “cards.” Noooooo! Plus, another whole page of OOOOO’s. Surely I had just forgotten to cross out the label, and it was filled with something else? Well, it was full of greeting cards. These cards, however, are different from those we’ve been sorting. They are old! Antiques! Back from when we were dating and first married! Back when we still called each other darling! Also, cards our little children bought or made for us. Cards from our parents. Precious cards. 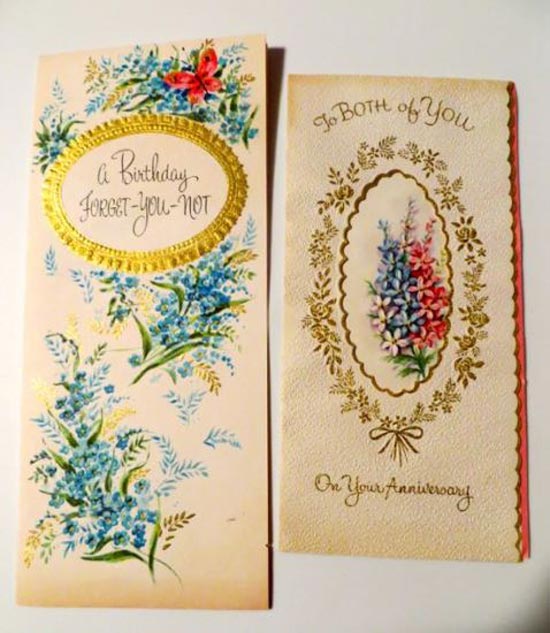 The antique greeting cards were much smaller and often tall and skinny. 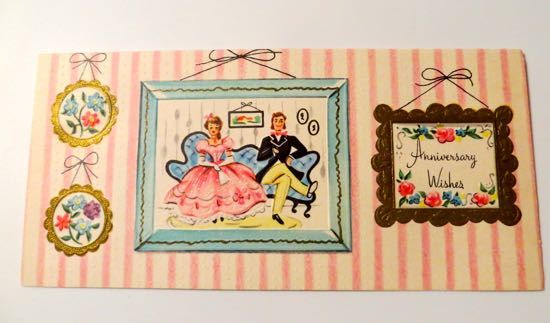 Or long and skinny! 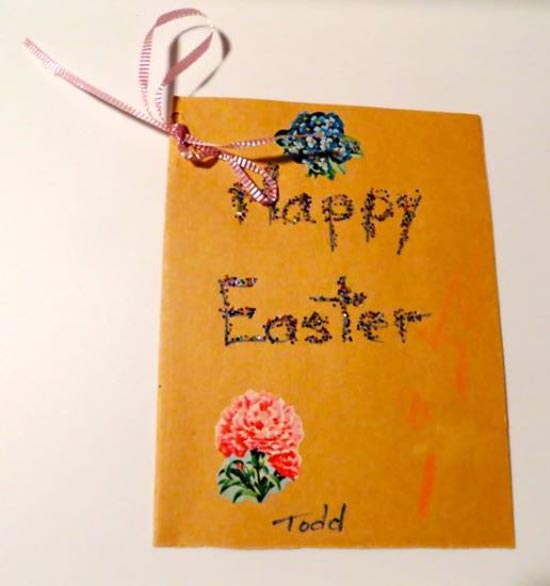 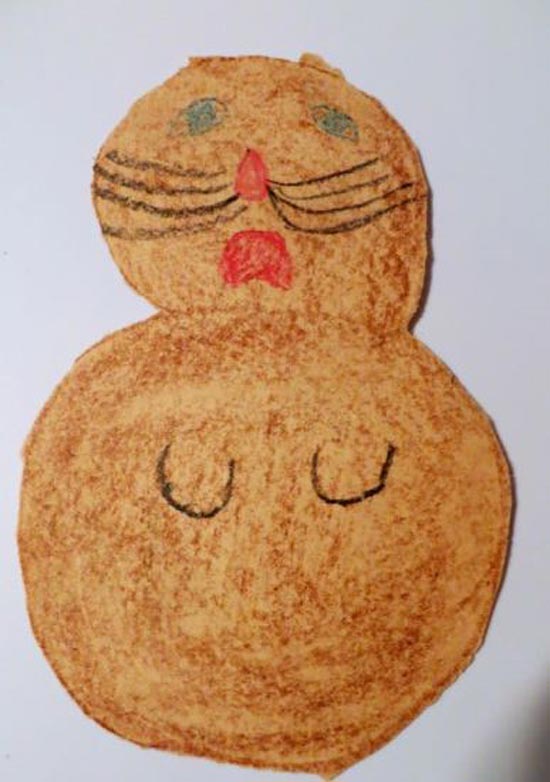 Made with little fingers. I think this bunny’s ears fell off over time! 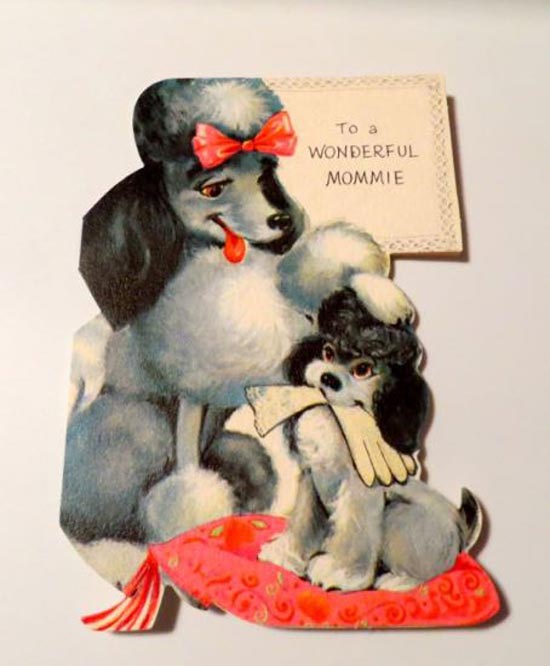 This says it all!

How could we possibly throw any of these away? We didn’t. Just think how much fun our children will have going through this box someday!