From Brooder House To Chicken House

On my last post, Old Buildings, I promised that if you “stay tuned,” I would begin our story about what we did with several of the old buildings, so here goes with the smallest one!

When our granddaughter, Erin, moved to our farm, she not only brought her horse and three newly acquired sheep, she had already placed an order for 30 baby chickens. She was going to have an egg business and was excited to get started. The chicks could get by with temporary housing as they grew, but would need a chicken house by winter. It was a good thing we had a late fall that year of 2010, because a chicken house would take time to build. Here is the story about the transformation of the brooder house to a chicken house. 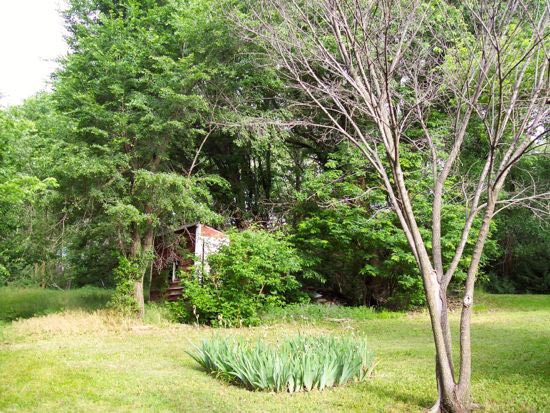 See that little building lost in the bushes? That is a brooder house. So many people have told me that they didn’t know what a brooder house was. Well, it is for baby chickens. One of my favorite childhood memories is when my mom and dad would come home smiling and happy with boxes of baby chickens. I couldn’t wait to help put them under the brooder stove. Then Mom would become like a new mother, always checking on the babies, even in the middle of the night, to see if the temperature and everything was just right.

If this brooder house could talk, it would tell you similar stories of the many springtimes it held baby chicks, and then how later in life it became a playhouse for little people. When we first saw it, the roof was falling in, covering play furniture with asphalt, dirt and leaves. Unfortunately, that was its last life, because when a roof is ruined, the building quickly decays. 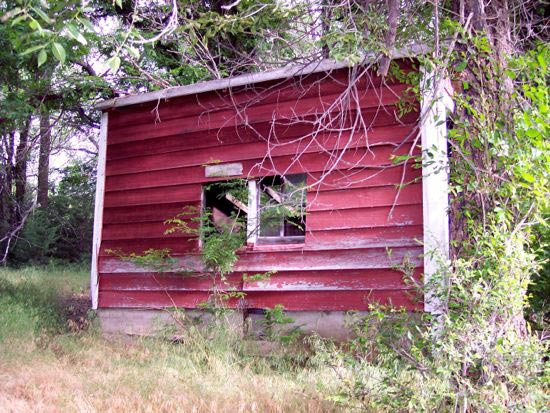 I remember when the realtor showed us the brooder house. Bushes had grown around the entrance, and we could barely get close to the window to peek in without getting scratched. It was a total mess, but the little door in the foundation was my clue to its original use. 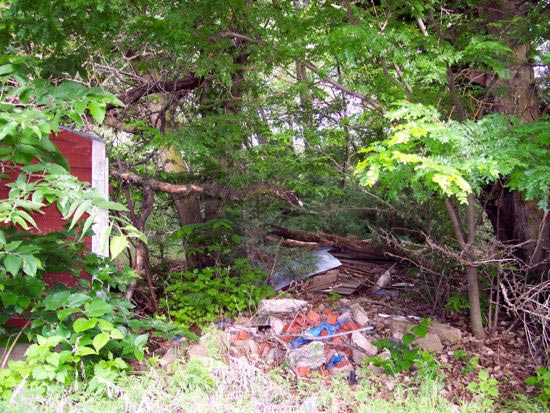 The opposite side of the brooder house had been used for a dumping ground. Just like every building project we would endeavor, before we could even get started, we first had to spend hours cleaning up who knows how many years of people’s junk. 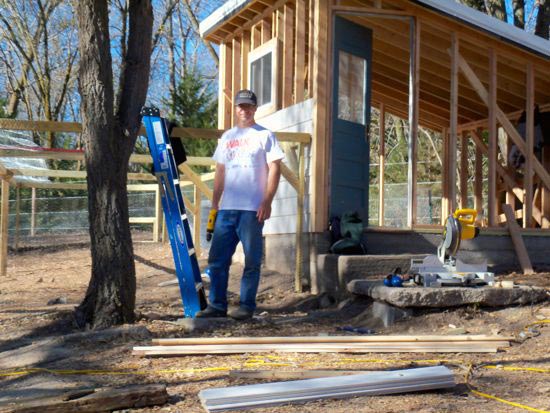 This would be the only building we rebuilt from scratch. Well, not quite from scratch. Todd reused the foundation, which saved the hassle of getting rid of the old and the cost of a new. I wish you could see the finished inside with its nesting boxes and roosts. 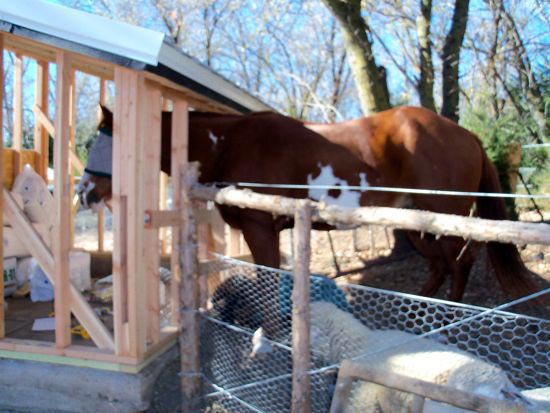 He had built a chicken house before and said two is enough. I don’t know why. He had lots of help as you can see in the photo above! 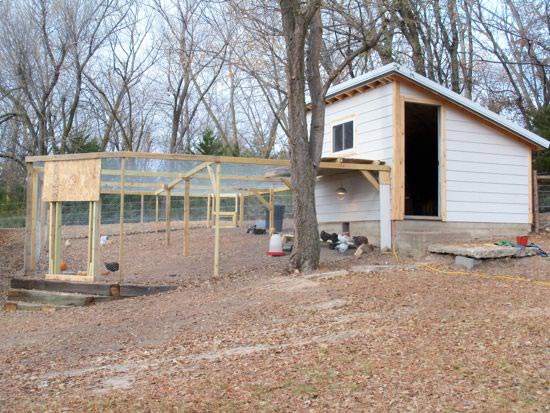 Nancy and Erin did the backbreaking job of weaving the wire together over the top of the pen. The chickens would usually free range, but this was a good safe place when needed. 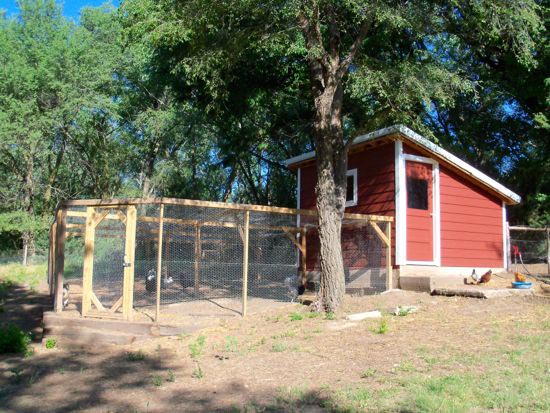 Todd built a little door in the back of the pen, and also the tall front door. The railroad ties he used for steps came with the property. Larry helped with the roof, I did most of the painting, and Ta-Da! There it is!

This summer, Larry and I hope to add some dirt and plantings for some finishing touches around the old front cement slab and step. We are so glad we took the before pictures, because we have become accustomed to this scene and had nearly forgotten how horrible it was originally. 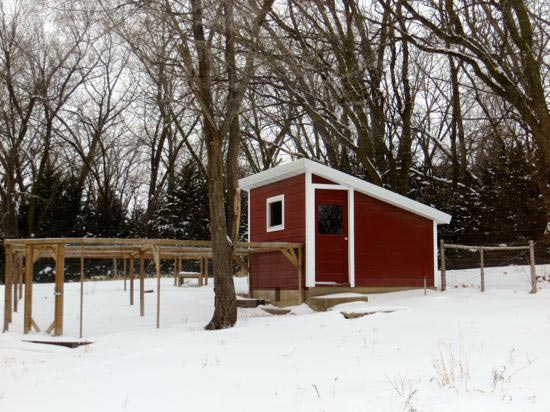 A beautiful winter scene: On the right, take notice that instead of the junk pile, there is a unique fence made with cedar posts we harvested from our own little forest! Read about it in A Gratifying Accomplishment. 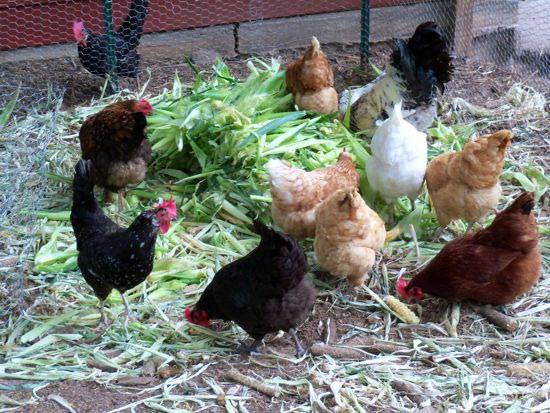 Erin had a good egg business, and we all enjoyed the antics of her choice of colorful and interesting chickens. Well, except for the mean rooster, Jack. Although, we have some colorful stories about him, too!

Speaking of stories, the kids moved off the farm after three years when Erin went to college, and it is rather sad that this old foundation now holds an empty chicken house. If buildings could indeed talk, I wonder what this one would say in another decade or two? Perhaps, “I’ve housed many a chicken in my time, but I remember way back when I was rebuilt, and that young teenage girl …”

This building continues to serve us, even after it was razed. 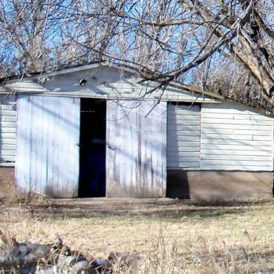 We read that one need not be hasty in destroying old farm buildings, especially if you can’t afford new ones, as they can often still be used. 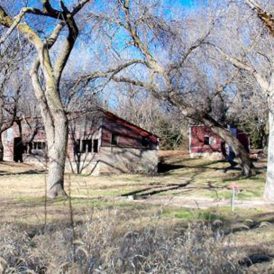