If you are reading my blog for the first time, you missed a series I did on saving our old buildings. It has occurred to me that I haven’t written about one aspect of neglect that we encountered and perhaps it could be a helpful reminder to someone. You see, when buildings are abandoned, shrubs and trees start growing up close to the foundation, and eventually push it in causing cracks and leaning. The men had to first cut away a lot of this growth before beginning repairs on all our buildings.

I want to tell you about a building we still haven’t tackled that has this problem. It is located right next to the barn and was one of my favorites when we first came; maybe because of all the unusual things we found in it. A neighbor told us that it was built by a gravel company and used to repair their machines as they worked nearby. Thus, we call it the pit. We would like to rebuild on the foundation, if possible, because a lot of it is below ground level and would be perfect for a root cellar and other uses. However, time for doing extra hard work is running out on us old folks, so our immediate goal is to get the roof off as the asphalt shingles are beginning to blow all around. 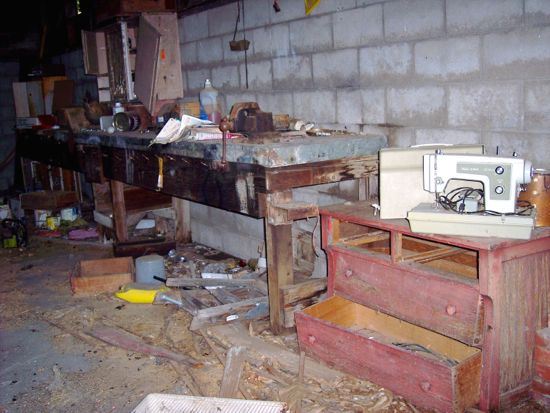 The cleanup: Here is a photo of the inside after a lot of junk had already been removed. Interesting to me were the shelves of magazines, a sewing machine, wood shavings on the floor, and children’s toys. In my imagination, someone later used this for their hobbies while children played at their feet. OK, they probably just dumped their junk there before leaving! Eventually, we completely cleaned it out and it is very roomy with easy access. The tool bench was built to last, and Larry sometimes uses the vise on it. Granddaughter Erin used it to store hay for her animals. 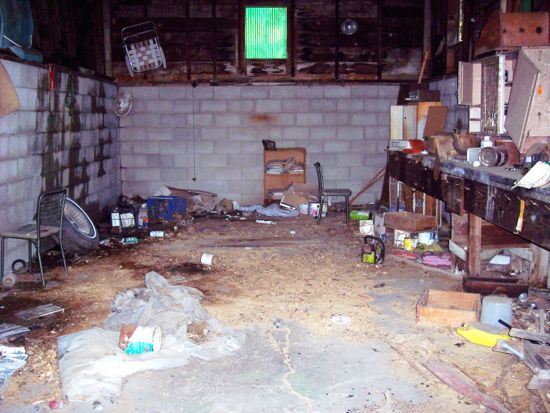 Maybe you can tell on this similar photo that the left wall is leaning in, so let’s meander outside and find the cause. 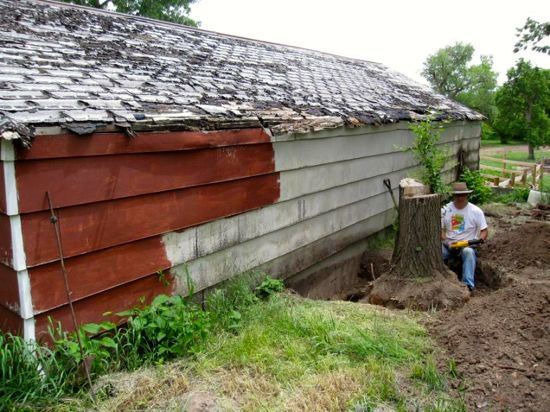 The men had cut down this tree the previous fall, but inquisitive Todd wanted to see just how the culprit did the damage. Notice that someone had painted the end of the pit and just enough of the side so that it looked finished from the house! 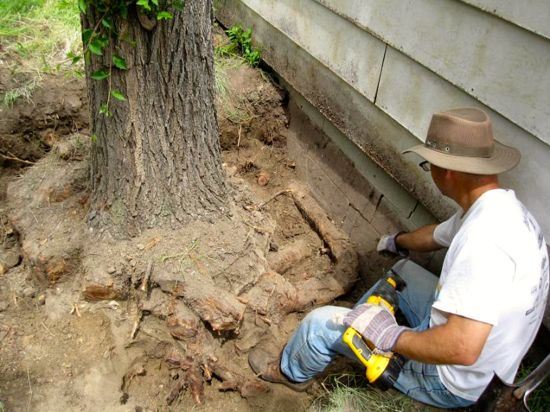 Now we can see firsthand a root the size of a large tree branch growing parallel to the wall and pushing it in. What a shame!

It was a wonderful, fulfilling feeling to have saved some of our old buildings even though we tend to be perfectionists and would have preferred everything new. However, it is doubtful we can even use the foundation of this one. It is a reminder for us all, though, to check around our house and buildings to prevent such a dilemma.