I recently posted the photo below of what was an old chicken house. A Facebook friend, Jacque Elwood, who used to live in the area, commented that she remembers the building well, and that Helen, who once lived there, always had a porch full of eggs ready for shipping or to sell to neighbors. We really enjoy hearing such memories about our little farm. 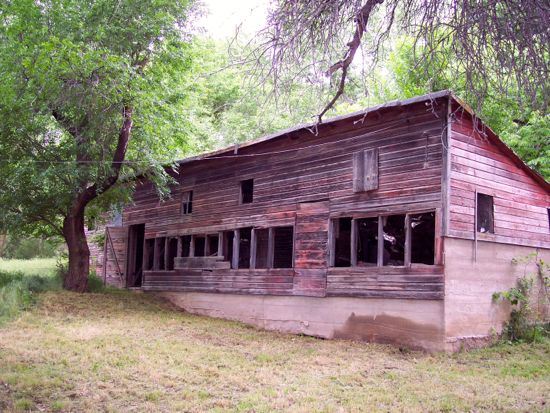 I grew up helping my mom with the chickens and eggs, so I was fascinated with the excellent setup that Helen had. This building is big, 20×50 feet, and even though the interior was broken down and contained a lot of junk, we could still see how it functioned. First of all, to have a hydrant inside would be any farm woman’s dream. Also, besides being partitioned off for nesting boxes and roosts, it was obvious that a little room at the far end was for storing chicken feed. How handy! It kinda made me wish I was Helen! 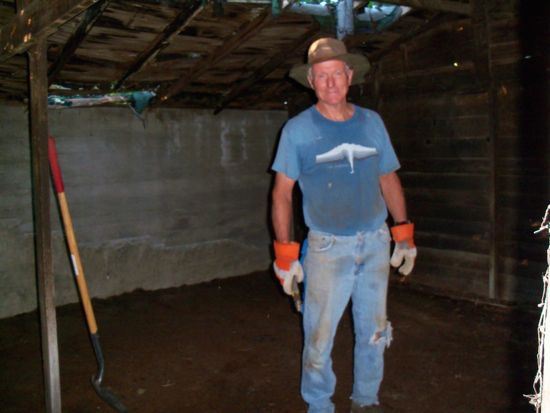 In the above photo, Larry is happy to have found the floor under all the debris, and also the date 10/6/42. That is the same year he was born!

I’m not going to linger long on the cleaning up process, but believe me, it took two days of hard work to clear out everything, only to cave in the remainder of the roof and start over again. We had help from Todd and grandchildren, Josh and Erin, which made it easier and far more fun. 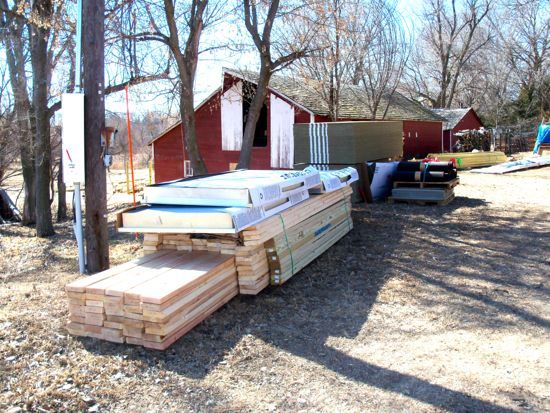 During our rebuilding process, Todd placed two large orders to Menards in Kearney, Nebraska. Deliveries are costly, so he spent a lot of time making sure he ordered needed materials for all our buildings and corral. Besides the lumber, we purchased enough metal roofing for three roofs: the little chicken house in last week’s blog, this building, and eventually the barn. The piles of materials, themselves, became messy and obstacles to mow around, but it was exciting to see them diminish as they were used. 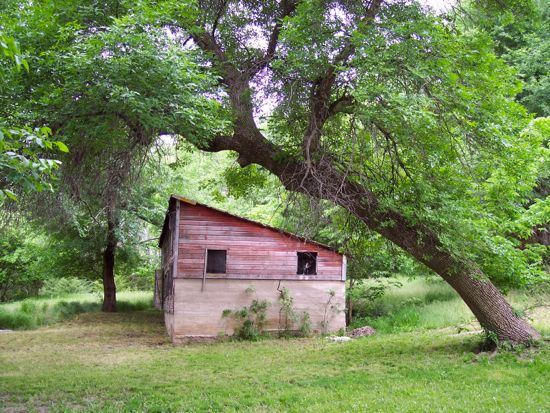 We saved much of this building. First of all, we kept the foundation even though it wasn’t the best. As you can see in the above picture, it had a big crack in the end, but the guys would fix that. If the rest of this building was to be saved, it needed a roof immediately. 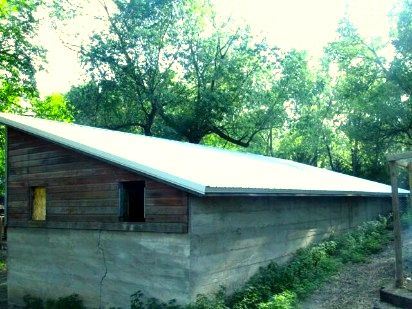 Building the roof was a tremendous job as it had to be started from scratch. Erin was only 15 at the time, but she helped her dad with the 60 rafters, which were 20-foot-long 2×6 boards that weighed 40 pounds each and had to be handled several times while being measured and cut or notched in five places and then installed. It was a lot of monotonous physical work. Later, Larry screwed the ends to the sides of the building. Todd and Nancy glued and screwed 35 sheets of plywood to the joists, stapled on the tar paper, and then Todd screwed down the steel. Now the building was protected until there was time to get back to it.

It was two years and many projects later when Todd became determined to finish the building before he moved. Here is what amazed us: He first needed to add an inside beam for extra strength. There would be no machine bringing one in and putting it into place. No, he built the 50-foot-long beam and fabricated it in three sections from 2x6s and plywood, and winched it into place himself. It fit perfectly into the notches in the rafters that he and Erin previously cut. 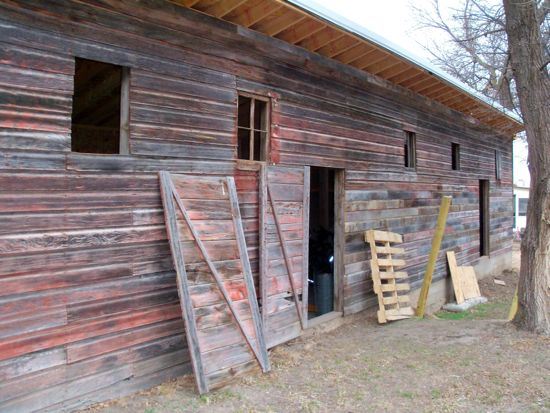 Finally, he could start the outside. We left most of the siding in place, and Larry and Todd spent many tedious hours using foam and tubes of caulk, plugging up all the holes and cracks. Remember me telling you on the last blog that Todd saved as much of the old granary wood as possible? Well, take another look at the first picture in this blog, and notice how he used the wood to fill in the front. It was so pretty, we hated to cover it with paint. 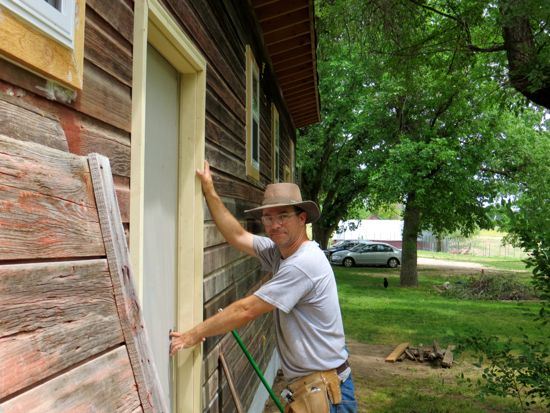 Before Todd could frame in any of the windows and doors, he first had to do some more straightening and strengthening on the inside. It was not an easy task, and working with a new building would have been much easier. 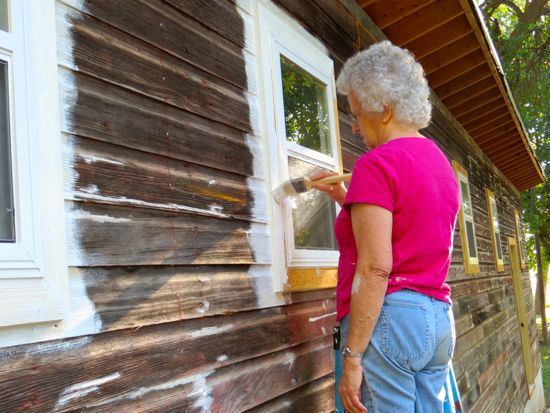 I was the patient trim person. It took lots of primer to seal this old, old wood. 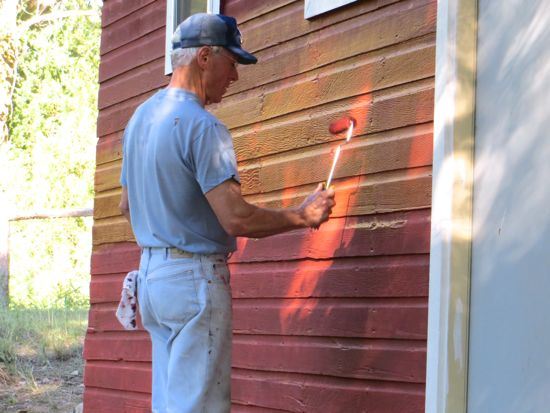 We spent many enjoyable hours painting together last summer. 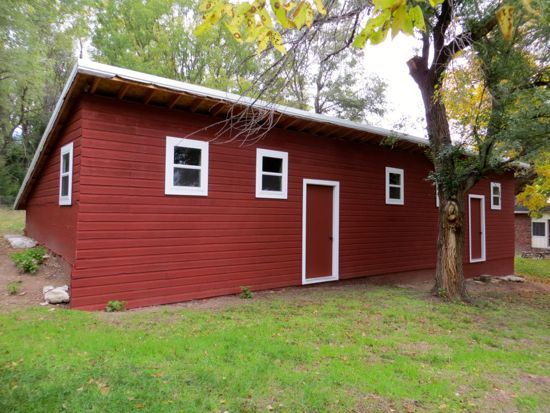 We now call the old chicken house our shop. I wish we had a picture of the finished project, but it isn’t finished! It looks rather stark, but we think as soon as we add railroad ties for steps, white cedar corner boards and white metal under the roof, it will be beautiful. 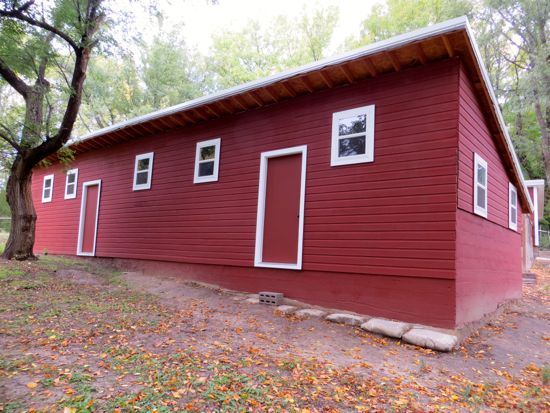 The crack in the end foundation can barely be seen. Also, notice the sacks of cement as they are a story in themselves. Not surprisingly, someone left a huge pile of them by our tractor shed, plus others strewn here and there in our north field. Of course, they became as hard as rocks and we had no idea how to get rid of them. Then we started using them to fill in around the foundations of our buildings before adding dirt. So, what once was an eyesore eventually became a big help. We hope to fill in the dirt this coming summer and add some plantings. 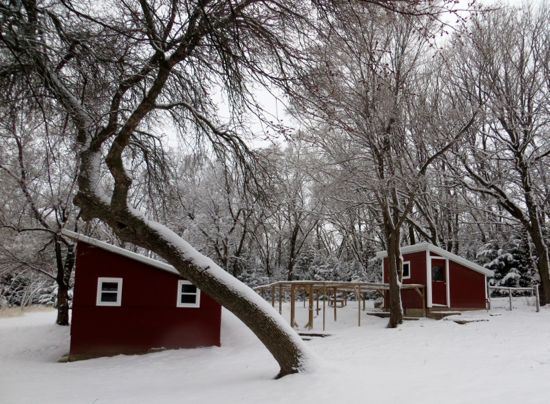 A pretty winter scene of the shop and chicken house, from last week’s blog, taken from our living room window.

I hope you enjoyed reading about the transformation of the old dilapidated chicken house. If you need to do some restoring, I think this story of Todd’s remarkable job should be an inspiration to you as he had never done this type of work before. Even though it was often mind boggling, this computer consultant took the time to figure it all out. We so appreciate his work, and are thankful that he could see the potential of our little farm from the beginning when it was such a mess.

My next blog will be about restoring the barn. Remember, it was the picture of the small red barn on the internet that first called us to this place.