Moving to the Other Side of the Rainbow

Once upon a time, we were a busy family, rushing through the days, and living life. With a blended family of four children, somebody always had something going on. We had marching band, theater, soccer, baseball, baton, pottery, volunteer events, swim meets and water polo tournaments, plus the endless meetings, practices and rehearsals that go along with these. And then we didn’t have it anymore. 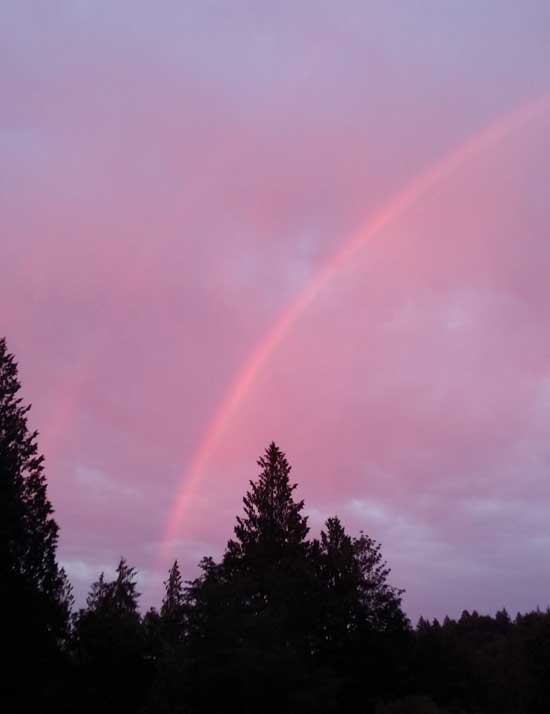 I was a teacher and loved my job. One day at work, I fell, hit my head, suffered a brain injury and wasn’t able to work anymore. Brain injuries are never as simple as television and movies make them out to be, and I don’t want to gloss over it. The reality is, it takes a long time and a lot of effort to find the new “normal” and we’ve done that. Not being able to work was the first step to building a new life.

Our two oldest children got married and started families, then our two youngest were out of high school and onto college. We thought life was about to get a lot simpler, but we couldn’t have been more wrong. After struggling for a long time to keep things going, we finally had to give up the family business.

So, recap: The children are all adults, I can’t work, and my husband, Charlie, needs to find new employment. Oh, yeah, and because of the employment issues, we’re now losing the house, too.

The amazing thing to me is that at no point did we panic or freak out. We took a good look at our situation and pulled out a map. We realized this wasn’t “losing” everything, this was our chance to change everything! Yes, things were going to be very different, and we decided we were really OK with that.

The problem was, we weren’t 100 percent sure where to start, so we took it one little step at a time. First, we decided on Oregon or Washington. This would be about as different from Palm Springs, California, as possible, but still be relatively close to our family members who were staying behind. So, now what? Rain boots, of course! Yes, really, that was my next step. To me, it was a small way of committing to the move. And it worked. Everything fell into place from there. Within six months of buying those boots, we were living in Washington!

Charlie started sending out resumes and applying to different positions, heard nothing for two or three months, then suddenly had three different job prospects. The job he accepted wanted him to start in just two weeks. That doesn’t leave a lot of time to relocate, but we were up to the challenge.

We flew up to Washington right away, giving ourselves five days to find a place. We knew we wanted to live in the country, but also knew we would have to take whatever we could get for the time being. The evening we arrived in Seattle, there was a new listing online. A rental house, on a cattle ranch, with a decent commute to all three offices Charlie would be working out of. It was the only house we looked at, and we got it!

Charlie moved up to start working, while I stayed in the desert to pack up the house. Knowing where we were going to be living, I made sure to pack my library of “I’m going to do this someday” books. Backyard homesteading, canning, soapmaking, quilting, raising chickens. Like so many other people, I was going to move to the country someday, and I was going to be ready. The difference is, now it was really happening.

A year and a half later, and it’s been everything we hoped for, and then some. We’ve built an alpaca shelter/chicken coop, and put in a fence. We have two alpacas, 16 chickens and two ducks, plus the three dogs and one cat that came with us. We had a large garden this past summer, and I learned to make and can jam, jelly and pickles. We also joined the local Spinners Guild. I’ve learned to spin yarn, crochet, make felt and do needle felting, not to mention meeting some wonderful people. Charlie is thinking about taking up weaving.

We made a conscious effort to be open to the opportunities life was giving us. We knew, no matter what, we would be “OK,” but we took the chance to be even better. We could have continued to live in the desert and struggled to make things work. Instead, we decided to listen when life told us that someday was now.

We call our little homestead Redmon Woods. From the first time we saw it, there was something magical here. Deer and coyotes cruise through the yard, herons hang out on the pond, and eagles and hawks circle overhead. The dogs chase rabbits and field mice, and the cattle hang out in the pastures around the house. It’s just like being on the other side of the rainbow. Visit us here often to see what’s new, because life really is good.

Farm to Yarn: How to Process Raw Fiber Into Yarn

Shearing season is upon us, and with it the need to process all that fiber. Ever wonder how it’s done? 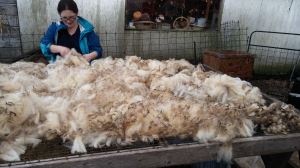