My Grandmother’s Garden and Simpler Times

Warm, sweet pea-scented summer breezes, dappled light filtering through the concord grapevine roof of the back porch, bright yellow marigolds poking their giant faces out of some of her open-lidded cold frames … so many wonderful memories of my grandmother’s garden.

My maternal grandmother lived in a very small rural lakeside community on the southern Oregon coast. About 1 mile inland and nestled against Tenmile Lake, Lakeside (creative folks were in charge of naming the town, apparently) was once a popular retreat destination for Hollywood’s elite.

The late 1930s and 40s saw the likes of Bing Crosby, Sidney Greenstreet, Bob Hope and other stars of the time gracing local newspapers and staying at wealthy producer Roy Currier’s cabins at Currier’s Village at Lakeside. His Lakeshore Lodge hosted dining, live music, dancing, and gaming in the amusement pavilion on the village pier.

“Oregon’s Coast is Heaven’s Nearest Point” claims a menu’s cover. Coffee was 10 cents in the 1940s and a good filet mignon dinner with all the trimmings would set you back $1.50 at Lakeshore Lodge.

Smokes such as Luckies, Old Golds, Philip Morris and Chesterfields were also on the menu along with Robert Burns or Van Dyck cigars. All of this must have seemed rather surreal for a rural logging and fishing town with a population of 134.

Among the menu pages of fancy appetizers (caviar!), hors d’oeuvres (caviar again!), cheeses, relishes, soups, steaks, imported wines and other bar offerings is a short list of desserts. Choices includef fresh fruits in season (Remember what that was? You know, where we only ate fruits available during their growing season here?), pie, ice cream, sherbet, or JELLO (sic). Yes, after your wonderful meal of fine American cuisine and for a mere 15 cents more, you could tantalize your palette with some delicious flavored gelatin.

Looking back on my own childhood this suddenly does not seem so strange. Visions of pineapple chunks and cottage cheese afloat in a beautifully executed molded lime Jell-O ring or an equally clever suspension of fruit cocktail in “red” Jell-O quickly come to mind. For decades American families were gaga over these congealed salads. Did you know the grocery shelves once held Jell-O flavors such as celery, seasoned tomato, Italian salad, and mixed vegetables? I kid you not.

Sadly, the former resort’s lodge and steam-heated cabins were long gone before I came into the world. By then Lakeside had reverted back to its natural rural state with a small grocery store, tavern and post office. But the lake, oh that beautiful 170 miles of forested shoreline!

Grandma sometimes rented a rowboat and took me and my brother fishing. In the 1960s the lake’s clear cold waters still gave up perch and catfish easily and much to the delight of us youngsters who had nothing more than a cheap pole and a wiggling earthworm dancing on a hook. I learned to fish and how to row so we would actually go out into the lake and not just in circles 10 feet from the dock.

Oh, and to gut and clean the fish, a feat that did not come easy to the little girl bordering on tears the first time she impaled her bait worm on the “careful, don’t shove that into your finger” fishhook.

Perch were easy enough to clean but the catfish required driving a 16-penny nail through the fish’s head and into a board, anchoring it so Grandma could skin it with her special (meaning slice-your-little-kid-fingers-off) knife. Oddly enough my real take away was the treasure of a little glass jar of formaldehyde showcasing the yellow perch egg sacs I had gleaned while cleaning one of my catches. 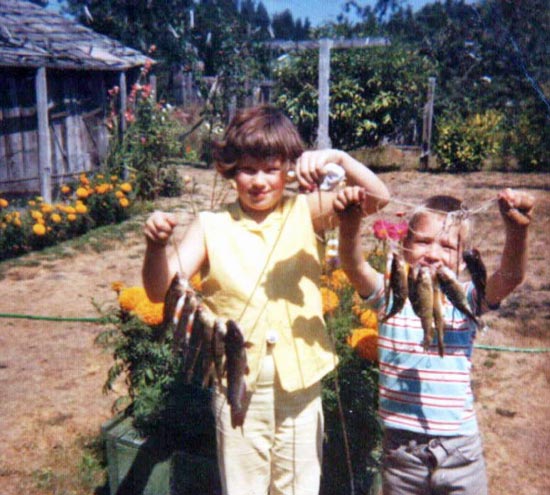 Showing off our fishing trophies in Grandma’s backyard.

Still, it was her garden that intrigued me the most. Not the movie star stories, fishing, shooting blackberries off the vines with her .22-gauge rifle, rowing, or exploring the train rails across her heavily rutted, one-lane street. Given her property was like a giant sandlot, I was even more in awe. She knew the secret of amending the soil and had carved out a multitude of garden areas scattered around her yard that entertained me for hours on end.

My favorites were the sweet peas that managed to cover the entire side of her garage every year and the clumps of nasturtiums dotting her gardens. She had Gravenstein apple trees from which she made a divine chunky applesauce, another favorite. She kept coffee grounds in an old metal coffee can in her kitchen “to feed the worms.” So many things I learned from watching her and did not even realize it at the time. Although she passed many decades ago, my grandmother continues to be my mentor and muse as I tend and nurture my own gardens. And I upped the whole feeding the worms game to a different level when I purchased a pound of red wrigglers 20 years ago. Their original repurposed camping cooler is now a fancy-smancy bin system that is occupied solely by the descendants of that original pound. Although my sweet peas have never measured up to hers – see my crazy nasturtiums! 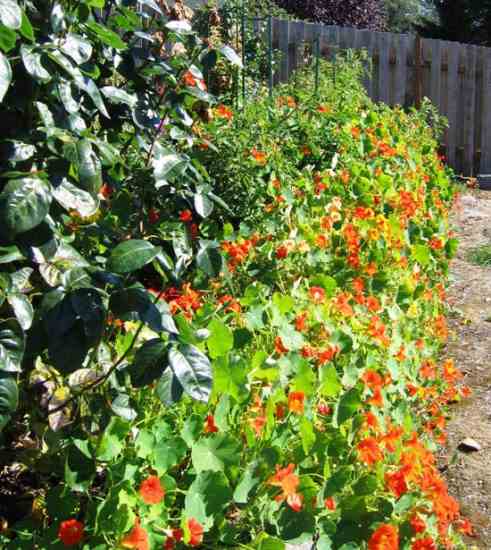 My nasturtiums take over this wall every year, and they taste great in salads!

Speaking of Jell-O: Do you remember Perfection Salad? Have a recipe?