Sure Signs of Spring

The catkins of the pussywillows (Salix) burst out of their branches in early February this year, one of the earliest spring blooms I have encountered in central MA. By early March, the furry catkins had already started to turn from a furry gray color to a more luminous yellow tinged with red, signifying the beginning of pollination. The pussy willow is dioecious, meaning there are male and female trees. The males are the ones with the showy catkins that we prefer to use for decoration. The picture below shows the catkins as they have begun to put out pollen. This early bloom attracts lots of insects, so it is a great plant to grow for pollinators. The Chinese use this plant in their celebration of Chinese New Year as a sign of growth and prosperity. 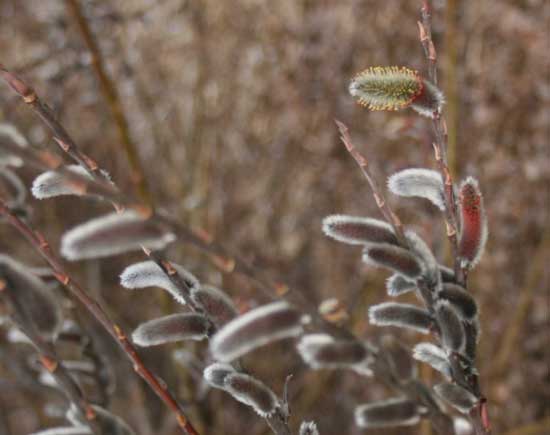 Earlier than even the pussywillow is the native skunk cabbage (Symplocampus foetidus), which begins its bloom when snow and ice have still locked most plants in a wintry embrace. The strange looking hooded spath emerges from its wetland location — a reddish-purple spire breaking through ice and snow. Pollinated by carrion-feeding insects, this plant has the ability to generate a temperature 15 to 35 degrees warmer than the surrounding air, thus helping to lure flies and bees to its pungent aroma. Breaking a leaf of this plant as it matures will give you an understanding of why it is called “skunk cabbage”. It has been used medicinally, particularly by Native Americans. 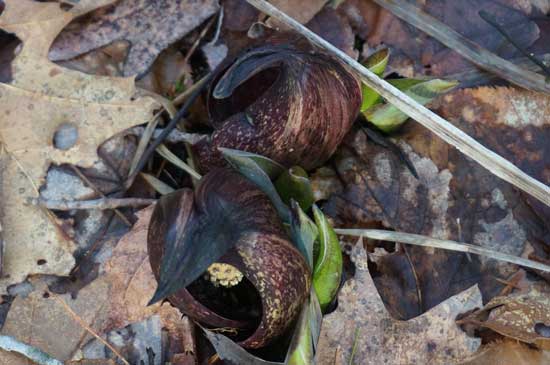 Some associate the first sign of spring with the robin (Turdus migratorious). Though migratory, meaning wintering in the south and returning to breed in the north, some colonies of birds stay year-round in the Northeast. So you may see a “local” instead of a returning bird. It was a custom in Quebec that the first person to see a robin meant they would have good luck for the year. The colonists encountered this bird when they first arrived in the New World, and associated it with the robin red-breast of England. Their robin, however, was from the flycatcher family, and only a distant cousin of the American robin, which is from the thrush family. However, they called it robin, and the name has become permanently attached to this perky bird.

A truer avian sign of spring is the arrival of the red-winged blackbird (Agelaius phoenicius). This true migratory bird usually appears in early March, and its distinctive call — sounding like “look at me” — is cheerfully heard from the tops of shrubs and reeds. The males raise their wings to emphasize the beautiful red and yellow shoulder pads — no doubt to entice the ladies. This year, they appeared at my feeders in February — early, to be sure.

But my favorite spring phenomenon is the chorus of the spring peeper (Pseudacris crucifer). This tiny little frog, only about 3/4 inch long, belts out a mighty croak, calling in the night and into early morning. This serenade begins one night with one lonely call, and multiplies nightly into a resounding chorus of “peeps” — a remarkably loud vocalization for such a small creature. This year they began their chorus March 9 — the earliest ever for me here in central MA. Some call them “Pinkletinks” and say they sound like jingle bells.

After winter, these wonderful plants and animals are a joy to behold, as they manifest the beginning of the spring season and our entrance into a new phase of the year.