The author goes in search of women who don’t feel the need to get dressed up, manicured, pedicured, made-up or coiffed to do ranch or farm chores. Women who work alongside the men outdoors in all kinds of weather and don’t sit in the truck waiting for the perfect photo-op. Women who have confidence to be who they are with no apology or artifice. Women like you. I call them The Real Deal. 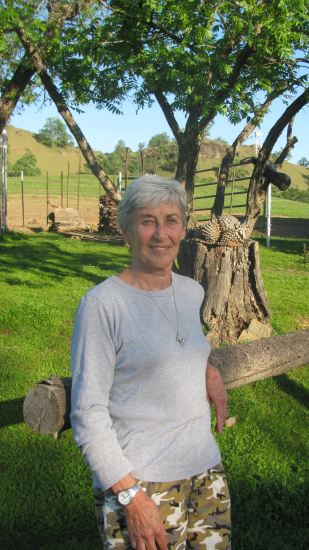 Linda Strouse-Morris at her ranch near Elk Creek, California

You don’t have to be born into the ranch way of life to make it your own and be good at it. Linda Strouse-Morris is living proof. When you meet her you immediately feel comfortable. She has twinkling blue eyes and an easy laugh. She’s small and lithe, and you can tell she’s up to a task, whatever it may be. She’s got a real can-do attitude and there’s not a phony bone in her body.

She was born in a small town in Pennsylvania in the 40s. The kind of small town where kids could run free and everybody looked out for them. Think of Ozzie and Harriet or Leave It to Beaver. Her dad was a steel worker and her mom worked at the local bakery. One of the things Linda had going for her that would eventually make her a great rancher was that she was a dyed-in-the-wool tomboy. Playing outdoors, rough and tumble, suited her just fine. As she got older her dad bought her a horse. They kept her horse out in the country at her cousins’ farm so every chance she got she was out there flying through the fields astride her pony like a wild Indian. 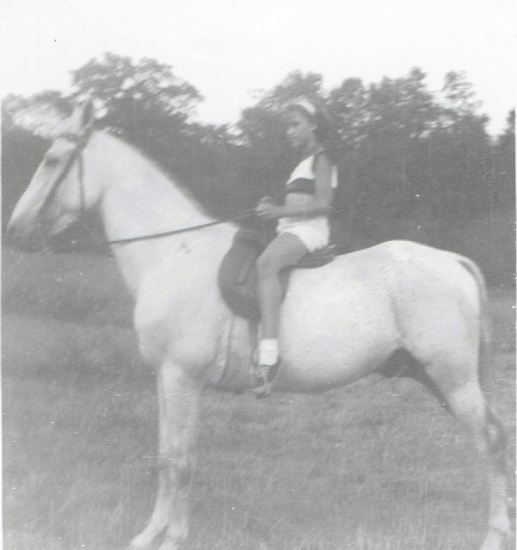 Linda at age 9 astride her cousin’s horse

It wasn’t until she was 30 that she came to the ranching way of life. Before that she lived in the city and worked as an executive secretary. Her first marriage didn’t work out but that paved the way for her to settle permanently in California. She loved living in California and worked as a single mom supporting her daughter until one day her boss, Doug Coppin, said, “Come up to the ranch.” The ranch was up in the foothills of the eastern Mendocino National Forest above Elk Creek. She went back and forth between southern California and Elk Creek a few times and somewhere in there she met Chuck Morris, who worked for her boss as a builder.

A month after they met, Chuck asked her to marry and she thought, “Well I just got rid of one” but soon he won her over, and they came to live at the boss’ house in the foothills full time. In a couple years, they acquired their ranch a little farther down the mountain a few miles west of Elk Creek. Linda’s boss had given it to them lock, stock and barrel for all the hard work they put in on his foothill ranch. It then became their task to make their new home ready for a family and what it is today.

When you drive up to their ranch today, it’s just pretty as a picture nestled in between two ridges. Chuck passed away and Linda has stayed on. The first thing you notice is how well kept everything is. There’s no baling twine holding things together. The ground cover is short and neat. The house and outbuildings are well kept. The gates are properly hung. It’s obvious someone cares and is willing to put in the time to keep it this way. Before they moved in newly married, Chuck and Linda’s home was only about 700 square feet. It had been a worker’s cabin in the mountains and was moved down to its present location. Still living at the main house, the two set about to expand and improve their little cabin. Linda worked alongside her husband, and little by little they built the house into a lovely split level bungalow, added miles of fencing, corrals, sheds and barns. They started out with 10 red and white heifers.

Linda still runs cows, about 27 cows nowadays. It’s not a big place but she tends it well with only a little assistance now and then at age 72. She was honed in hard work, and I’m sure that has made a big contribution to her good health. It’s impossible to say whether she would have been as fit if she had stayed working as an executive secretary in southern California but I’d venture to guess that she wouldn’t. There’s something about good honest hard labor. Stepping back and saying there it’s done and it looks fine. Satisfaction made three dimensional.

Somewhere along in the 43 years at the ranch they raised two children, a boy and a girl. There were the ranch dogs and cats, horses and cows. Linda did all the stone masonry around her house. She still cuts and splits her own firewood and loves her woodstove better than the central heating and AC that was installed on the house. She still gathers her cows horseback but uses the 4-wheeler for checking fence. It’s all in a day’s work for a rancher.

Through the years she has made time to become involved in organizations that benefit the community. She started the Rangeland Association with five other local ranchers. At one time it had more than 100 members but the numbers have dwindled. She was recording secretary for years and now she’s happy to sit on the Board of Directors. She’s been a member of the Stonyford (California) Horsemen’s Association for more than 20 years. They put on the annual Stonyford Rodeo, which attracts professional riders from all over the country. A few years back an artist of some renown, Manny Scarletta, began teaching painting classes in Elk Creek.­­­ Linda took classes from him for a long time and has become quite an accomplished painter.

Did you ever dream of living on a ranch?

When did you first realize that this was the life you wanted?

It was immediate. I was ready. I married the manager of that ranch (Chuck Morris, the Circle C) and after so many years this (ranch) was deeded us. The guy who owned the ranch was a fantastic man. He ran the big companies and I was his executive secretary. He sent me up here for vacation before (Chuck and I) were married. I knew all about the ranch because I did all the paperwork when he was buying it. Then Chuck came in and I met him. And he came up and then he’d come back and forth while they were getting it all set up. And then pretty soon I came up here a couple times. We have 200 acres but Doug’s ranch across the road was 1,300 acres. We had seven cattle fields that we’d rotate the cattle through. When it sold out of the Coppin family, it became the Sanhedrin Ranch.

What characteristics does a person need to be good at ranching?

(Laughing) You have to be able to duck or get behind a tree when (one of the animals) decides to chase you. A crazy old cow, an ornery old red and white face. She had me treed up under that tree one year. I was going into Angus at the time. But she treed me up in the tree, running around that tree, huggin’ and huggin’. What did I name her? She was here for several years. We started with 10 Herefords. Slowly I’ve gone into all Angus. They’re pretty easy to handle. I don’t trust their bulls too good! They’ll all be coming down. I like the Angus better than the white face.

What was it about your husband that you admired most?

Anything that he put his mind to do he could accomplish. He built this house. He could plow. He was a mechanic. All around, everything, anything that needed to be done. If he didn’t know how he’d figure it out. He was very logical. When our daughter was 16, we got a little Pinto (car) and he restored it. He got it running and painted. He could fix anything. He had a way with animals. They took one look at him and said “I guess I’d better be good.” We rode a little bit at the beginning but then he was so busy with that ranch and this that I took over all the horseback activities. The guy who used to live down the road here years ago, Kenny Niesen, he was a good guy, we rode together.

Is there anything about ranch life that you don’t like?

During branding season it’s the getting’ up early and we have people coming, friends to help, but then I would have to fix the dinners. Now that we got it down, we have a little clique, there’s only a few of us that can do the cattle so I take them to lunch at the restaurant. If I’m happy with it everybody else is going to like it, too.

What one thing would you like people to know about you?

(laughing) I shouldn’t tell ‘em, huh! Well, I’m a happy person. I’m content. Here. Very satisfied. I sit and look out my window across the room there, I look out and think this is super, I’ve got my own place, my paintings on the wall, my furniture and I’m content. What more could you ask for?