If you’ve ever experienced farm life or have had a pet, you have probably experienced the happiness of seeing a newborn and the agony of loosing an animal. I have felt the agony this week.

Garfield was a shy little cat when I met him two and a half years ago. I found him in the backyard near the property’s only tree under the IH 656. Although he was bashful, he was hungry, so it didn’t take long before I was able to pet him.

I found out later that he belonged to the neighbors. They left the windows open so the cat could come and go as he pleased. Well, when cool weather came around, the windows got shut and Garfield found himself to be an outdoor cat. The neighbors never did let him back in and before the winter was over with, they moved, leaving Garfield behind.

I put some bedding out for Garfield along with some food and water out in one of the sheds. He made himself right at home. He stayed closed to the sheds when the weather was bad and curled up on the antique tractors and golf cart trying to catch a cool breeze on the warm days.

Stubby, my first Jack Russell, didn’t like Garfield very well. Garfield learned to keep his distance. When I lost Stubby, Garfield was the shoulder that I leaned on while I cried. I did a lot of crying. When I brought Jake, my other Jack Russell, home, Garfield was my “puppy babysitter.” Jake and Garfield were the best of friends.

One-on-one time, Garfield kept me company while I worked in the garden. We also spent time in the backyard under the tree. Times were good.

I found Garfield this week, in the shed. He was curled up on of his favorite spots. He had passed over the Rainbow Bridge. I carried Garfield out to the backyard and buried him near the tree, close to where we first met. All pets are born, and at some point they die. No matter what, they always live on in my heart. 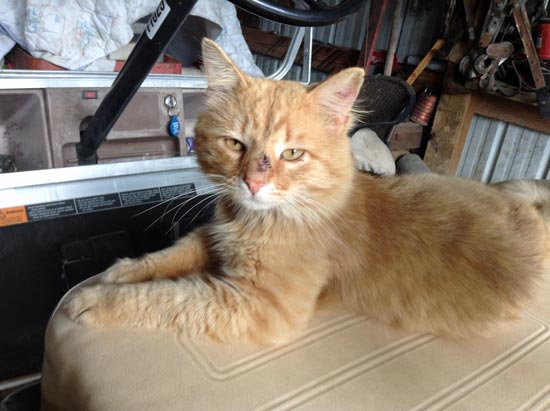