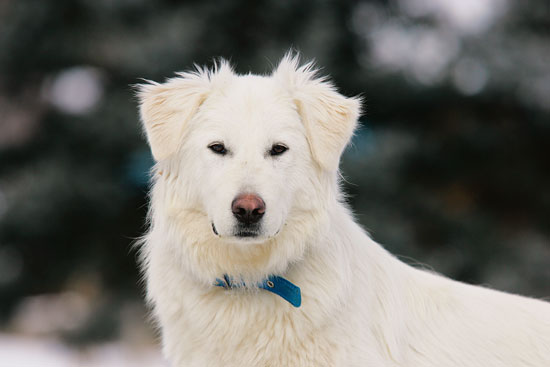 The maremma sheepdog weighs less than 100 pounds and is well-suited to work and harsh weather.
Photo by Pam Langrish
2 / 3 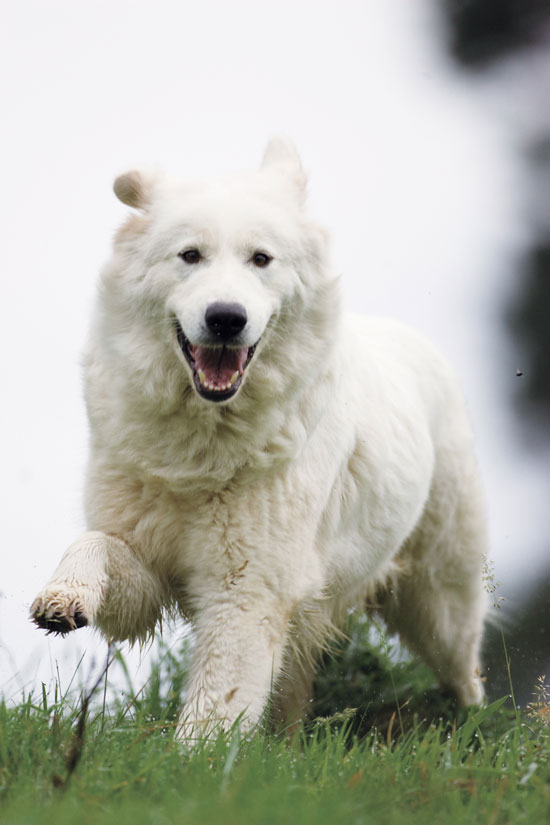 This breed is at its happiest when it’s out with its livestock.
Photo by Pam Langrish
3 / 3 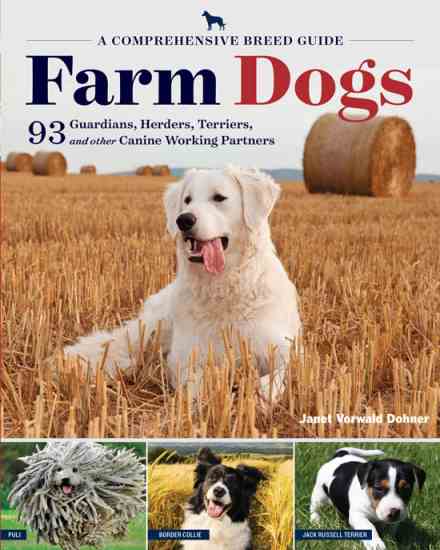 As long as there have been farm, there have been dogs bred and trained to work alongside the humans who run them. Dogs protect and herd livestock, they guard properties, they kill vermin, and they even pull carts. In Janet Vorwald Dohner’s book, Farm Dogs (Storey Publishing, 2016), there are 93 comprehensive profiles of various working dog breeds with lists of their sizes, histories, natures, and more. Learn the benefits and downfalls of certain breeds, and use this guide to determine which dog will be the best working companion for you.

You can purchase this book from the Capper’s Farmer store: Farm Dogs.

The Maremma is independent minded and protective, although not highly reactive. Even the most socialized dog needs to be introduced to strangers and still may not accept them as visitors in the future, unless his owner is present. The Maremma can serve as a general family and farm guardian, but they prefer to live outside.

The Maremma Sheepdog Club of America is committed to breeding Maremmas as working dogs and discourages the keeping of this breed as a pet. Although some breeders may sell a pup to a well-qualified but nonworking home, 90 percent of the dogs that come as rescue dogs to the United States are from pet homes.

Maremma Rescue Victoria in Australia finds that about 80 percent of their rescue dogs are from pet homes. In Australia, where Maremmas are sometimes marketed as pets, rescue dogs come from irresponsible breeders, and lack registration as they are not from established kennels breeding for show or working dogs.

Working traits. The Maremma bonds closely to his flock, which lessens the tendency to wander, although it does not negate the need for fencing. Maremmas patrol their perimeters and leave scent marks to discourage canine predators but they spend most of their time with their stock or observing them from a higher spot. He is especially suited to flock situations where he interacts with the farmer through daily routines. Owners report that their dogs are affectionate and loyal to them but happiest when they are out with their stock.

An attractive dog with a refined appearance, the Maremma is slightly smaller than many LGD breeds, with dogs rarely weighing more than 100 pounds. The head is triangular with small high-set ears that hang down. The lips, nose, and eye rims are black with a dark almond-shaped eye. The lips are tight and there is no dewlap under the neck. The tail is carried low when the dog is relaxed and rises when he is alert, although it is not carried in a curl over the back.

Coat/color. The long double coat is somewhat harsh and sheds dried mud. The hair forms a collar or mantle around the neck. Two types of coat are still seen — from rougher, longer, and wavier to shorter, straighter, and softer. In winter, the Maremma has a thick undercoat that is well suited to extreme weather. The summer coat is much thinner and can have some color changes. The Maremma is a white dog with some shading of cream, ivory, pale orange, or lemon permitted.

The big white dogs that protected sheep from wolves were well known to Roman writers. These ancient observers described the preferred white color, best size, prime age, and even the nail-studded leather collars they wore, called melium, to protect the dogs from wolves and bears. The big white dogs are also found in paintings and literature through the centuries. The breed now known as the Maremma Sheepdog traces its heritage back to these cane de pastore, the dogs of shepherds in central Italy. The Maremma region itself spreads from southwestern Tuscany into northern Lazio. The climate of the coastal western land is distinctly Mediterranean, mild in winter with good grazing.

Traditionally, as the grass withered in the summer heat, the sheep, goats, and the pastore maremmano dogs were moved up into the cooler Apennine Mountains which divide the central area of Italy from the eastern regions of Marche, Abruzzo, and Molise. On the Abruzzo side of the mountains, sheep and pastore abruzzese dogs traveled southward to the lower Apulian plains for winter pasture. Everywhere, the movement of people and animals followed a complex network of sheep tracks and cattle roads of distinct and differing sizes.

Through the centuries both the Tuscan and Abruzzese shepherds selected strictly for temperament and working ability, as well as appearance. They also guarded their best dogs against outsiders who might seek out the dogs or try to improve them. However, as sheepherding decreased, more Maremmano Abruzzese Sheepdogs began to be kept as majestic estate guardians, especially in Tuscany. Important Maremmano kennels were established by historical Tuscan families, such as the Marchese Chigi and Prince Tommaso Corsini, which lead to awareness of the breed throughout Italy and Europe.

Two Types to One

Originally, the pastore maremmano and pastore abruzzese were viewed as two separate types. Abruzzese sheepdogs were generally larger with a rougher long coat, while the Maremmano sheepdogs were somewhat smaller and lighter with a finer coat. Abruzzo pride in the native dogs was strong, although the best-known kennels were found in the Maremma. The Maremmano was recognized in 1894, with the first standard written in 1924.

In the 1950s, the Italian national kennel club made the decision to combine the somewhat heavier Abruzzese and refined Maremmano types into one recognized breed, the Pastore Maremmano Abruzzese, with a standard describing a moderate dog lying between these two types.

To some extent, these two types can still be found and both have ardent admirers. Many working Maremmanos are registered, although even today it is still possible to locate “rustic” or unregistered dogs, who can be entered in the open Italian registry. There is a commitment to preserve the working abilities of the breed as well as the genetic health through exchange of dogs bred for work or show. The breed population is now about 7,000 dogs.

Sheep are still found in the national parks of Abruzzo, as are wolves. The Maremmano Abruzzese are vitally important and can be seen throughout the countryside. Today in the

Maremma, sheepkeeping is less common; however, wolves and bears are returning and the use of dogs among shepherds is increasing. With the reappearance of the wolf in the Alps, there is renewed interest in other countries in the Maremmano’s guarding abilities. The Maremmano is also bred elsewhere in Europe for show and as family companions.

Out of the Country

In 1872, a “Roman” Maremmano was exhibited in Britain. Queen Victoria also owned a pair of these “Italian Mountaineer” dogs, reputed to be loving yet excellent watchdogs. In the 1930s, Helen Home became acquainted with the dogs of the Marchese Chigi, imported quality dogs, and supported efforts for the breed. Additional imports came from the Corsini kennels. The British Kennel Club recognized the breed as the Maremma Sheepdog in 1936. The Maremma Sheepdog Club of Great Britain was established in 1950, but it struggled with low numbers of dogs until the 1980s and ’90s, when interest was renewed and important imports were made. Maremmas in Britain are primarily family companions, especially in the countryside.

The first Maremmas were imported from Britain to Australia in 1982. More British and Swedish imports to both Australia and New Zealand continued into the 1990s. Recently it became possible to import dogs directly from Italy, which should benefit the available diversity. Maremmas have become well established in Australia, with more than 4,000 dogs registered to date and large numbers of unregistered or crossbred dogs as well. Breeding is primarily centered in Victoria, where the dogs are in demand as workers on sheep stations there and across the country. Show kennels and breeders are now specializing in working livestock guardians.

In New Zealand, although numbers are much smaller, Maremmas are used by both sheep and alpaca breeders to guard against roaming dogs and human intruders. The Maremma is recognized by both the ANKC and NZKC.

In the 1970s, Dr. Ray Coppinger imported Maremmas to the United States for the first extensive studies on the use and effectiveness of LGDs. Maremmas proved to be one of the most successful breeds in these studies. The Maremma Sheepdog Club of America was created to register the dogs and provide support for their owners. The Maremma was recognized by the UKC in 2006. Maremmas have become a well-established breed in North America, viewed favorably for the strong bonds they make to their stock and their ability to deal with large predators. They are also used to crossbreed with other white guardian breeds.

Excerpted from Farm Dogs© 2016 by Janet Vorwald Dohner. Used with permission by Storey Publishing. Buy this book from our store: Farm Dogs.