In the beginning of time when God created the animals, He gave to them a “herd” instinct that drew them together. Sheep and birds “flock” together. Other animals form a herd or colony or pack. Baboons even come together as a “congress.” (That gives food for thought…) Sometimes, animals form bonds with others outside their species. And a farm is the perfect place to find such odd friendships.

My first experience of this was as a teenager. I’ve mentioned my horse, El Blanca, who was my dearest companion for many years. Shortly after he came to live on our farm, a small black kitten was dropped off at our barn.

Farms are the perfect place for people to “dump” unwanted animals because they know that they will probably be adopted and cared for and a barn is a magnate for stray cats. El Blanca discovered the kitten first and was nosing him around when I arrived.

I am a cat person so I immediately took in the little stray and named him Shandar after a character in a Disney nature documentary about black leopards. Shandar lived at the barn and he and El Blanca formed a fast friendship. At first I would carry the kitten around on my shoulders, but one day he jumped from me to El Blanca’s back. The horse didn’t seem to mind, so Shandar settled down in the middle of his back and went to sleep.

From then on, you would find him curled up there at all times of day or night while El Blanca grazed or rested. When I would take a ride, Shandar was right there riding along too. He even went when we took the cows from pasture to pasture.

After a few years, the hazards of living by a road won out and Shandar was hit by a car. I was grieved, but didn’t realize how this would effect El Blanca. Soon I noticed him searching around the barn and making whinnying noises. Finally I realized he was searching for his friend.

I hadn’t even considered showing him the dead cat, so I had no way to explain what had happened. For the rest of his life, I would notice El Blanca inspecting every new cat that came to the barn. I don’t think he ever forgot his best friend. 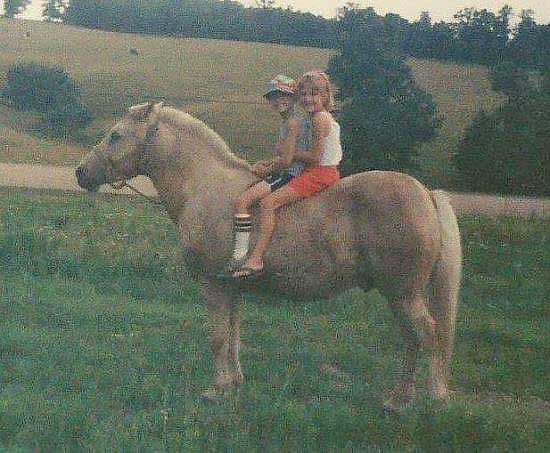 Camera film was expensive when I was young so only special pictures were ever taken, and then only by my mother. So I have no picture of my dear cat. This was taken much later of El Blanca and my children.

My next experience of farmyard buddies came in the from of another cat and a Donkey. My dad’s donkey Kate had foundered under the care of her previous owner, so she was limited to her grazing area and not always with El Blanca. Most of her time was spent alone in the barn lot and side pasture, so I’m sure she got lonely.

One day dad came to my house chuckling. “Get your camera and come see this,” he said. So off we went to the barn, and there was Duchess, the matriarch of the barn, sitting on Kate’s back washing her face. After that we saw the two of them together continually. When Duchess had kittens, Kate would lay down and the kittens would climb all over her. And Kate never seemed lonely again. 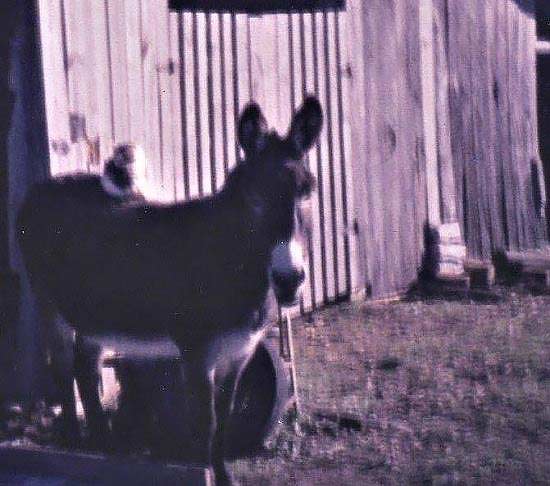 Barn cats seem to love the companionship of large four-legged beasts. When we first got our sheep, the ram Gregory was a particular pet. Rams are not usually known for their gentle disposition, but Gregory was an exception to the rule.

Sid was one of Duchess’s kittens and he discovered that sheep are soft and good to sleep on. They became friends, and we would often see Gregory grazing contentedly in the field with the rest of the flock, with Sid along for the ride. 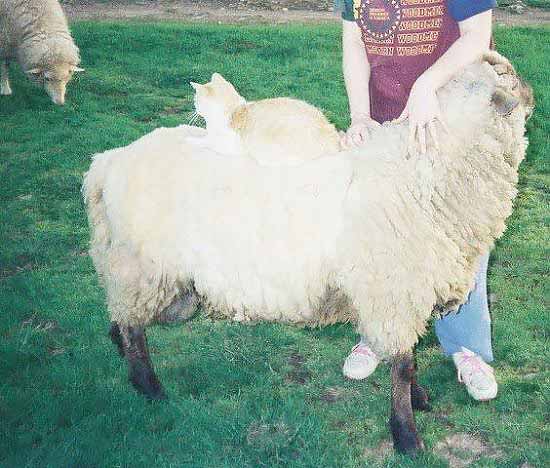 Dogs are pack animals, and very social. We’ve had many dog “buddies” in my life time, but never two quite like the dogs I have now – Huckleberry and Beauregard. Beau was a little over a year old when we got Huckleberry. Beau took to him instantly and they have been inseparable ever since. 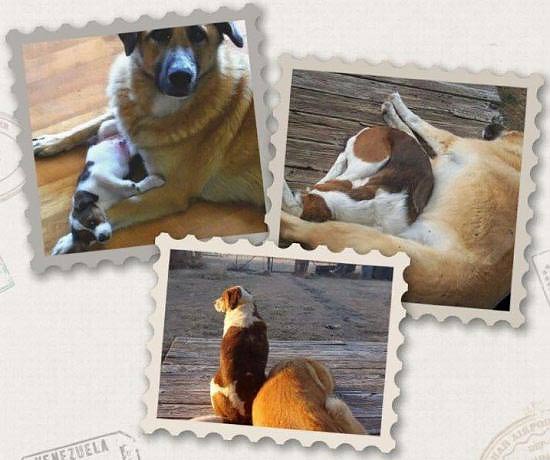 Of course, Beau does have other friends. You all know the story of Beatrice the bum lamb. She is now out with the rest of the flock, and every day she goes for our walk, tagging along right behind her best buddy Beauregard. 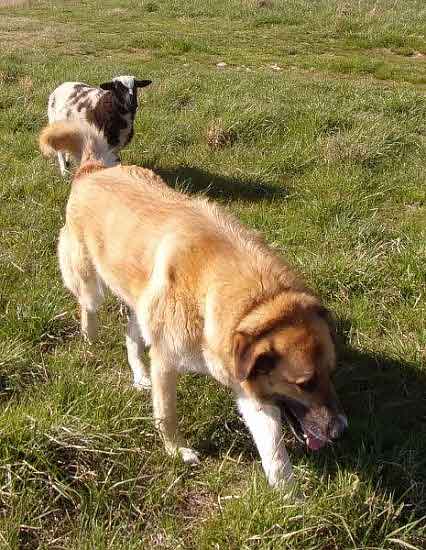 One of the most endearing friendships I have ever seen was between my two Siamese cats. Aside from El Blanca, Murphy was the best animal friend I’ve ever had. He was a Siamese that lived to be 20 years old. The last few years of his life, his eyesight failed and he was basically blind and the only time he would venture outside was with me, and then we would just sit on the porch.

DC started out as my granddaughter’s kitten, but when he was about six months old, he wondered down to my house, discovered the cat door, and just moved in. He and Murphy took to each other, and he became Murphy’s eyes. I wouldn’t have believed it if I hadn’t seen it, but DC would walk shoulder to shoulder with Murphy and lead him around the back yard.

When Murphy would stop to rest, or just to smell the flowers DC would sit and wait until Murphy was ready to move on. Eventually he would bring Murph to the steps and yowl for me to come get him. When Murphy died of old age, DC decided he would tolerate no other cats. I had Ginger at the time, so DC grudgingly allowed Ginger to stay. But once Ginger passed on, DC declared his territory and there have been no other cats since.

Bea has tried to befriend DC, but to no avail. Sometimes there is only one true friend, and no one can ever take their place. 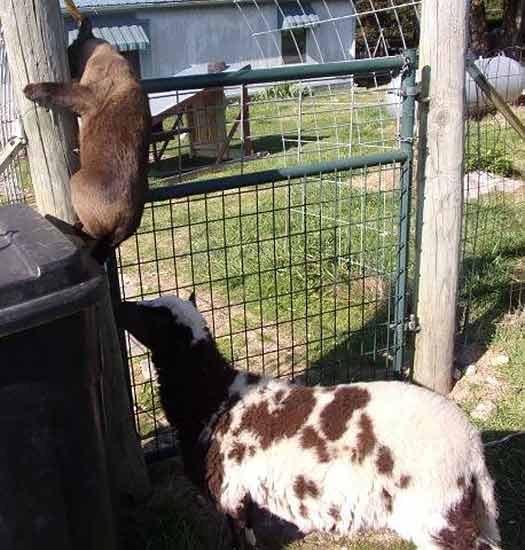 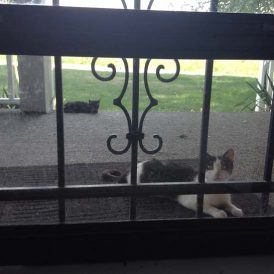 The Life of Cats

As the saying goes, cats have nine lives. Sometimes they do a pretty good job of fooling us humans. 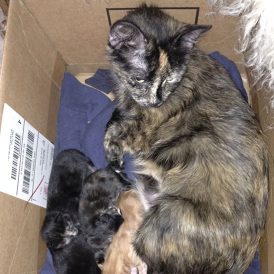 Some people are dog lovers and some are cat lovers, hence the long-standing dispute: Which makes the better pet? 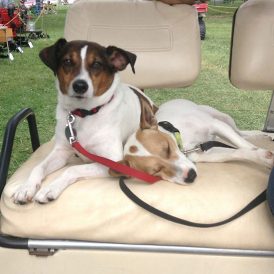