I Should Have Seen It Coming …

Really, I should have. I take full responsibility; I have no excuse.

It has been a quiet two weeks on the farm. THAT should have been my first clue! Evenings have been clear with just a hint of the crisp fall nights that will soon be upon us. Mornings just cool enough to get lots of things done before it gets too warm. How did I not know that it was really a conspiracy? How did I miss the signs, the omens as clear as day? Perhaps, if I had been born and raised in the country, I would have caught on. Being city raised and a country transplant, I didn’t have idea one. As it were, the signs zipped right past me like a wild pitch, high and outside and headed for the stands!! Runner on first!!!

In my very first blog I spoke of the things I had learned the hard way being new to farm living. Number ten was an especially trying venture when a bunch of tiny, hyperactive Guinea chicks made a break for it through a small opening left in the cardboard circle of their brooder. Long story short, they were all rounded up and have been a peaceful bunch ever since, doing the things that Guineas do … eating, sleeping, growing, making noise and pooping. I talk to them while I work around them. They tilt their little heads and look at me like they know what I am saying. “What should I write for my blog this week?” I ask them filling feeders with mash. I let their peaceful little demeanors fool me! They have lulled me into the false sense of security that I am actually in charge of the place … WRONG!!!

When things go wrong in the city, we call it Murphy’s Law … out here they must call it MacDonald’s Law, E-I-E-I-OH NO!!! I have my morning routine … get up, let the dogs out, feed the cats. Then I head out to let the Jersey Boyz out of their pen and open the sliding coop door so that the turkeys and chickens that are allowed to free range can get out. I always, ALWAYS close the sliding door after everyone is out. I change the water and feed the chicks still in the brooder. There is one lone holdout still in the rafters, and he’s starting to tick me off. “You’re pressing your luck buddy … Thanksgiving is only two months away!” Even swinging a broom at him will not budge him from his roost. His feet must be nailed down, I think. The horses are getting impatient. Neighing and running back and forth along the electric fence line. OK, I leave the turkey. “I’ll be baack!” I say in my best Terminator imitation. Time to take care of the horses, Snow and Storm. Some grain, a couple of flakes of hay and a few scritches and the girls are content. Miss Mimi is making her “BOOF” noises non stop … time for her breakfast, too. The water troughs get a good scrubbing; hot weather really gunks them up. Fresh cool water fills them to the brim. The horses come by, sticking half of their faces in the water and splashing around. Mimi follows suit and heads into her pond/wallow. She starts blowing muddy bubbles, too. Within a couple of minutes she has her head resting on a mud pillow she has formed and is snoring away. Too funny!! How fulfilling it is to see them doing so well after being so abused before. It does my heart good. 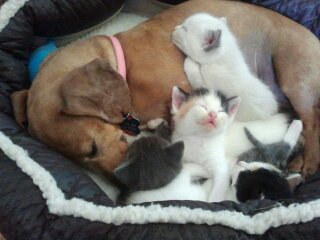 My dog, Sadie, and her adopted family.

Time for my breakfast and coffee, I think, heading to the house. Do you have your detective hats on? Do you see the crucial step I have missed here? It will soon become glaringly obvious.

Breakfast dishes are being washed as I gaze out the window looking at the turkeys running around … turkeys, quick count, force of habit … five, everyone accounted for. LIGHT BULB! I forgot to close the coop door … darn it. Out I go … I head inside to make sure that all the feeders are still full. I figure one of the big chickens may have snuck in for a quick easy meal instead of hunting up it’s own breakfast. What the??? Something is very wrong … I seem to be a little short of bodies here … lots of bodies actually. Holy Moley … there is not a Guinea chick in sight … not a one out of 18! Rafters? Nope! Nesting boxes? Nope! Where could they be? They are younger than the chickens, surely they didn’t get over the 4 foot tall panel that makes up their brooder now, did they? Out the door, around the back of the garage and there they are, all 18 of them. They are scattered around the wood pile out back, some on top, some tucked into the openings, all hunting bugs … good Guineas. My crazy cat Bitsy was raised by a dog so she thinks she is a dog. She has tagged along and now the site of all these feathered escapees is more than her kitty curiosity can stand. Before I realize it, she sneaks in for a closer look. After having her butt kicked by both the roosters and turkeys, looking is all she wants to do. The Guineas do not know this … with a collective loud squawk, they EXPLODE from the wood pile and are coming … AT … MY … HEAD!!! What??? They can fly already??? WHAT? ARE YOU KIDDING ME??? It gets better … not only are they flying … they are heading for the forest that makes up the back of my property, to the tops of the trees no less. To add insult to injury a couple have aim that would rival a turkey’s … they manage to give new meaning to the phrase “POOP HAPPENS!” I do not for one single, solitary moment think this is an accident! I have visions of a Guinea Mafia meeting taking place in the quiet of the night after lights out …”Guido, can you fly yet?” “Yeah, I’m talkin’ to you … I’m lookin’ at you, ain’t I? Better get moving on that!” “Sammy, you got that stupid turkey on board. He is gonna stay in those rafters or he’s gonna have an accident! Never know when he might just meet a bobcat.” “No one tips their hand that we can fly. Keep your feet on the ground until I say or you’re gonna be wearing cement galoshes!”

So, as I write this, the whole group is still sitting in the trees. I don’t know how this is going to end. Will they make good on their escape and stay out or will they make their way back into the coop as night falls?? Who knows? Your guess is as good as mine.

Like I said, I should have seen this coming!!!

Footnote: The Great Guinea Getaway of Friday the 13th is over, for the most part. I rounded up four chicks later that evening before it got dark. The next morning there were eight more hiding in the leaves under my camper. They were making Guinea noises so I would notice them, loud enough for me to hear, but not loud enough for a predator to zero in on them. They looked pretty sorry and walked along with my prodding them from behind like they were heading to the gallows. No attempts at flying, no running, no squawking. They were pretty happy when they realized they were heading back to the brooder where there were full feeders and fresh water. I don’t hold out much hope for the rest of the escapees, but you never know … I’m betting they didn’t see it coming either!!