A few minutes ago as I was sitting and writing at my computer I heard the familiar Ack Ack and I knew that our guineas were close by. I called out to Marty, “I think we have some visitors!” and sure enough there they were crowding our front step peering in some sort of demented Guinea way. I looked at them and said to myself, “You know if I come to greet you that you will fly away in an instant!” 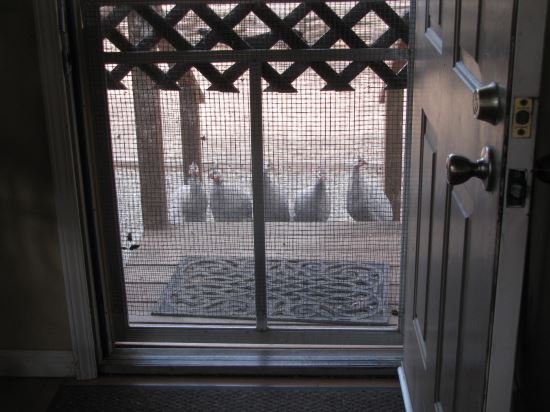 Our Guineas on the door steps of our ranch house.

Why do they peer? I don’t know. Maybe good ole fashioned curiosity. I do know one thing: Guineas have personality and then some! When they see us they immediately come over. Then a few feet from us they stop as a unit and stare. It’s like they’re saying, “Jeepers, do we really want to get that close?” If we decide to greet them and come closer they turn around and start Ack Ack Ack-ing and run away. What are you thinking, little birdie? They’re curious but they have a safe zone bubble into which one does not intrude.

Our little Guinea experiment has been a continuing success. They have not driven anyone stark raving bonkers with their unbelievably loud squawking. But they have picked clean any and all insects that come in their way which is a good thing and a bad. The good thing is recently we had spate of perfectly awful stink bugs and sure enough the Guineas came over and took care of them. 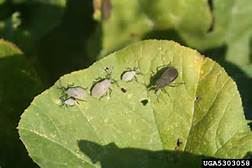 Peeee-you! Do these guys stick when they get upset!

We’ve only had one mishap. Maybe. We think we have lost one Guinea. One day “it” was there (I have no idea how to tell the gender by the way) and the next day “it” was not. Nary a feather. Nary a clue. We posited that “it” might be a hen and nesting somewhere but days have gone by and “it” has not been seen with the little rag tag bunch. We did observe that one seemed to be hanging around a bit away from the group for days leading up to the disappearance. Was it sick? It didn’t look sick. Did it get taken by a coyote or owl? We may never know.

In the mean time the Guineas stay in their area for the most part which is just what we wanted them to do. I think making them stay in the big coop near their eventual domain was key. We made them stay in there while we fed and watered them for 5 weeks. Then we let them out and placed water and feed containers in strategic nearby places so they would find the area attractive. And they do, so it’s good!

Now when they come over to our house, which is a pretty long distance from the main house, all I have to do is kind of herd them back in the general direction and in about two shakes of a lambs tail they’ll take off in a unit and fly all the way back to the main house without stopping.