For years, I’ve held a firm belief that pumpkins are one of the most fun and useful squash varieties in existence. These guys provide tasty pie, they can be carved into wicked Halloween decorations, and their innards are packed with seeds that can be roasted into a healthy snack. While I don’t have enough space on my property to grow a proper pumpkin patch, I am fortunate to live within a short drive of Swan’s Pumpkin Farm in Franksville, Wis.

Doug and I set out on a brisk and overcast October afternoon to find our ideal pumpkins. As we parked in Swan’s vast parking lot and headed toward the entrance, the clouds seem to have lifted as we sighted the expansive pumpkin patch in the distance. The Swan family and their employees do up the pre-halloween festivities right. Once a poultry farm, the Swans changed course a couple of decades ago and specialize in pumpkins, and with that came all sorts of fall events for kids and kids-at-heart. 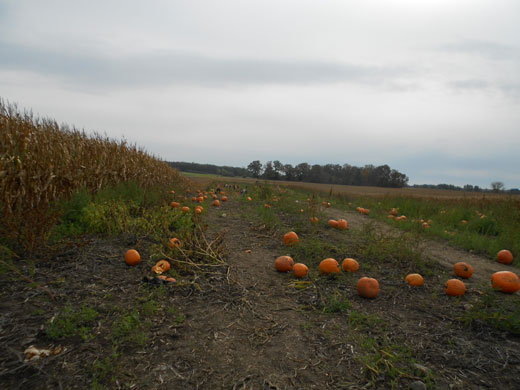 One of the pumpkin patches at Swan’s Pumpkin Farm, where we get out pumpkins every year.

While I’m certainly a kid at heart, we wanted our pumpkins. We dashed past the stage that featured a lively bluegrass band and past the line for the hayrides. We paused briefly at the concession stand that offered cider doughnuts and popcorn, but the orange in the distant pumpkin patch called us. We zigzagged around children who appeared to be in awe, and past parents who appeared weary.

Yet, I did just have to stop to pet and feed the goats at the petting zoo.

As we pushed a rented wheelbarrow through the pumpkin patch, my favorite lines from “It’s the Great Pumpkin, Charlie Brown!” came to mind. Choosing a couple of tiny pie pumpkins was easy, but for carving, our ideal pumpkins had to be just right. Each one had to have a large, smooth carving face. It had to sit just right to be properly displayed during Halloween, so we positioned each pumpkin for consideration. If it rolled or sat like it had imbibed in too much hard apple cider, it had to be passed by.

Soon Doug and I were one our way home with two pie pumpkins and three fine carving pumpkins – all for under $20.

We chose an assortment of both free-hand art and stencils for the faces on the carving pumpkins. Cleaning out the pumpkins and scooping out the pulp and seeds was the most tedious, but soon we had a colander full of seeds for roasting. I rinsed them and let them sit overnight to bake the following day. 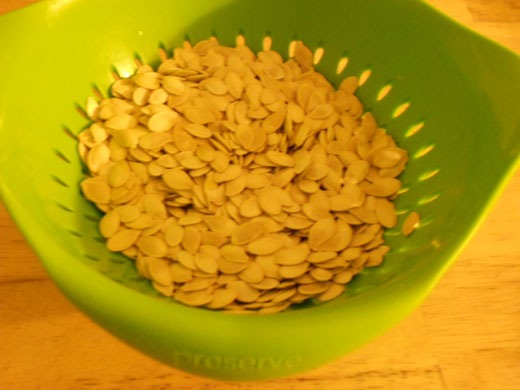 I let the pumpkin seeds dry overnight and roast them the next day.

After we drew the faces on the pumpkins and carved out the designs, they looked nice and spooky when illuminated. Our hound dog, Lenny, gave his sniff of approval, especially at “his” jack-o-lantern that featured canine-themed art of a howling wolf. 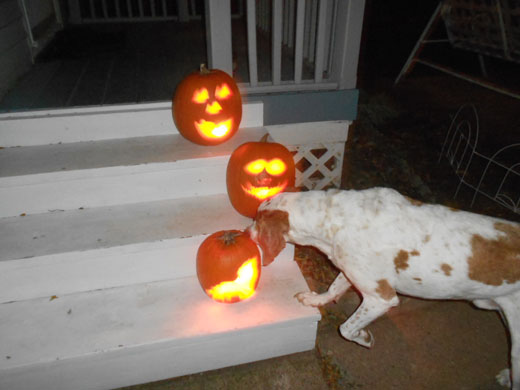 Our jack-o-lanterns are Lenny the hound-approved.

Our jack-o-lanterns would certainly impress the little ghouls and goblins who would come by for Trick-or-Treat, but my mind was on those yummy seeds yet to come. The seeds in the colander were still a little damp, which is how I liked to prepare them. My preferred method is to spread the seeds out on a cookie sheet, toss a couple pats of butter on the seeds (which, of course, melts into the seeds), and sprinkle them with sea salt. I put the tray of seeds into the oven pre-heated to 275 degrees. Every 15 minutes or so, I stirred the seeds and added a little more butter and salt, if needed. I roasted the seeds for about an hour.

The roasted seeds pleasantly scented the house and made a satisfying crunchy snack as we watched Game 4 of the World Series (I’ll keep the post neutral and not divulge which team I’m rooting for). 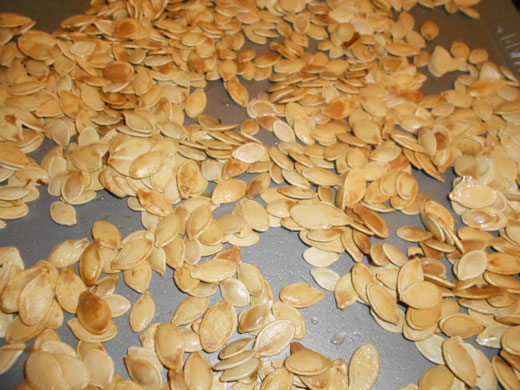 Roasted and ready for snacking!

In the past, I’ve seasoned my roasted pumpkin seeds with a seasoned salt blend from a local spice company, or turned the seeds into a sweet snack with a cinnamon and sugar blend, which gave them a scent and taste similar to the roasted almonds sold in paper cones at festivals. I’ve even gotten brave and spiced the seeds with a chipotle blend. Does anyone have other seasonings they prefer to use on roasted pumpkin seeds?