Farmers are never satisfied. The weather’s too hot or too cold, rain comes at the wrong time, we take lambs to the auction and find the bottom has dropped out of the market, a weasel squeezes through cyclone fencing sunk in concrete and kills four of my eight hens – all these things happened in the past six months, but the most frustrating has been the attack of blossom-end rot (BER) on the tomatoes. 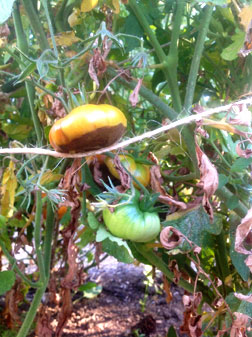 Kentucky Beefsteak tomato ruined by blossom-end rot; at least the sheep will eat it.

My husband Zack and I raise a variety of organic produce, including different kinds of squash, cucumbers, peppers, melons, okra, and tomatillos, but heirloom tomatoes are our largest crop – well, usually, as well as our most popular. Not only are they late this year, but about a quarter of our 150 plants are decimated by blossom-end rot – there’s nothing nastier than reaching through the leaves to pick a luscious red or gold tomato and have your fingers squish through a nasty, rotting brown bottom.

We have had BER before, but never like this year. We’ve read and re-read all the info we can find, and the authors all seem to offer two main reasons for the cause – either a calcium deficiency in the soil or inconsistent watering.

So now we’ll test the soil, and Zack will reconfigure the drip irrigation system and change the water timing in that section. One old-timer at the feed store told me that if we pick all the BER tomatoes and get rid of them, the second round of tomatoes will be just fine. Hey, it’s worth a try, so I diligently pick the “bad” tomatoes and throw them to the sheep.

Now, whenever I go out to work in the field, the sheep crowd the fence blatting over and over, hoping for a tomato or two. I can’t blame them – this time of year the grass is dry and dusty. We supplement their meager grazing with a flake of hay, but the pastures won’t have much to offer until those first fall rains.

Farming does bring frustrations, but then there are those other moments. Yesterday at our mid-morning break, we carried our coffee and fresh, sliced pears out to the old porch swing that hangs from an oak tree. Our funny little pup Harold shimmied under the fence to play with the newest set of lambs, twins born last week. 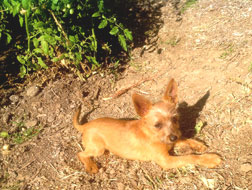 Our foundling pup, Harold Hopper – he makes friends wherever he goes, even with the sheep.

Harold Hopper is new to farm life, a gift from a very large, scruffy man who shoved him in my arms at the Safeway parking lot, saying “He’s been waiting for you all day.” Harold weighed a pound and a half then, but now tops the scale at five and half pounds. He loves to jump and run with the lambs. Much to our surprise, the ewes ignore him, though the ram took a half-hearted lunge at him. 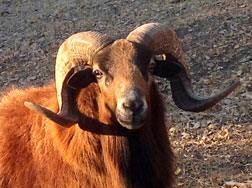 The ram of our small flock. He’s a pretty typical example of Barbados Blackbelly sheep.

A red-tail hawk flies overhead in slow, wide circles, while two ravens follow close. The red-tail calls, a familiar echoing cry and I feel at peace.