Wildfire on the Homestead

We were at a movie yesterday where there was a rancher herding his cattle across the road with a wildfire closing in. It reminded me of the days when we were at the ranch and we would watch anxiously as billows of smoke erupted in the hills above. Would the wind change? Should we evacuate now?

Today as much as ever, the specter of wildfire looms. When I kept my horses at a pasture outside a large metropolitan area, we were not safe from wildfires. Twice we experienced the threat, and twice we managed to escape. Those times marshaled us into coming up with a plan to escape should it ever happen again.

Here are my tips to help you decide what you’re going to do:

Number one is preparation. Preparation means creating a defensible space around your homestead. Clear out all brush and combustible materials at least 100 feet away from buildings. Here’s something remarkable: I’ve toured a few fire disaster scenes, and the thing is you’ll see buildings burned to the ground right next to completely unscathed ones. What’s the difference?

The difference is preparation. The buildings that escaped had defensible space. This includes no dead leaves on the roof; no firewood stacked next to the outside wall. Many homes burn because there is firewood right next to the front door on the wooden deck. This spells disaster if a wildfire ever strikes.

It makes a difference if the trees you have around your house are pine or hardwood. Hardwood resists burning. This is why resinous wood in your woodstove doesn’t last as long as hard wood. The ignition point is lower than hardwood. If you have pine trees, trim them up as high as possible. Sometimes there will be a “crown fire,” which is a hot fire that races through the tops of the trees. The fire burns right past your structures and leaves them alone. But not if embers from the trees drop on to your unprepared home.

This is what happens: The fire crew comes along and puts out any fire that is around your place. All seems well, so they leave. You’ve already been evacuated. When you come back hours later, your house is burned to the ground. What happened? Embers. Embers from a fire will lodge in non-obvious places (like wood piles stacked against the house) and not be noticed by the fire crew. They smolder, ignite, and everything goes bye-bye. Metal roofs are fire resistant. Composite shingles are the next best thing.

So let’s say you’re prepared. You don’t have any fire ladders or combustible materials near your house or barn, and everything looks good. What’s next?

Make sure your animals load in a trailer without a fuss. Panicked animals can be dangerous. It’s actually true that you can wrap a cloth over their eyes and they will be calmer. I’ve heard that some people think it’s good to let the animals loose to fend for themselves. This is a really bad idea. Maybe it worked on the Great Plains when there were no fences anywhere. I have heard of animals running back into a burning barn because that is where they think it’s safe. The other problem is that loose livestock can get in the way of first responders and cause big delays, or animals might be hit by trucks. The best thing is to evacuate your animals. Have the back of your car ready to put your dogs in. Have cat carriers by the back door. If you have a few chickens, have a cat carrier for them, too, and a leg hook to catch them quickly. Have a plan for cows, goats, and pigs. If you can, have more than one escape route planned.

If it turns out you can’t evacuate, have a shelter-in-place plan. At the horse pasture, we figured out which pastures were least likely to be chimneys for wildfire to roar up. Depending on which way the fire was going, we could choose the best pasture to take the horses. We also made sure our riding arena was completely cleared of combustible materials. Being dirt, it was less likely to cause a problem. We also had the large pond to retreat to, and we had halters for every horse and protective masks for the handlers, so we could make sure we could get where we needed to go without leaving anyone behind.

The last thing people realize is that in a wildfire there is a lot of smoke and radiant heat. Smoke and radiant heat can get you as bad as a direct flame. It can be hot, suffocating, and frightening. Sparks and embers will be swirling around everywhere, and it will be scary. Make sure you are prepared for this in case you have to shelter in place. You have to keep your head. If persons you’re with can’t keep their head and panic, it could be disastrous. If you have an agreed-upon plan beforehand, it will be easier to keep people from panicking.

Above all, listen to your first responders. Don’t argue. Do what they say. If you think it’s important for them to know things about your homestead, it’s best that you tell them BEFORE a wildfire. They will make note of it in their reference materials. 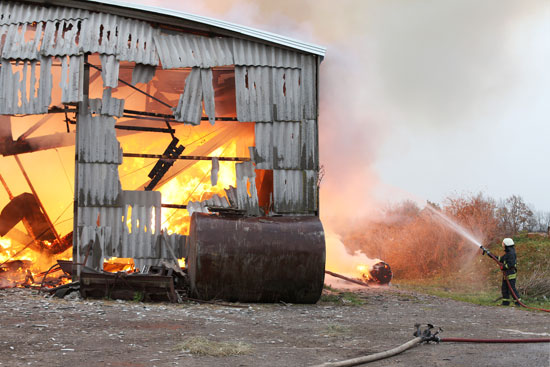 Have any of you ever experienced a wildfire personally? I would be eager to hear what happened.