A reply to Nebraska Dave:

Thank you so much for your kind welcome! Both of our Black Eyed Susan varieties are perennials. Perhaps some of those would work in your lovely garden. Good luck to you on that!

Most of three dozen ears of sweet corn found their way into our freezer following the peach sauce canning. However, to fit them in I had to remove one of the packs of rhubarb and the red currants I froze before our trip and can them. We now have 7 cup size containers of rhubarb-red currant preserves, Splenda sweetened. It tastes pretty good (though I am not sure about the Splenda taste in it) and could be used for a sauce on its own rather than just on toast, as long as it is in small doses. There is another pack of rhubarb left to can. I purchased an additional plant recently because I did not have enough to freeze for all the great rhubarb recipes I wanted to try. The other two plants are still looking great.

So I thought I would share a bit about freezing corn following up on the peach canning in the last post. We have a great tool from Pampered Chef to remove the corn from the cob once it is blanched. However it does not seem to be on their website anymore, so I am posting its picture in case you come across one sometime to pick up. A warning though, when you are tired or hurried it can slice your fingers pretty well, so please be careful! 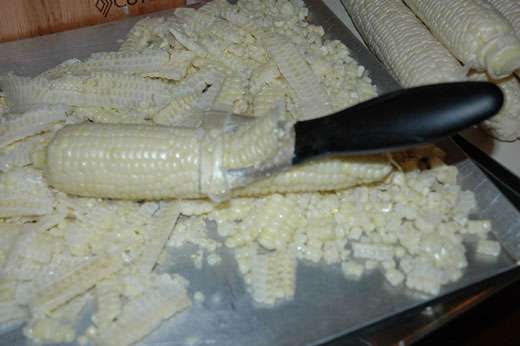 Also if anyone is unfamiliar with the blanching process, an important step is to make sure you have enough ice to cool the corn (or any other vegetable you are blanching) quickly once it comes out of the boiling water. I used almost half an 8 pound bag for the three dozen ears. Otherwise you end up with mushy vegetables when you go to cook them. Corn on the cob gets blanched for 4 minutes in boiling water, then immediately cooled. Shuck and de-silk the ears, then when your water boils place them in the boiling water for the four minutes. Immediately place into ice-water to cool. A pasta pot if available helps to keep some of the splashing of boiling water down. 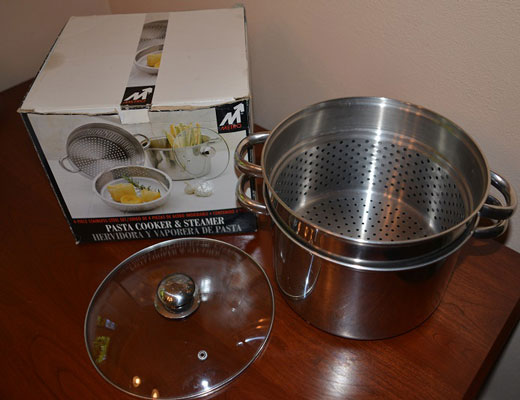 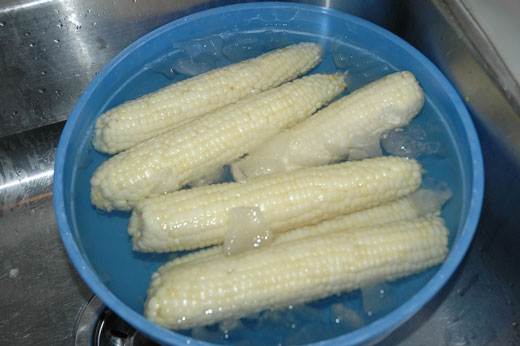 The best way to freeze it that I have found is initially on cookie sheets, then once frozen, placed into proper storage bags, ideally the kind that remove the air and allow you to keep them from getting freezer burned for a year. The Foodsaver machines work great for that.

Today I also blanched broccoli, but instead of the cookie sheet step, it was able to be placed individually by spears directly into the freezer bags used with the Foodsaver machine. These tidy little machines also help you keep your produce, meat, etc. better organized in flat (if frozen), space saving format. Broccoli blanches for about 3 minutes in spear form, shorter time for pieces. Last year I did not cool it quickly enough and learned about the mushy veggies noted above by that experience. I’m great at experimenting with things so I thought I could save some other people grief by finding out 99 ways not to make a light bulb along with Thomas Edison and passing the info onto you!