One Thing Led To Another

Dear readers, This blog is going to be just like the title suggests, and I am so excited to write it. Tickled is the word I want to use! This very morning, I felt like a little girl playing house as I fixed breakfast, and the following is the winding road I took to get there.

It started when I read a blog on Capper’s Farmer Facebook page from Steven Gregersen at http://bit.ly/1fE3bUe who told about making toast, of all things. He lives off the grid, so when he heats his house in the winter and on cold spring and fall mornings, he makes double use of his wood-burning stove and cooks breakfast on it. His problem was the toast. It never turned out right unless you fried it, and that wasn’t an option for him. Then he accidentally discovered that instead of just laying the bread on foil, if he folded the foil over the top also, it turned out as good or better than from a toaster. I made the comment on his blog that I would try it just for the fun of it the next time we went to the farm. You never know, it might be a needed and appreciated skill to have someday.

Then a couple days later, I thought, “Why only make toast? Why not cook breakfast on our wood-burning stove like Steven?” Just as a road turns, this got me thinking about skillets. Did I want to use my nice frying pan on that stove? Hey, we have two cast-iron skillets that came from Larry’s mom that are just taking up space sitting on a storage shelf! So I retrieved them, but … what … a … mess.

How to clean cast iron:

Good ol’ www. After a little research, I chose the smaller and heavier skillet and followed these instructions on how to clean cast iron: Remove the wire racks from your oven, lay a brick on the oven floor, place the skillet on the brick, and set the oven on self-cleaning. The bonus was that my oven needed cleaning anyway. You should have seen the crud on the oven floor when it was finished. (Mostly from the dirty skillet, of course!)

The next step was to rinse off all the rust and residue, and soak the skillet from one to four hours in a half and half mixture of vinegar and water. (Good ol’ reliable vinegar.) I soaked it the full four hours and the orange rust floated to the top in little pools. I didn’t waste my time while this was happening. No, I kept myself occupied with a nasty cold. After the four hours, I again rinsed the rust off, patted the skillet with a towel, and then put it back into a warm oven for a few minutes to thoroughly dry.

The skillet was still slightly orange, which the instructions said was normal, and Larry was easily persuaded to do the next step, which was to finely sandpaper off the remaining rust. How handsome this skillet looked when he finished! Larry, too!

Oh, but that was only the cleaning. Now for the seasoning. Did you know that when cast iron is seasoned, it stops rusting and becomes nonstick? Yes, a nonstick skillet without the coating that gradually comes off the pan, into our food, and into our bodies. Had you ever heard of such a thing? Amazing!

So, I began the process by rubbing the whole skillet with Crisco. Lard or oil will work, too. (Cooking oil, silly!) Then I placed it upside down into a 400 F oven for about 45 minutes, and added foil to the lower rack in case it dripped on my clean oven. Laying it upside down lets any extra grease drip off instead of making a layer of goo in the bottom of the pan. It turned out shiny and beautiful, and we were amazed as we stared at this ancient skillet that had turned gray and looked as good as new. The seasoning process can be done again if you wish, so I’m going to apply oil and put it back in the oven when I make muffins later today. 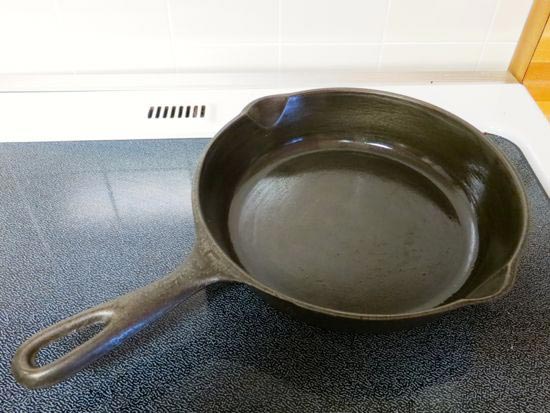 The “good as new” cleaned and seasoned cast-iron skillet.

Now for the fun part. That winding road I mentioned above took us on a 4 1/2-hour trip to the farm just so I could cook breakfast and make toast like Steven on our little two-burner wood burning stove. (Kidding!) Our “good as new” cast-iron skillet cooked the bacon and eggs as well as on a stove, and the toast experiment worked perfectly. I’m not a lover of cooking, but I had so much fun! Thanks for putting the idea into my head, Steven. It certainly was a long and eventful road from your blog to toast, but with a yummy ending! 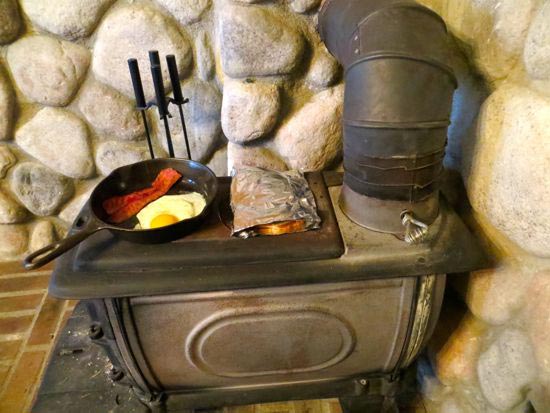 Breakfast on our wood burning stove.

BTW, I thought I would try restoring the other cast-iron skillet, which is larger but lighter, so I brought it along with me to the farm. You see, this oven needs cleaning, too!

For a delicious main dish on a chilly evening, try this Easy Meatball recipe made with crushed cornflakes, applesauce, and lean ground beef, cooked in a homemade tomato sauce in a cast-iron skillet. 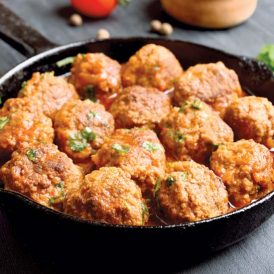 This cheese frittata recipe is great when prepared in a cast-iron skillet. 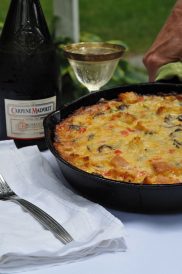