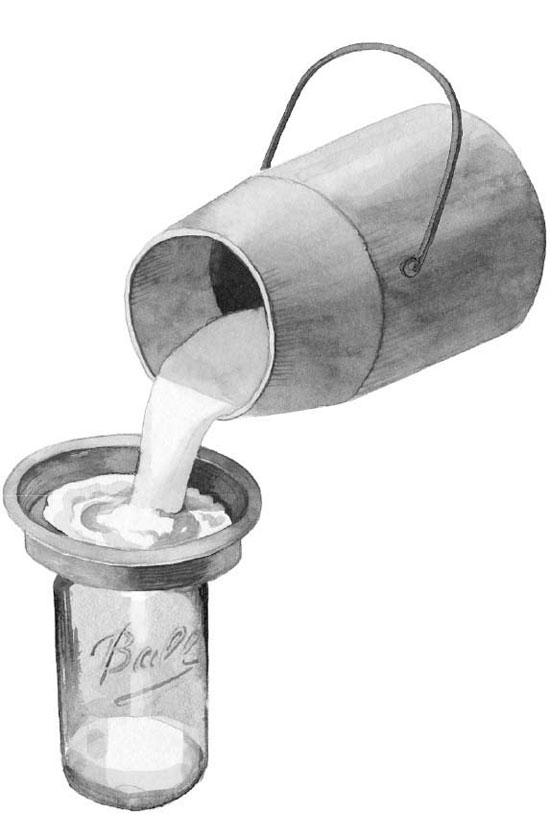 The best milk strainers are made from stainless steel and include a funnel that fits both regular and wide-mouth canning jars.
Illustration by Elena Bulay
2 / 5 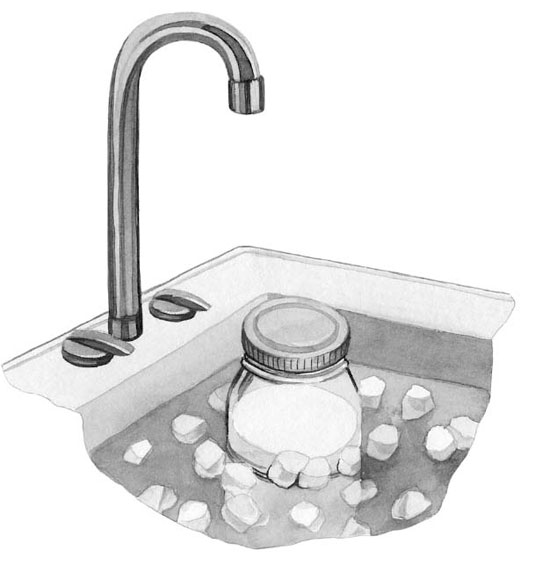 A sink basin that can be drained and refilled with more ice water easily will quickly and efficiently cool down milk.
Illustration by Elena Bulay
3 / 5 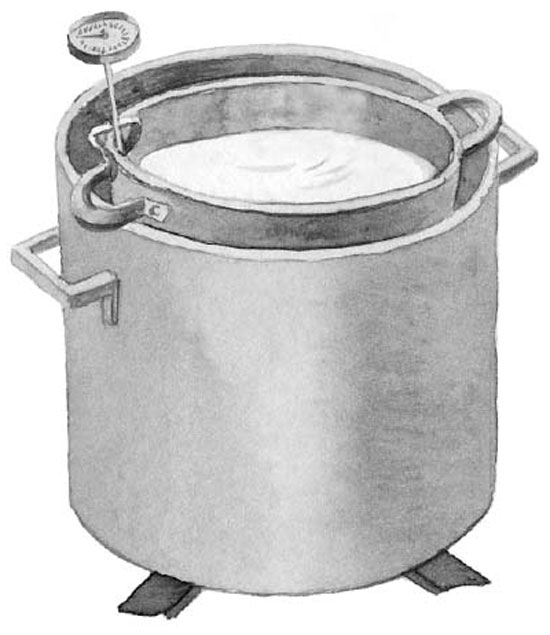 A double boiler will prevent the milk from scorching, but keep an eye on the thermometer.
Illustration by Elena Bulay
4 / 5 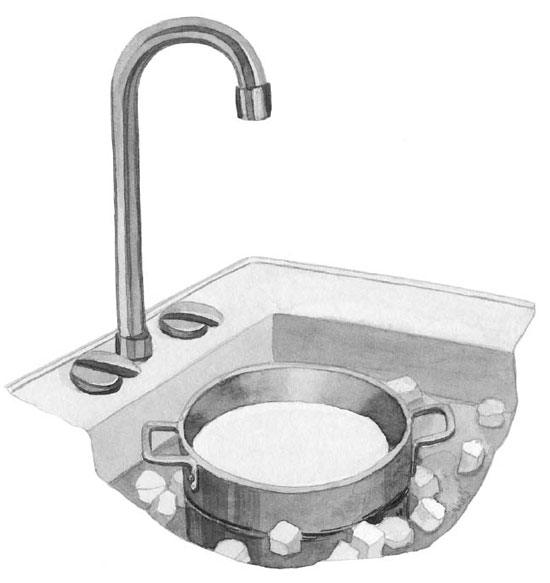 Cool the pasteurized milkquickly in a bath of ice water; don’t put it directly in the refrigerator.
Illustration by Elena Bulay
5 / 5 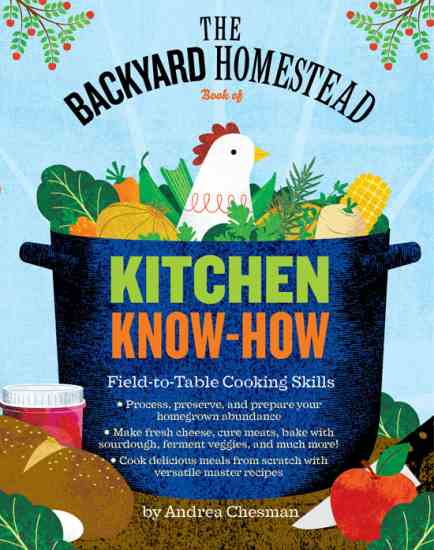 In “The Backyard Homestead Book of Kitchen Know-How,” Andrea Chesman shows you how to bridge the gap between field and table, covering everything from curing meats and making sausage to canning fruits and vegetables, milling flour, working with sourdough, baking no-knead breads, making braises and stews that can be adapted to different cuts of meat, rendering lard and tallow, pickling, making butter and cheese, making yogurt, blanching vegetables for the freezer, making jams and jellies, drying produce, and much more.
Cover courtesy Storey Publishing
❮ ❯

The Backyard Homestead Book of Kitchen Know-How (Storey Publishing, 2015) by Andrea Chesman is a simple-to-follow handbook to get curious foodies on their way to becoming self-reliant cooks and expand the horizons of experienced homesteaders. The following excerpt is from Chapter 7, “Fresh Milk.”

It is a happy homestead that can provide itself with plenty of fresh milk. You’ll enjoy drinking it, of course, and pouring it over your morning granola, but one thing is certain: when there are dairy animals in the barn, there is a surplus of milk in the kitchen. Whether you’re milking a cow or a few dairy goats, you’ll have extra milk, and you’ll have to find a way to preserve it. This creates a wonderful opportunity to make butter, cheese, yogurt, and, of course, ice cream. These preservation methods are covered in later chapters, but for now the focus is on how to handle all that fresh, raw milk in the kitchen.

On a backyard homestead you are more likely to raise goats than dairy cows because of space constraints. A single cow requires about an acre of grass, while a quarter of an acre of pasture will support a couple of goats. Even if you don’t raise dairy animals, raw organic milk, from both cows and goats, is available for sale in many states. Even if your state does not allow the retail sale of raw milk, it may allow farm sales, or it may be possible to buy a “share” in a dairy animal, which will give you access to the milk. American dairy culture is exceedingly cow-centric, so most people are surprised at their first taste of (chilled) goat’s milk, which is noticeably richer than cow’s milk. Cow’s milk contains an average of 3.8 to 3.9 percent butterfat, while goat’s milk contains about 6 percent fat, about as much as the buffalo milk that’s used to make the best mozzarella cheese. It is also completely lacking in off-flavors or odors, contrary to some people’s expectations. As long as the milk has been collected in a sanitary fashion and the buck is kept away from the doe, there is no “goaty” aroma or aftertaste.

Raw cow’s milk is generally nonhomogenized, which means that the fat globules rise to the top and form a layer of cream. You can ladle off all or some of the cream for making whipped cream or cultured cream products (see chapter 15). Shaking the jar before pouring will ensure a good blend of milk and the remaining cream. In goat’s milk the fat globules are smaller and disperse more readily, making the milk naturally homogenized. Since the cream will not separate on its own, if you want to make goat’s-milk butter, you’ll need to acquire a cream separator.

Another difference you may notice is that goat’s milk (and sheep’s milk, too) appears whiter than cow’s milk because the milk does not contain any beta-carotene. In case you were wondering, relative to cows and even goats, sheep produce far less milk — about 1 quart a day, compared to 3 to 6 quarts a day from a goat and 2 to 4 gallons a day from a dairy cow.

From Barn to Kitchen

Sanitation and rapid chilling are the keys to producing milk that tastes good, makes cheese without any off-flavors, and remains fresh for drinking for 7 to 10 days. Good sanitation in the barn means that all milking equipment is washed in hot, soapy water, rinsed in hot water, and allowed to air-dry. The dishwasher is good for this, but you can also wash by hand. Everything that comes in contact with the milk — bucket, milk tote, strainer, funnel, storage jars — should be sanitized before using.

If you are milking more than one cow, doe, or ewe, you will probably milk into a bucket and then transfer the milk to a milk tote. However you do it, you should start cooling the milk as soon as possible. A milk tote, for example, can be set in a larger container that is packed with ice or ice water to start the cooling.

Next, strain the milk. You can use a proper milk strainer, which is a funnel fitted with a mesh screen, or improvise a strainer with a reusable coffee strainer and funnel or a funnel plus strainer plus butter muslin. Strain the milk into 2-quart or smaller mason jars.

Don’t use gallon jars because the milk in a gallon jar cools too slowly. Top each jar with a plastic canning lid and label the date and time of milking (noting a.m. or p.m.). Unless you are making cheese right away, immediately chill the milk. The goal is to take the temperature of the milk from about 100 deg. F (38 deg. C) to about 38 deg. F (3 deg. C) within an hour. You can put the milk in a freezer, in a cooler filled with ice, or in a container of ice water in the refrigerator.

The circulating air of a refrigerator is not sufficient on its own for rapidly cooling the milk, unless the milk is in very small containers. Keep the milk chilled at 38 deg. F to 40.F (3 deg. C to 4 deg. C). Do not add warm milk to previously chilled milk; adding the warm milk to the older milk will encourage bacteria in the older milk to grow. The naturally occurring bacteria in milk, lactobacilli, will thrive in warm temperatures, making lactic acid, which gives soured milk its characteristically tangy taste and reduces its shelf life.

Immediately after setting the milk to chill, rinse your collection containers and filter to remove most of the milk. Wash everything in very hot, soapy water, rinse well, and air-dry. If you used a filtering cloth, boil it for a minute or two, and hang to dry.

Many people choose to pasteurize their fresh milk. Pasteurization is the process of heating milk to a high enough temperature for a long enough time to kill any bacteria in the milk. Passion runs high on both sides of the pasteurization question. Proponents of pasteurization say that it prevents illness and prolongs shelf life; opponents say that it destroys beneficial enzymes and negatively affects the nutritional value and flavor of the milk. You must make your own decision on the risks and benefits of raw milk. I think the flavor of raw milk (and cheeses made with it) is superior. I will go out of my way to buy raw milk directly from a farm, and I’ll buy local pasteurized milk over ultra-pasteurized milk, which involves higher-than-normal pasteurization temperatures and is done to further extend shelf life, even if the latter is organic (it doesn’t taste good to me).

How to Pasteurize Raw Milk

1. Set up a double boiler. Pour the raw milk into a stainless steel pot and set the pot inside a larger pot with a few inches of water at the bottom.

4. Cool. Remove the pot of milk from the heat and place it in a sink or large bowl filled with ice water. Stir constantly until the temperature drops to 40 deg. F (4 deg. C) or less.

5. Store. Transfer the milk to sterilized or sanitized canning jars, and store in the refrigerator.

High in protein and sugars, and low in acidity, milk is the perfect medium for bacteria — both the lactobacilli that we use to convert milk into cheese and the spoilage bacteria. So sanitation is key to everything you do in the kitchen when you are handling milk. To sterilize canning jars for filling with milk, submerge the jars in a large pot of water, such as a boiling-water-bath canner, and boil for 10 minutes. Or use the sterilizing cycle on your dishwasher. If you prefer, you can use a sanitizing solution (see page 13), like the solution beer brewers and winemakers use, to sanitize your storage jars.

Keeping milk chilled is critical to keeping it fresh. Whether you are storing raw milk or pasteurized milk, you should always keep it in the refrigerator. It should never sit out at room temperature. If all you plan to do with your milk is drink it, then store it in clean glass jars, 2-quart size or smaller. Every time a jar is opened and exposed to air, there is the possibility of contamination.

If you can divide your milk into 1-quart jars, even better. Kept well chilled, milk should stay fresh for 7 to 10 days.

Using Milk and Cream in the Kitchen

Depending on the size of your household, the number of animals you are milking, and the time of year, you may be faced with more milk than you need for drinking, eating with cereal, and using in cooking. In this case you can culture excess milk and cream to make butter, yogurt, or cheese, and excess milk can also be frozen. When all else fails, use up the extra milk in custards, puddings, and ice cream.