Before I talk about vegetable oil, I have to talk a little bit about soy.

I promise this will make sense in a few minutes.

I am sure that you have read, or heard that soy is sooooo good for you…. But what you may not realize is that there are thousands of studies linking soy to malnutrition, digestive distress, immune-system breakdown, thyroid dysfunction, cognitive decline, reproductive disorders, infertility, cancer and heart disease. In fact, the only soy that has any health benefits is organic soy that has been properly fermented. After a long fermentation process (like 3+ years), the phytate (this is what makes soy so scary) levels of soybeans are minimized significantly, and their beneficial properties become available to your digestive system.

When my son was little, he went through a ‘I don’t want to kill any animals’ vegetarian phase. I talked this over with his pediatrician, and he told me to be very, very careful with the products marketed as being vegetarian because most of them were jam packed with soy, and that could be very dangerous for my growing child.

I had no idea how dangerous until today! 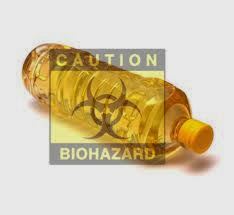 Raise your hand if you have ever cooked/baked with vegetable oil. I know I have and I also know that there are tons of products that have vegetable oil listed as an ingredient which seems safe right?? Yeah, that’s what I thought too, but what you may not know is that more times than not it’s actually soybean oil (labeled as vegetable oil) that is being used in these products that we are buying, eating and feeding our families.

Obviously soybean oil comes from soybeans; unfortunately more than 90 percent of the soy that is produced in the U.S. is genetically modified and, if that wasn’t bad enough, the crops are sprayed with a herbicide such as Roundup.

Most of the soy crop in the U.S. is used to produce soybean oil, which is extracted using the chemical solvent hexane. After the oil is extracted it goes through other processes, like bleaching and deodorizing.

For those who don’t know genetically modified organisms, aka GMO, are plants and, in some cases, animals that have been genetically engineered with DNA from bacteria, viruses or other plants and animals. One of the main reasons for GMOs is to create plants that can tolerate herbicides without dying. What I find strange is that in more than 60 countries around the world, there are major restrictions or even bans on the production and sale of GMOs. In the USA however, the government has approved GMOs based on studies conducted by the same corporations that created them and profit from their sale. Yeah, like they are gonna tell the truth ….

Roundup is the most commonly used herbicide and has been advertised by its maker, Monsanto, as being safe and environmentally friendly. Monsanto has actually said that Roundup is “as safe as table salt.” The New York state attorney general sued Monsanto for claiming that Roundup is “safe” and “environmentally friendly.” The lawsuit ended in a settlement, Monsanto agreed to cease and desist from using these terms in advertising RoundUp in the state of New York. Monsanto never admitted any misconduct, but they did pay the state of New York $250,000 in the settlement of this suit.

Glyphosate is the active ingredient in Roundup. According to Dr. Seneff, author of the bestseller Seeds of Deception, glyphosate is possibly “the most important factor in the development of multiple chronic diseases and conditions that have become prevalent in Westernized societies.”

Hexane is used in the development of glues used for shoes, leather products and roofing. It is used in cleansing and degreasing a variety of items.

Hexane is also used as a solvent in the extraction of oil from seeds (soybean, cottonseed, flaxseed, safflower seed, and others). It is sometimes used as a denaturant for alcohol. (Denaturant means: to render unfit to eat or drink without destroying usefulness in other applications.) Isn’t that just lovely?!?

Hexane has been reported to be the most highly toxic member of the alkanes series.

When hexane is ingested, it causes nausea, vertigo, bronchial irritation, intestinal irritation and can have an effect on the central nervous system.

It has been reported that 50 grams (1/2 cup) of hexane may be fatal to humans.

Think of how much of this we have consumed over time … I’m sure it’s way more than 1/2 cup!

The best way to protect yourself and your family is to read the labels; you can also visit www.nongmoshoppingguide.com.