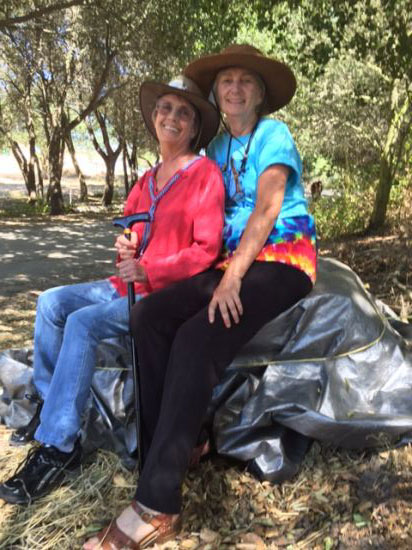 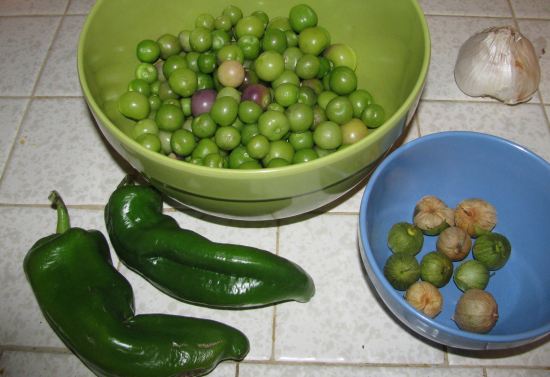 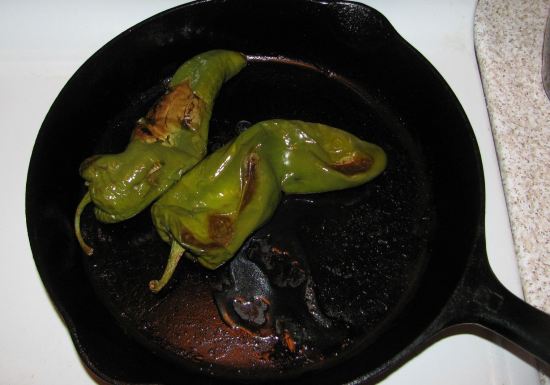 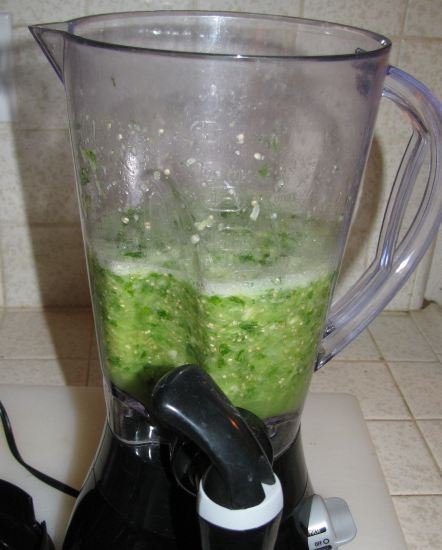 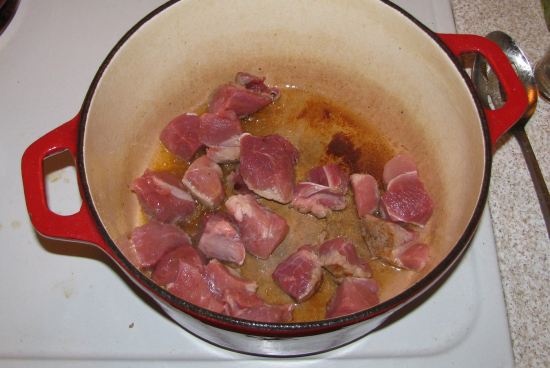 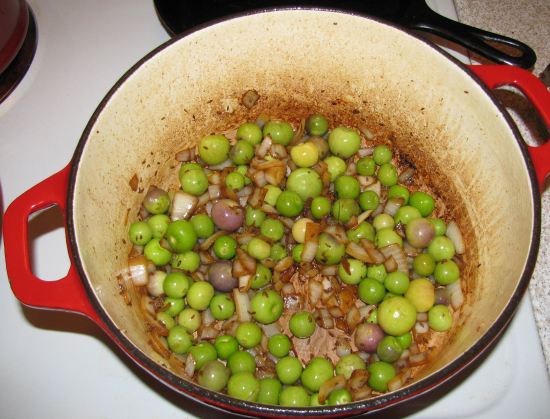 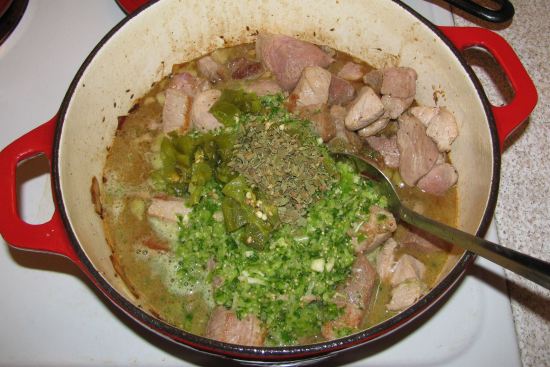 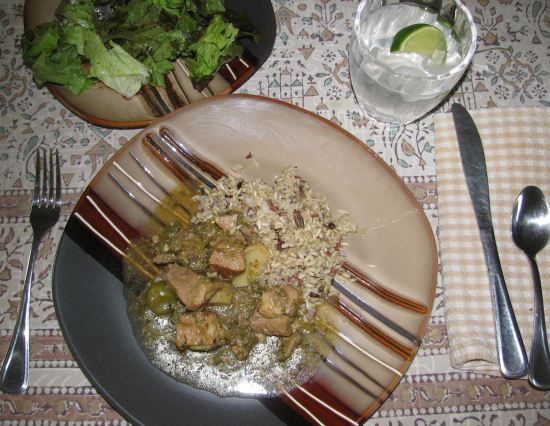 I offer this recipe in honor of my best friend Georgia Williams, who just passed away from a brain tumor. She was 62 years old. She was also my partner in horses for 30 years, and I will miss her very much. Chili Verde was her signature dish. She always made it to give away to someone in need.

• 3 cups of chicken broth (I use Better Than Boullion)
• 1 pound of tomatillos, husked and halved (I used little ones, but big ones work, too)
• 1 bunch of green onions chopped (3-4)
• 1-1/2 cups cilantro (packed)
• olive oil
• 6 garlic cloves, peeled
• 4-pound pork shoulder, trimmed and cut into 1-inch cubes (I used a lean cut of meat)
• 1 tablespoon cumin seed
• 1 large onion
• 3/4 cup roasted and peeled Anaheim chili (any MILD chili)
• 2 teaspoons dried oregano (preferably Mexican)
• 1 pound potatoes, cut into 1-inch cubes (Yukon Gold are nice, but I used my homegrown ones. I also pre-steamed them so they were already cooked.)

1. Prepare the tomatillos by turning on the TV to some non-riveting program, and then sit there while peeling each tomatillo by hand. Of course, the TV is not necessary as peeling the tomatillos in silence is a very meditative process. The husks come off easily but will leave your hands sticky, so have a towel nearby. Don’t wipe your eyes. The tomatillos are not noxious, but the sticky substance will not be good to get in your eyes. Rinse the tomatillos under cold water. Set aside.

2. Prepare Anaheim chili’s by oiling them and putting them on a roasting pan in a 325 degree oven. You can also fire-roast them over a BBQ grill. When the skin turns brown or blackens a little, let them cool and then peel the tough outer skin off. Chop up the soft inside. Set aside.

3. Puree 2 cups of chicken broth, 1/4 of the tomatillos, green onions, cilantro (stems are OK), and garlic in a blender. Set this aside. We’ll call it salsa verde (which means “green salsa”).

4. Brush a heavy pot with oil. Heat it over medium heat. Sprinkle your cubed meat with salt and pepper. Then, working in small batches, brown your meat. Put the meat aside as you brown it until it’s all done. If there’s a lot of fat in the pot, pour some off until there’s only a small amount. If you use lean pork, you may have to add oil.

5. Then add your onion to the pot and sauté until it is soft. Sprinkle your cumin seeds over the onions and cook until onion is golden brown and not burned. Add remaining tomatillos and cook until soft and maybe browned in a few places. Don’t let it burn.

6. Add the pork with juices back in, and add 2 cups of the green salsa, 1 cup of broth, chilis, and oregano. Cover and simmer over medium-low until pork is tender. About 2 hours. You can also put the whole shebang in a crock pot and let it simmer all day.

Note: This is really good re-heated, so if you want to make it a couple days ahead that’s purr-fectly okay.

7. When to add potatoes:

I pre-steamed my potatoes, so after about a couple of hours of cooking the stew, I then add the potatoes. They just need to absorb the flavor, so you don’t need to cook the heck out of them. If you’ve used potatoes that hold their shape, they won’t disintegrate (like baking potatoes would).

8. Stir in remaining green salsa, season with salt and pepper, cook another half hour.

9. This is good over rice, with tortillas, in tacos or burritos.