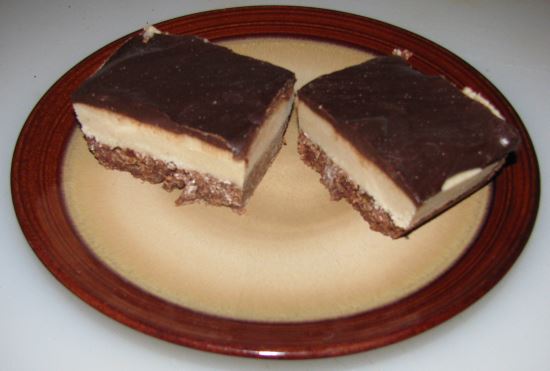 Here’s a great recipe for hot summer nights. It’s frozen. What could be better? Plan ahead because you have to freeze it each time you add a layer. For example, it might be best to start in the morning if you want to eat it at night.

This frozen treat has its own page in Wikipedia, that online encyclopedia. I suppose every famous cookie has its own, but I think it’s kind of funny. I grew up in the days when every child worth her salt had her own Encyclopedia Britannica or World Book in the family library. I can’t imagine cookies being in an encyclopedia but maybe they were. I was too busy studying the natives of New Guinea with the amazing bones in their noses! Cannibals! Now that’s a worthy subject. We didn’t have any of those in Iowa and I hope we don’t have any now.

My version is vegan and gluten free.

So it amused me to see that the humble Nanaimo cookie bar has its own Wikipedia page. I first tasted Nanaimo Bars when we were in my dad’s home province of Quebec, Canada. Dad grew up in Quebec on the Ottawa River right across from Ontario. The bars were super scrumptious if you like the combination of almonds, coconut and chocolate. Now that I think of it they are the same flavor as Mounds bars. So there ya go. If you like Mounds bars you’ll like Nanaimo bars. Wikipedia says they are “Canada’s Favorite Confection.” They get their name from the little town of Nanaimo in British Columbia where someone won a prize for making them. The city makes their claim to fame by posting the recipe on their website.

In 1954, the recipe “Mabel’s Squares” was published in “The Country Woman’s Favorite” by the Upper Gloucester Women’s Institute in New Brunswick, Nova Scotia. The recipe was submitted by Mrs. Harold Payne, the daughter of Mabel Knowles Scott (1883-1957). The ingredients list, quantities and method closely match the recipe found on the City of Nanaimo website.

My recipe is the vegan, gluten free and low carbohydrate version.

For the crust: Add everything to your food processor and process with the knife blade for a few seconds to blend. It should stick together slightly. Add a little water if you need to or a couple more dates. Press into a 9-inch-square pan. Put the crust in the freezer.

Filling: Add cashews, water, maple syrup, vanilla, coconut oil and salt to food processor fitted with knife blade. You can use a blender if you don’t have one. Blend until smooth and creamy. Pour over crust and smooth. Freeze for 2 hours.

Cut and serve. Serves 9 to 18 depending on how big you make the bars. 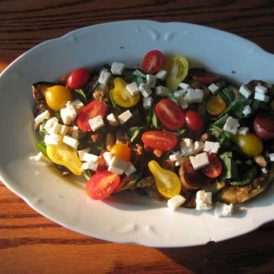