Fall has arrived, and another school year is beginning. I saw the bus go by this morning and it brought back memories of my daddy, Arvil Roberts.

As I’ve said before, Daddy was born on Old Home Farm in 1920. He went to school at Bruno, which is the first agricultural school in the state, and graduated in 1938. He joined the WPA and helped to build the agri building and shop, not realizing that one day he would actually work there.

Daddy was drafted into the army in 1945 and took part in the D-Day invasion. His division, the 448th AAA BN, landed on Utah Beach and linked up with General Patton’s troupes on their march across France and into Belgium and Germany. They wanted Daddy for a sharpshooter, but he declined, so he became an anti-aircraft gunner. Later when they discovered that he was a good mechanic, he became a driver for the officers as well.

After the war, Daddy came home and settled back into life on the farm. He used his savings to build a barn on the homestead, and got a job driving a milk truck for Carnation. He traveled lots of dirt roads picking up milk cans from the various farms. But Daddy also did more than that. He ran errands for people who couldn’t get into town. They would send grocery lists, or bunches of letters and he would go to the post office for them, and bring the groceries and mail when he came back the next day. He also gave lifts into town when needed, and would take them back home if necessary.

Daddy enjoyed this job very much, but what he really loved was doing mechanic work. So when the job of bus mechanic came open at the school, he applied and got it. Daddy had no formal training as a mechanic. He told me that he when he was 14, he worked the entire summer for a neighbor to earn enough money to buy a Model T. He worked on the family farm until around noon, then after lunch he went to the neighbor’s field and worked until dark. It was long hours, but well worth it. He bought that Model T for $12.

Once he had the car, he promptly took it apart to see how it worked, then put it back together. As he grew older, he hung around older men who knew how to work on cars and learned from them. By the time he obtained the job of bus mechanic, he could take a motor apart and put it back together in his sleep.

In addition to being the bus mechanic, he also drove a bus route. At one time or another, Daddy drove every route there was for the Bruno school. And because of his previous job with Carnation, he knew exactly where everyone lived. I spent many hours riding those buses with him, even before I started school. I would sit beside him on the heater, and he would tell me about the people who lived in the houses we stopped at. Daddy came home every day for lunch — the Bruno School is less than a mile from our home — and if it was a nice day, Daddy would let me play in the shop until lunch time.

Daddy always came home for lunch. Then he would take an hour if he didn’t have work waiting for him, and do some farm chores. We had around 30 head of cows that we milked, so Daddy was up at 4:30 every morning to milk, then on the road in the bus by 7 a.m., and back in the barn by 6 that evening. It was a hard life in ways, but Daddy loved it.

I can close my eyes and still see that old shop, set into the hill under the agri building. It smelled of motor oil and was filled with all manner of tools. I still have most of those tools. There was a big crane on wheels with a sling that Daddy used to pull a motor and move it to the work bench to work on. If I was very good, Daddy would hoist me into the sling and push it around the shop for fun. There was also a large, long, flat board on caster wheels for sliding up under the bus so Daddy could work on the undercarriage. Daddy simply called it a “dolly,” but I think its called a “car creeper” now. At any rate, I would play on that if it wasn’t in use and either ride it around the shop, or stand on it like a skate board.

Daddy actually taught a lot of boys about mechanics. If the high school boys had all of their homework done, instead of study hall they were allowed to go to the shop and Daddy would teach them about motors and how to take care of a car. A few of them even went on to trade school and became mechanics themselves.

Daddy had the reputation for never failing to run a bus route, no matter what the weather. We didn’t have snow days when I was in school. The bus drivers ran as much of their routes as they could, and we had school with however many kids could get there. And the teachers never missed, either. Sometimes, they would actually ride one of the buses if the route ran past their house.

I remember one icy winter day in the bus. We were coming up out of Cape Hollar and Daddy couldn’t get up the hill, even with the chains he had on the wheels. So he and the older boys loaded the back of the bus with huge rocks, and then all of us kids sat in the back seats and Daddy began the slow climb up the hill. We never slid at all, but went right up over the top. Then Daddy and the boys unloaded the rocks, everyone went back to their seats, and we continued the route.

When Daddy had trouble with someone, he would make them stay on the bus after everyone unloaded at the school, and have a talk with them. I knew all about Daddy’s talks. He never raised his voice or used bad language or verbal abuse, but when he was done, you wished he had just spanked you instead. No one ever had to stay behind more than once, and the offense was never repeated.

And at Christmas time, Daddy always had a special treat for his kids. We would save money all year then go to the wholesale store in Harrison and buy hard Christmas candy, chocolate drops, apples, and oranges. Then the night before school was dismissed for the holiday, we would stay up late filling paper bags with these goodies. At the end of the day as each child got off the bus, Daddy would give him or her a bag for Christmas. And if the child had small brothers or sisters at home, Daddy sent one for each of them as well. Daddy grew up in the depression, and knew how much small acts of kindness could mean to people. He taught me to love my neighbors, be good to my enemies, share whatever I had with those less fortunate, to give 110 percent on the job, and to be honest at all times. And in 1997 when a brain tumor took his life, Daddy taught me how to die. Daddy will always be my hero.

A visit to a guest farm in the Ozark Hills. 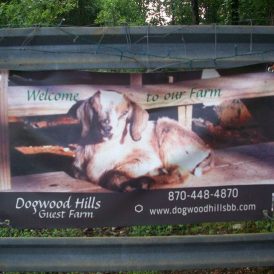