A Hunting We Will Go

As I’ve said before, country people live by the seasons, both natural and man-made. Its hunting season here in the Ozarks. One of the favorite times of the year.

I was hunting long before it was really acceptable in my neck of the woods for a girl to hunt. I grew up in the ’60s and ’70s, and at that time girls were still treated like porcelain dolls. We were not allowed to play baseball, full-court basketball, or any other strenuous sports. And we certainly were not encouraged to hunt! But I was the only child of a wonderful man whose best friend had been his sister. So he taught me all the things he would have taught a son, including how to shoot and hunt. In her younger days, my mother was Daddy’s hunting companion, but when I got old enough, I took over the role.

Daddy and Mom with a brace of squirrels

Daddy was a crack shot. He was so good in Army basic training that they wanted to make him a sharp shooter, but he declined. He became an anti-aircraft gunner instead. His first rule of hunting was kill it with one shot. My Daddy loved wildlife and could not stand for anything to be wounded and in pain. He also told me that stray bullets were a dangerous thing. At age 11 he gave me a .22 and told me to learn to bull’s-eye every time. Then I could go hunting.

It took me nigh onto a year, but I finally got good enough to satisfy him, and we went on our first squirrel hunt. That’s when I learned Daddy’s second rule of hunting: Don’t kill more than you will eat. We always had excellent hunting dogs (trained by Daddy) and they would hunt squirrels all day. Of course I was carried away by the experience and after we had bagged half a dozen squirrels, I was surprised when Daddy called the dogs and said lets head for home. When I protested, he explained that a good hunter is one who respects the wildlife and never takes more than will be eaten. Then he explained his third rule of hunting: Don’t kill it unless you are going to eat it, or unless it is a threat to your livestock.

When we weren’t hunting, we would go for walks in the woods, and Daddy showed me borrows and told me what lived there. We looked for nests in trees, tracks on the ground, and he told me the importance of leaving brush piles for things like skunks, and other small “critters” to make a home in.

Besides squirrels, we also hunted rabbits, and Daddy hunted quail. I never shot at quail because the shotgun kicked too hard. We never hunted deer. At that time hunters ran deer with dogs. There was no sitting in a blind or tree stand and patiently waiting. Daddy hated the practice of running deer, and was greatly relieved when it was finally banned in our area.

Daddy was 76 when we went on our last hunting trip. He missed his squirrel and had to kill it on the ground. He stood there just looking at it for a few minutes, then handed me his gun and said “I’m done.” He died a year later from a brain tumor.

I haven’t hunted since that time either. My husband is also an excellent shot, but he grew up hunting elk in Colorado, so Arkansas deer just haven’t been a challenge to him. But my daughter has carried on the tradition. She and her husband hunt every deer season, and all of their three children have bagged some really nice bucks. They also live by Daddy’s hunting rules. Daddy would be pleased.

A look at barns in my area and how they are vanishing from the landscape. 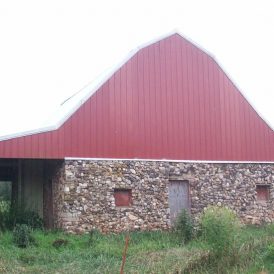 Music On The Square 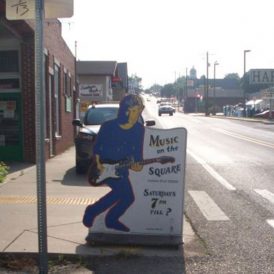