A Tribute to My Mother on Mother’s Day

I think of my mother and mother-in-law more and more as I get older, whether I want to share something we are doing at the farm, or wishing I could ask them questions. When Larry and I process sweet corn or do any canning, we wonder how they did it all, often by themselves and with little appreciation. They were true hard-working women of the past.

My mom only went to school through eighth grade as she had to quit to help her mother who came down with shingles. I heard her stories often of how she learned to make pickles, hominy and sauerkraut. She became a good cook, and was well-known for her homemade cinnamon rolls, pies, fried chicken, and chicken and noodles. When she was in her 90s, she told me she remembered feeling sad when she couldn’t finish school, but looking back, she realized that helping her mother taught her all she needed to know to take care of her own family during the Depression.

A story I often heard from Mom was that she made nearly all the clothes they wore. Even underwear. My favorite sewing account, though, is how she would buy a large piece of blue cotton fabric and then cut out Dad’s and all five boys’ shirts from it. She would lay out the patterns for the big pieces first, and then arrange and rearrange the patterns for the smaller boys until they all fit. Of course, if there was a scrap of material left, it would be saved for patching or a quilt block.

Following five boys, I was born when Mom was 40. Yes, she finally got her girl, but always said that she never expected to live to raise me. Yeah, yeah! How many times did I hear that? Then she lived to be almost 97! 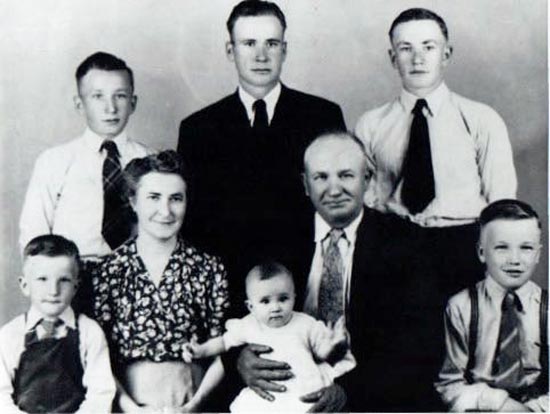 A mother’s heart: I was born December 1, 1941, just prior to the attack on Pearl Harbor. Mom had the above family photo taken the following June, a few days before my 20-year-old brother left to serve in the Army. Soon after, my next brother enlisted in the Marines, with parental permission, before he was 18. My third brother wanted to serve, but was rejected because of a minor medical problem.

Larry and I never experienced sending any of our boys off to war, so I can’t begin to understand how my mom and dad must have felt. I learned a valuable lesson from watching them over the years. They didn’t give up on life. They quietly continued doing their work no matter how much pain they were in at the time. I often say to myself, “This, too, shall pass.” They taught me that without realizing it, and I feel it is the greatest lesson a parent can teach a child. 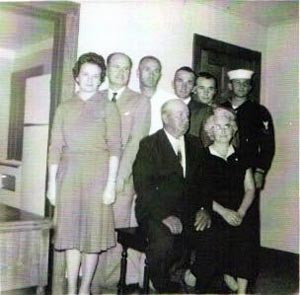 This photo was taken many years later when my youngest brother was home from the Navy.

Life for Mom was much easier when I was growing up, but she still grew and processed most of our food, and raised chickens for meat and eggs. Her sewing changed also, as she had a better machine and only sewed for herself and me. Can you imagine how exciting it must have been to sew for a little girl after all those shirts?! She was quite good at it too, knowing how to cut out and match zig zag and plaid patterns, and other special touches.

I’ll always remember her dresser drawer that she continually filled with fabric whenever there was spare money from the sale of cream and eggs. As a child, I loved to take out the material and study the colors and patterns. Then I became a teenager and clothes became more important to me. That drawer took on new meaning! Many a time, I would come home and tell Mom of a special occasion and the “need” for a new dress. We would go to the drawer, choose a fabric, and discuss a style. There were times when I didn’t give her much notice, and she would list all the jobs that I must do so she would have time to sew. I did my part, but I also remember listening to the rhythm of her sewing machine long after I went to bed. 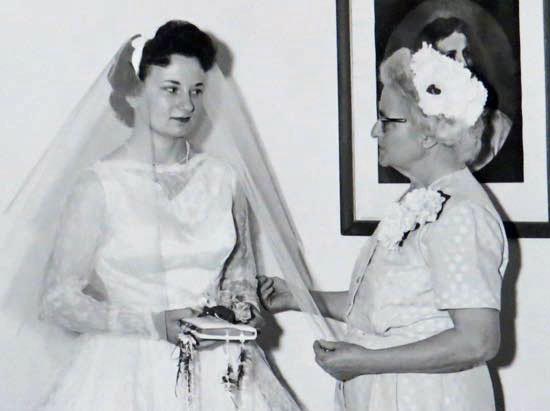 My mother made my clothes from layette to wedding gown. Larry and I married when we were 18, and Mom was 58.

I have several quilts Mom sewed, and many afghans and doilies crocheted over the years. She always had her handiwork by her chair to pick up whenever resting or watching TV. Her hands were never idle, and I can vividly see her sitting there. 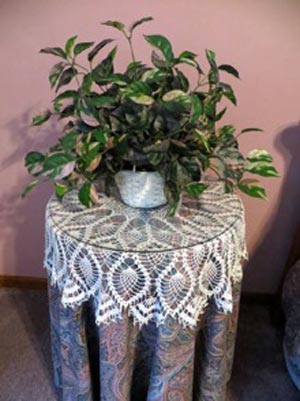 At left is an example of the many doilies Mom made. She also crocheted a tablecloth for all six of us when we married.

Some of us were able to be with my mother during her dying process. It was a blessing to witness, similar to watching a baby being born. We felt privileged to share the experience as a family. Then the night before her funeral, something unexpected happened to me. As I lay in bed, I realized that I didn’t want her to be put in the ground. Mom was born in 1901 and lived almost a century. She had walked this earth through so many changes and inventions. She had gone from horse and buggy, to the automobile, to watching a man land on the moon. Electricity and indoor plumbing had changed her life. There had been several wars, but also children, grandchildren, and great-grandchildren. How could she not be here anymore?

When we went back to our home, I taped some photos of Mom on the refrigerator. She had been old for so long, and I wanted to remember her as she was when I was growing up. She may have only completed the eighth grade, but she left me quite a heritage.

I am 73, now, and something unexpected is happening to me again. I often get glimpses of my mother – in the mirror. 🙂