The turkey is well-known for being wily and smart. Ben Franklin wanted to use it for our national bird but as we all know the bald eagle won out. While it’s not easy to bag a turkey, if you know a few things about them and their habits, you can have an easier go of it and perhaps even get one for your Thanksgiving table. Don’t wait until the last minute or you might be eating meatloaf from the freezer.

There are a couple types of turkey. The one I’m going to discuss is the best known. It is the common turkey (Meleagris gallopavo), which is a bird native to North America. As we all know the wild turkey has been widely domesticated for the table and barely resembles the wild turkey in color and weight.

Domestication of the common turkey was probably begun by the Indians of pre-Columbian Mexico. The birds were first taken to Spain about 1519, and from Spain they spread throughout Europe, reaching England in 1541. When the bird became popular in England, the name turkey-cock, formerly used for the guinea fowl of Islamic (or “Turkish”) lands, was transferred to it. English colonists then introduced European-bred strains of the turkey to eastern North America in the 17th century. Turkeys were mainly bred for their beautifully colored plumage until about 1935, after which the breeding emphasis changed to their meat qualities.

The common turkey found today in Mexico and in the southeastern and southwestern United States differ slightly in feather markings and in rump color, but all are basically dark, with iridescent bronze and green plumage. Adult males have a naked, heavily carunculated (bumpy) head that is normally bright red in color but turns to white overlaid with bright blue when the birds are excited. Other distinguishing features of the common turkey are a long red fleshy ornament (called a snood) that grows from the forehead over the bill; a fleshy wattle growing from the throat; a tuft of coarse, black, hair-like feathers (known as a beard) projecting from the breast; and more or less prominent leg spurs. The male turkey, or gobbler or tom, may be 50 inches long and weigh 22 pounds, though average weight is less. Female turkeys, or hens, generally weigh only half as much as the males and have less warty heads than do the males. (Taken from the Encyclopædia Britannica. Last Updated 3-25-2014) 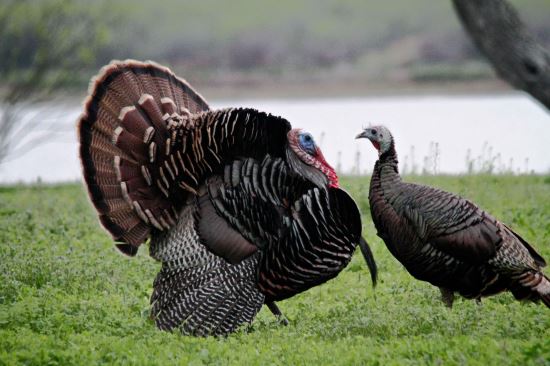 A big tom and a hen. Courtesy of US Fish and Game.

The wild turkey prefers woodlands near water. We have land that happens to be perfect for turkeys. We have oak savanna and brushy areas for roosting and cover, and a big creek that runs through the property although right now it is dry except for a couple large water holes in the creek bed. Turkeys eat seeds, insects, and an occasional frog or lizard. When alarmed it may run rapidly to cover, but it can fly strongly only for short distances (about a 1/4 mile).

My husband and I decided to take a long walk the other day to see what turkey sign we could find. We have a couple of young friends who have taken their gun safety courses and are all raring to go hunt turkey so we can have a real traditional Thanksgiving. Last year they weren’t successful in their hunt so this year we thought we’d help them out by scouting for turkey sign. As you will see we were very successful.

First, look for the geographical area turkeys like to congregate. Look for water and wooded areas with brush near water. Keep in mind turkeys – like chickens – roost at night so if you can find places where there are trees with horizontal branches, that’s good turkey habitat. So much the better if you can find bluffs by your water sources and wooded areas. Turkeys prefer to roost out of the wind and a bluff or hill will block the prevailing wind.

Oak grasslands below a creek bluff. See the hill in the background? That’s the bottom of the bluff. 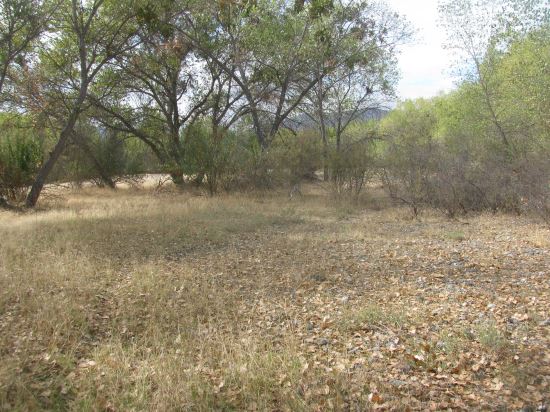 Brushy areas with trees near water are prime turkey habitat. 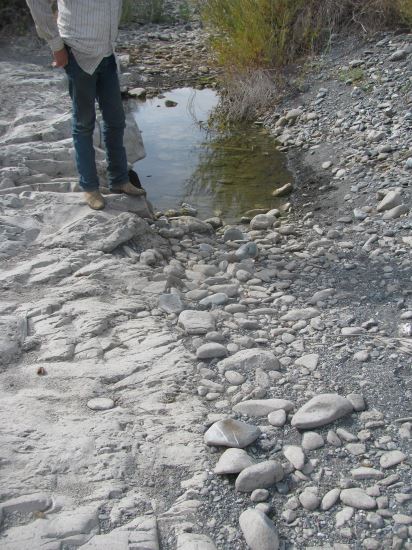 The all important water hole.

Then pick a day, maybe bring a lunch and some drinks, and have your turkey walk. Look for the geography that fits and then get your nose to the ground. Look for dust baths and areas where the turkeys – again, like chickens – scratch for worms and insects. You might get lucky and see feathers and poop. You might have to look hard. Go slow and look carefully. We’ve only had one problem. We’ve looked for turkey roosting trees with poop on the ground underneath, but we’ve never found any. If turkeys like to roost in sheltered spots you’d think you could locate a lot of poop underneath the favored tree. We haven’t been successful in finding any of this sign. If anyone can explain this I’d like to know what your opinion is. Maybe we just didn’t look hard enough in the right place. 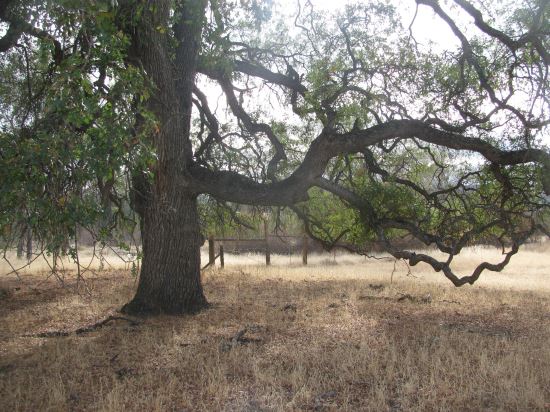 This should be a perfect turkey roosting tree.

I Spy! A feather by the left toe and fresh poop by the right.

This turkey feather is the same color as the background. 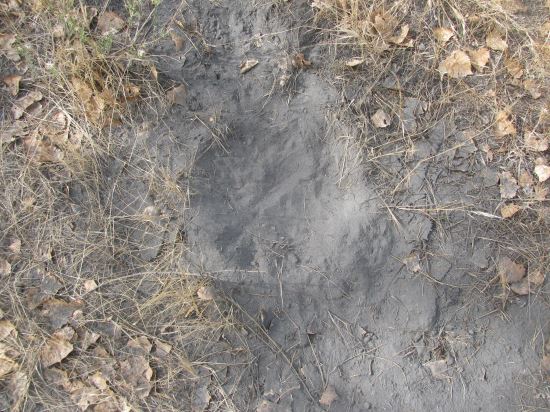 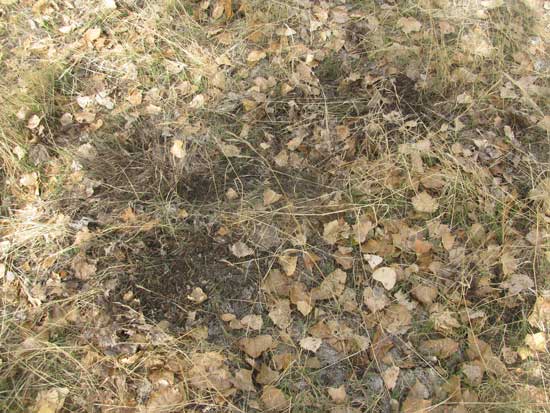 Turkey scratch sign in the leaves under a tree. 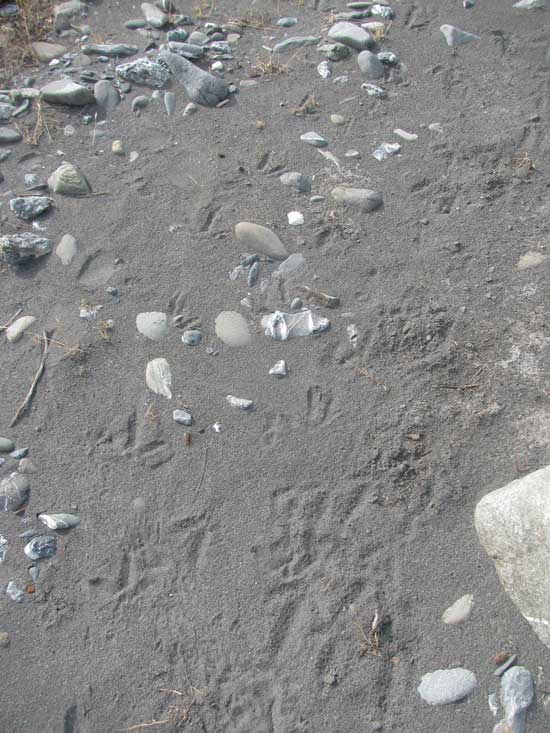 Turkey highway! Tracks in the sand near the water hole

Turkeys roam all over from early morning until early dusk. We got lucky and saw this. 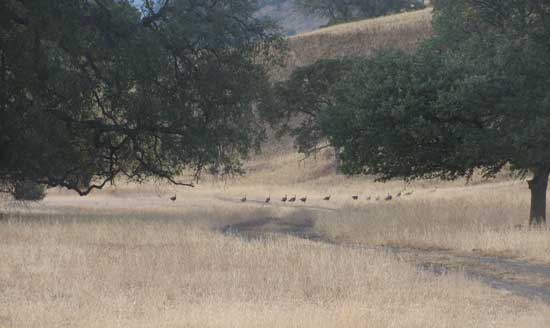 Turkeys fleeing across the meadow to the safety of the bluffs. 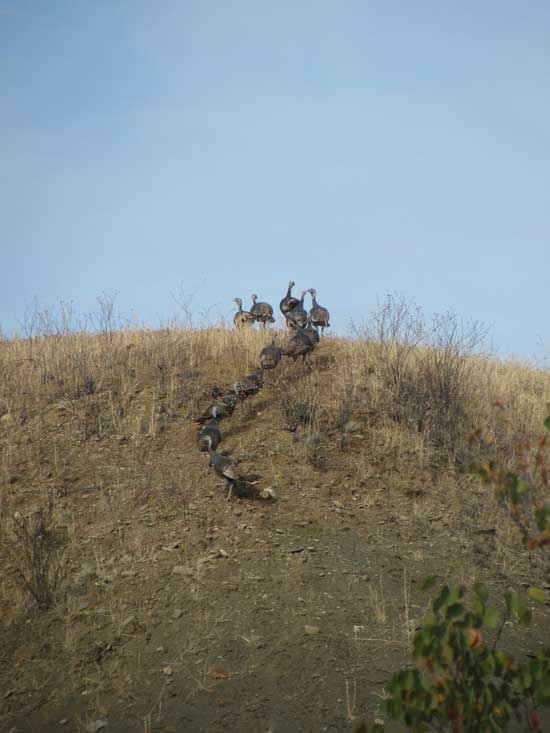 Up they go! Aren’t they a beautiful sight?

We scouted because just like in the olden days knowing your game’s habits and territory makes it all that much easier to get lucky when you go out on the hunt. This is important: Always practice gun safety and keep up with your target practice when you’re in between hunts. It’s best to go for a clean kill. It’s not easy taking a life but when you do it right and it goes on your table to feed your family, that’s a lot to be thankful for!