We’ve been on our new homestead for three months now and things have settled down pretty well to the point that I am now considering hosting a Traditional House Warming party. We’ll probably have a barbecue in our backyard and invite all the neighbors and all our old friends who have kept up with our peregrinations.

Along with the food, little gifts are also customary. The idea, of course, is that the new homeowners could probably use the items and if they already have them they might appreciate having new things that aren’t all worn out. They just spent a bundle on the down payment and insurance and most likely repairs so little gifts will be greatly appreciated. Something for the new house or something to be enjoyed during the party are customary.

In the olden days the housewarming party was symbolic but also literal. Of course, no one had central heating in those days and houses were warmed by wood fires in the fireplace or woodstove. Each guest would bring firewood as a gift so the new home owners would have plenty of wood to burn. There was no harm in the fact that they also believed that a warm house repelled evil spirits. It was important to have the house properly prepared for habitation.

Here’s another tradition that I’ve heard of. My cousin from North Carolina tells me of a Southern get-together known as a “Food Pounder”. At a Food Pounder guests bring the new homeowners a pound of food such as cheese, cornmeal, flour, sugar, or any other staple needed to stock the new home’s pantry. Nowadays even canned goods or fresh foods are proper.

Bread, salt and wine are traditional housewarming gifts. In the movie “It’s a Wonderful Life” we hear George and Mary Bailey speak these words when they first occupy their new house:

Now as soon as I’ve set the date I will let you all know and I look forward to seeing you! 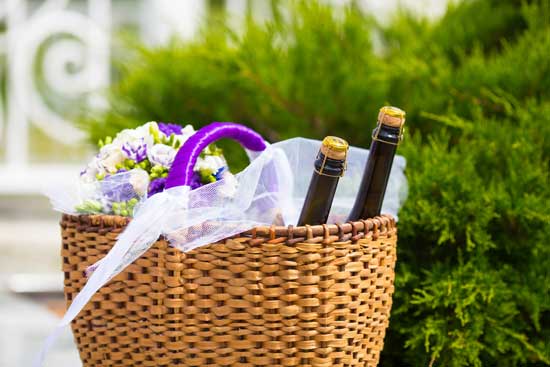