It will be two years this December that my husband was diagnosed with stage four CLL — chronic lymphocytic leukemia — a type of cancer in which the bone marrow makes too many lymphocytes (a type of white blood cell). His first symptom was obvious: a large swelling on the left side of his neck. His lymph nodes were trying to combat the chaos going on in his body. After a bone marrow biopsy and extended tests, he began aggressive daily chemo infusions at our local hospital.

When he returned for his second chemo treatment, blood tests revealed that the chemo was having no effect on his cancer. Infusion was stopped and his oncologist called The James Cancer Hospital, Columbus, Ohio.

Within a few weeks, we were seated in a new oncologist’s office reviewing my husband’s diagnosis and a plan to make him better. After several months of “chemo wash” — getting the first rounds of chemo out of his body — he began a new chemo infusion treatment at The James.

The oncologist and nurses at The James are amazing. No question unanswered, no problem too small. They have specialists for every type of cancer. There are 12 types of CLL alone — the same cancer, but with small differences. We learned a lot about CLL and the treatment of cancer.

The James’ facility where my husband takes treatment is new and state-of-the-art. The infusion rooms are designed to keep the patient and family comfortable during treatment. The rooms are clean and bright; rooms on the perimeter of the fifth floor look through large windows to the manicured courtyard below.

On the wall of every room is a single picture: a circle of colorful flowers, framed and matted in pure white. The art draws me in every time and takes my mind back to the flowers in the field. The artist meticulously placed each petal, leaf, flower, and bud, so that the colors draw you in and calm the storm you are feeling inside.

With the passing of summer, the flowers outside are waning, some turning into stick-me-tights, some already back to seed. Passing through the meadow, I decided to create my own circle of flowers. My choices were blooming “weeds” along the creek bank and resident wildflowers along the edge of the hay field. Gently pulling each flower from its stem, I placed them in my satchel and took them to the barn. I couldn’t find a white mat, so I used a bench. 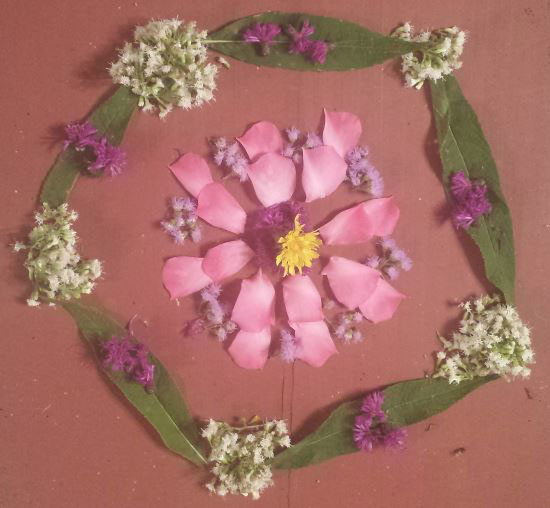 Even though my mind raced with things to do — cooking, cleaning, writing, work — I took the time to lay each petal down and place them neatly in a circle. I suppose the artist of the circle of flowers at The James used tweezers and tools to make their flower circle perfect. Mine is kind of out-of-round, a little serendipitous, but beautiful still.

Flowers fade and life has twists and turns. Enjoy the moment. I encourage you to make your own circle of flowers. Take the time to see the beauty in weeds that we take for granted. Feel the softness of each petal and soak in the beautiful hues. Winter is coming. 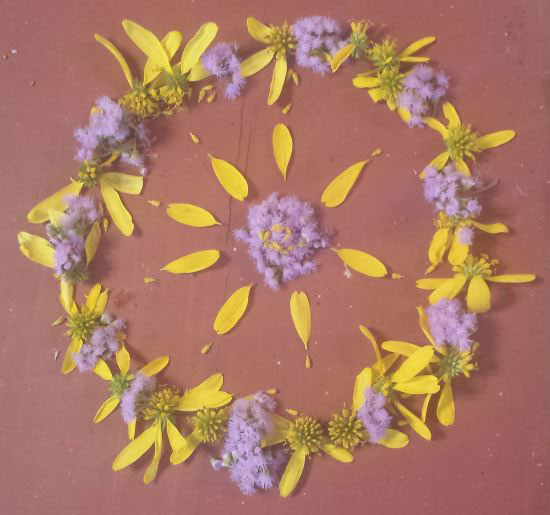