I was raised in the country in Iowa, but that was decades ago, so after living my adult years in a big city, I had no expectations of a social country life in rural Nebraska. Well, I did wonder if we would always be considered outsiders. We worked so hard on our weekend trips those first two years that we only had time to meet our closest neighbors. That has changed with retirement, and as we spend more time on our little farm, we have discovered that country people are the best. You may enjoy reading a popular post I wrote about some of these people awhile back called Country Roads and Country People. More recently, I wrote about the public library that we use in the neighboring town of Norton, Kansas, and how we met a dear friend there. Now I’m excited to tell you about a local movie theatre and how it is operated. It is another one of those stories that my husband, Larry, and I feel just blesses the heart. So, come along with us on our date night and experience the Crystal Theatre in Arapahoe, Nebraska! 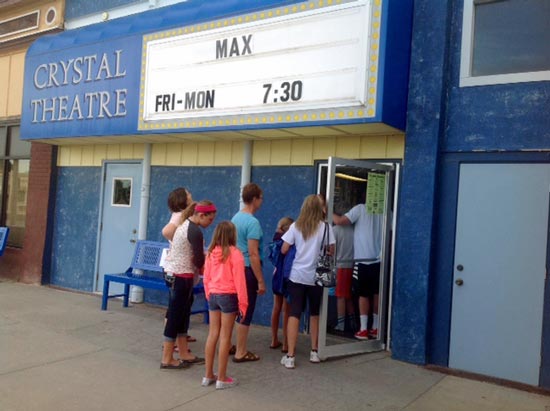 Yes, we are going to see the movie, “Max,” which is excellent. 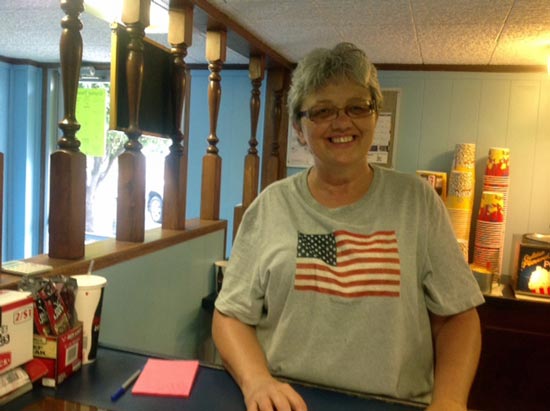 This photo gives a good perspective of the small area as we enter. You come in on the back left, pay for your ticket immediately inside the door while everyone else waits in line outside, go a few feet and turn the corner for concessions, or go a few more feet into the theatre. There is only one men’s and one women’s private bathroom. (Maybe you should just skip the pop!) I also chose this photo because I recognized this woman as Mary Upson, the real estate agent who showed us our little farm over six years ago! 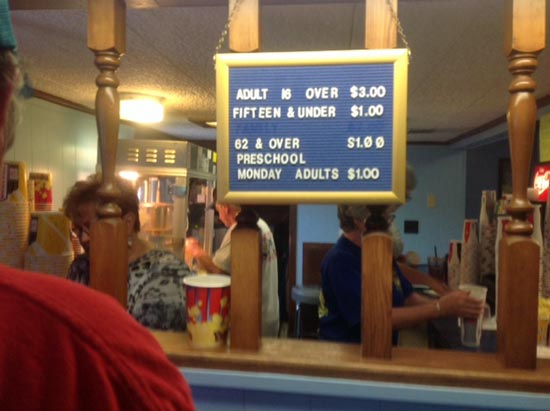 Now here is where the fun starts! Can you believe these prices? Larry and I can go to a movie any of the four nights for $1 each, children for $1, and anyone can go on Monday nights for $1. Hold on, it gets even better! 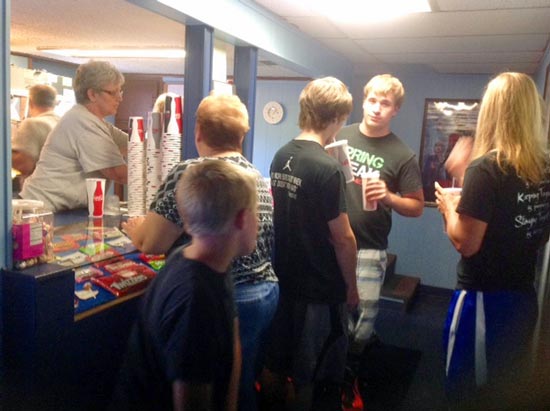 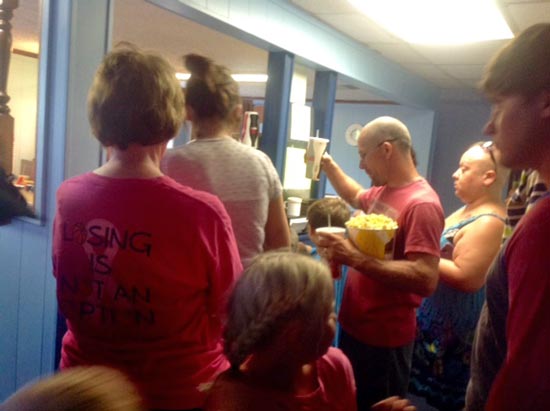 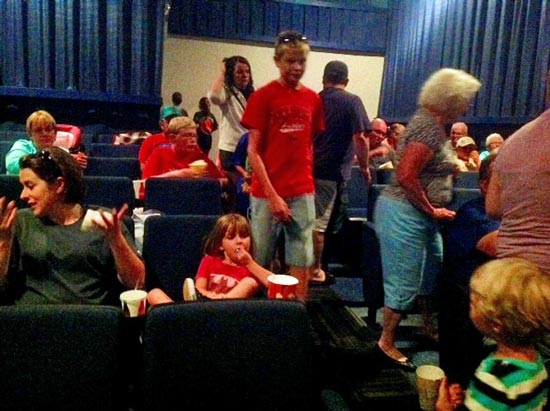 In fact, the whole place fills up quickly, so I found us seats while Larry purchased the snacks. 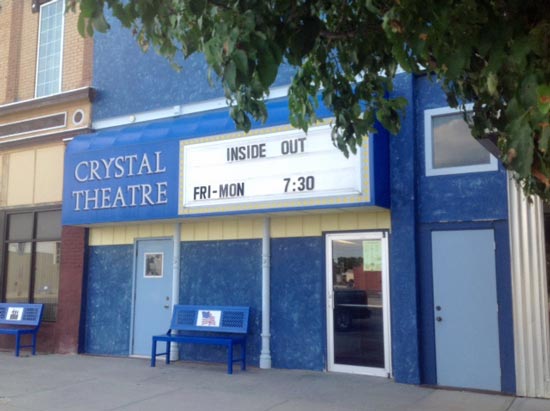 Yes, arrive early and grab a seat because this theatre often fills to capacity and people are turned away. It happened two of the four nights “Inside Out” was showing. However, you could join the people who stop in just to buy their excellent popcorn!

The Crystal Theatre speaks of a town that cares for its people and looks out for them. Arapahoe owns the building and pays for the electricity, but otherwise, it is run by volunteers. Hundreds of them over the years, and more than 70 at the present. Not only do the moviegoers come from neighboring Beaver City, Edison, Cambridge, Elwood, Indianola, Bartley, Wilsonville, Holbrook, etc, but some of the volunteers come from other places, as well. When I asked a couple of the women how long they had been volunteering, one said about five years. another said over 20 years. They were quick to tell me not to use their names as the theatre was run by many.

Don Sandell, a board member, said that if keeping the theatre going in Arapahoe over the years saved even one young person’s life from a car accident out on the roads, it was worth it. You can better understand his statement if you remember this is deer territory. He also mentioned the affordability for families.

I would like to share some of the theatre’s history that Don gave me. After it was used for a 1973 Junior/Senior Prom entertainment, the Arapahoe Youth Council asked the high school’s student council to help reopen the closed theatre. It happened, and from that beginning it has been operated by volunteers. Students helped again when the industrial arts class made it its project to paint, install paneling and remodel the ticket and concession area. Later, when the owner of a closed theatre in Red Cloud read an article about the Crystal Theater, he offered to sell all his used equipment. The theatre was in such need of improvement, they bought everything, including seats, for $2,000. These seats have been repainted and reupholstered over the years. Eventually, the theatre got an update when 180 new seats with cup holders came from a theater company in Omaha. It was a perfect time for volunteers to strip the theater, clean, paint, and install new flooring as well.

As the film industry changed, the sound system was updated to digital in 2009. Finally, using revenue earned from the sale of tickets and concessions, and many donations from individuals, businesses and even other communities, a new digital projector was installed in 2011 for approximately $90,000. Instead of reels, the movies now arrived on an external drive. The digital projector not only gave the viewer the newest in movie clarity, but allowed 3D movies.

In closing, I mentioned to Don that I had heard rumors of a possible new theatre being built to replace this one. I thought he might be against it since I had seen his photo in many of the newspaper clippings and knew that he had been a great part of the theatre over the years. I was wrong. He said, “Some of us are getting too old to run upstairs and down to the basement for supplies. We would like a supply room, an area to sell tickets, a larger area for concessions, more wheelchair and scooter access, larger bathrooms, and more seating.”

Don cringed a little when he said that they may need to increase admission prices. Immediately, a conversation with a woman I sat by the previous week came to mind. She said that many families couldn’t afford to go to the movies at regular prices. Including hers. I agree, and oh, the nostalgia of this old theatre! We love it and wish for it to always stay the same. With the right movie, it is a perfect setting for a date night. Thanks for tagging along, and I hope you had fun, too!

If you frequent the Crystal Theatre, are one of its volunteers, or have a similar theatre in your community, leave us a comment to enjoy. Don’t hesitate to voice your opinion, and be sure to click the share button to tell your friends about this unique hometown Nebraska story!