After deciding that my resolution for 2013 was for us to eat less processed foods, I went straight to Pinterest and started searching for meals that would qualify as organic. Along with the recipes I found, I also come across many pins pointing out the many faults of the processed foods that I was trying to get away from. After reading, “If you can’t say it, you shouldn’t eat it,” I was compelled to go to my kitchen cabinet and see if I could read some labels … pretty much everything had at least three items that I could not pronounce … so I did what most do when they don’t know something … I googled. What I found was disturbing to say the least. Here are just a few of the items that I found:

Titanium Dioxide is a component of the metallic element titanium commonly used in paints and sunscreens. The food industry adds it to hundreds of products to make overly processed items appear whiter. We found it in our salad dressing.

BHT (Butylated Hydroxytoluene) is a common additive used to prevent oxidation in a wide variety of foods and cosmetics and was listed by the National Toxicology Program (NTP) in 2005 as “reasonably anticipated to be a human carcinogen” on the basis of experimental findings in animals. It is also used in jet fuels, rubber petroleum products, transformer oil and embalming fluid. As if this were not enough, the Material Safety Data Sheet (MSDS) warns that BHT should not be allowed to enter the environment, as it can cause liver damage and is harmful to aquatic organisms. We found it in our cereal.

This last one that I’m gonna share, I stumbled upon while looking up the others.

Dimethylpolysiloxane is used to create Silly Putty, cosmetics, shampoos, heat-resistant tiles, caulking, industrial oil, and it can be used in the treatment of head lice. It’s also used in McDonald’s and Wendy’s french fries!! (Yeah, like we really need another reason not to eat at these places!) 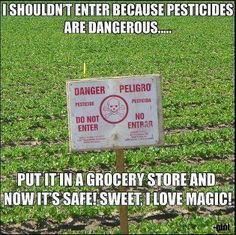 There were so many more, but rather then list them all, I’ll let you play detective in your own kitchen.

If all that wasn’t enough, seeing this on Facebook really brought it full circle!

After letting all that I learned sink in, I knew no matter how bad I wanted to, there would be no way I could produce everything we ate from home. But I also knew I couldn’t be the only one who felt like this so I decided to once again turn to Google and research different ways to live organically. Stay tuned!