On the ranch we have need from time to time for equipment or livestock. Sometimes a time-honored tradition, the auction, has been the right place to get what we need. People on homesteads, farms and ranches have been going to local auctions since what seems like the dawn of time. I remember my grandfather talking about an auction a long time ago where he found some valuable equipment for this farm.

So when we needed sheep to train our herding dog, we went to auction and bought four sheep that were perfect for the job. Recently, we needed an equipment trailer so we headed off to a Ritchie Brothers auction. (Ritchie Brothers is the Big Time, just so ya know.) That time we got skunked. We were outbid on the regular trailers and the only ones left had air brakes and we don’t have air brakes on our truck. Oh well. That’s auction for you. Sometimes you win and sometimes you lose.

A Brief History of Auctions

No one knows exactly when auctions first came into being. There is research that says wives in Babylonia were purchased through auction. I’m very happy those days are gone! Auction comes from the Latin word “augeo,” which means “I increase”. Auctions are not as common as haggling or setting a price, but sometimes they’re the place to go when you want a lot of choices. The most common type of auction today is the English auction, which means the bidding is “open ascending price.” There are other types where it’s the opposite but I’ve never seen them.

The “auction chant” is a personal style of the auctioneer. The only thing that all auctioneers do is they state the current bid and the bid they want to get next. They’ll say something like “one dollar bid, now two, now two, will ya gimme two?” and any variation of that. The slurring of words in between the bids keeps the momentum going. Listen carefully and you’ll hear the numbers.

For this article I’m going to talk about live auctions. There’s been a surge in online auctions and that’s OK if you really know the item you’re purchasing. For the average Joe, though, the live auction is the best way to go because you can see and touch the item you want. You’ll usually find the yard on the edge of town. Sometimes there’s a little cafe at the auction yard where you can get a bite of lunch. There used to be a cafe at the Petaluma, California, auction yard called Mike’s at the Yard (maybe it’s still there) and they had the best hamburgers for miles around. (But no French fries. Mike says, “They’re not good for you.”) No matter where the auction is held there’s always excitement in the air.

Just so you have a feel for what goes on, you might think about visiting an auction without bidding. That way you can get used to what happens, get familiar with where the livestock are kept or where the equipment is on display. Ritchie Brothers is a huge equipment auction. You can find any type of farm implement and many other things from small to gigantic. 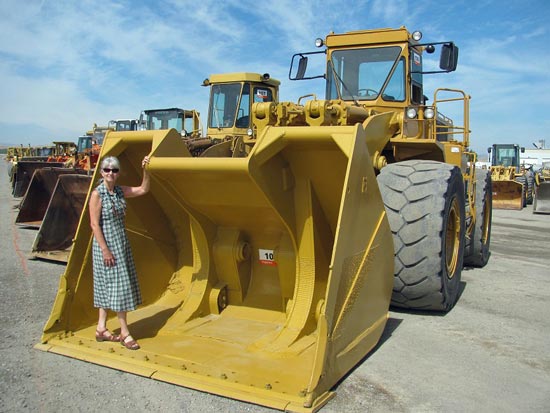 When we went to Ritchie Brothers it was a hot June day. They had shuttle buses from the parking lot and jitneys taking bidders from one end of the enormous yard to the other. They also had shade structures and free water. People came from all over to buy anything as simple as a ladder to heavy earth moving equipment. 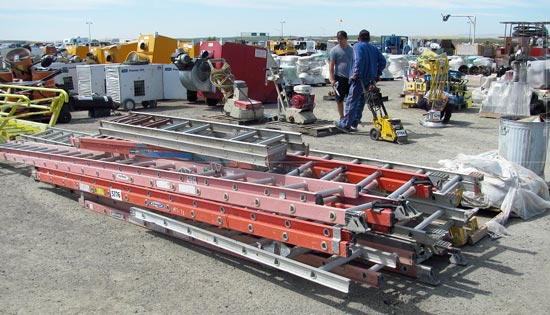 When you go to an auction you should figure out when your items are up for bid and then get there early. You want to inspect the items you’re interested in. If you don’t know that much about the item you want, think about asking an experienced person to go with you. Once you make a purchase it’s final and you can’t change your mind. Everything is sold “as is.” That being said, usually the yard certifies that the livestock is in good health and the equipment works.

The first thing you do when you arrive is register as a bidder. 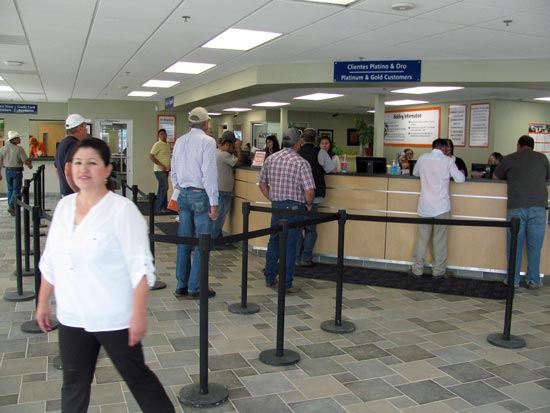 They’ll give you a number card and answer any questions you might have. Know before you bid how you’re expected to pay. Some places only take cash. Also you’ll need to know if they want you to take the items with you that very day. If it’s livestock, you should bring a suitable trailer. I once saw some guys putting a pig in the back seat of their sedan! I thought, “I hope you guys put a tarp down first!”

When the auction begins don’t be shy! If the auctioneer doesn’t see you, raise your hand higher. Go ahead and wave it. Usually, however, the auction has assistants (ring men) and they are keeping an eye out for the bidders so you don’t have to jump up and down. 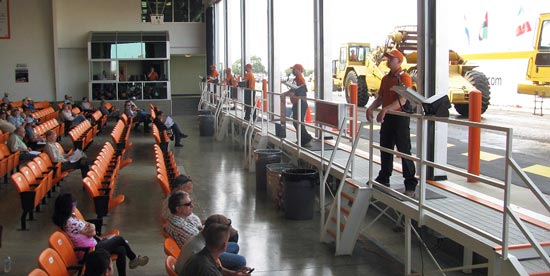 If at some point during the bidding you get cold feet or someone bids higher than you want to go you can quit and no one thinks ill of you. But once the gavels bangs and the auctioneer yells out “Sold!” it’s a done deal. Then you go pay for your item and take your booty home.

We’ve also sold animals at auction. We enjoy the opportunity to network with other sellers. Many sellers are involved in agriculture like us, so this gives us the chance to share information and find new resources within the agricultural community. It’s fun, too. I love having lunch at the auction even though it’s not gourmet food. We find that an auction is an entertaining way to spend an afternoon and get together with our friends and acquaintances to hear what’s going on down on the farm.

Absolute Auction: All items will be sold no matter what the bid. There are no reserve or minimum bids.

Auction with Reserve: Some or all of the items must meet a minimum bid before the auctioneer can sell it.

Choice: More than one item is offered at the same time. The bidder can take as many as they. If any items are left, the remaining go up for bid again.

All for One Money: Multiple items may be offered at once and the bidding price is for all items.

Here are some photographs of a few things we saw at Ritchie Brothers. 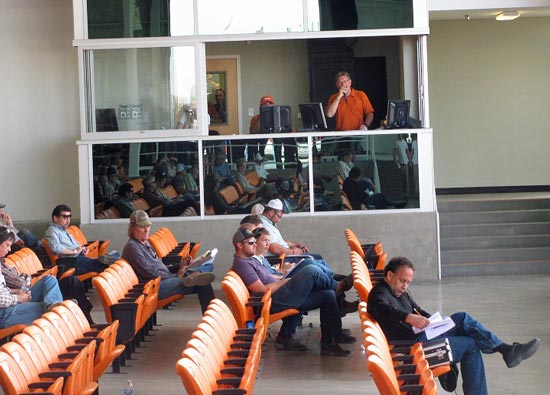 The auctioneer in his booth. Sold American!

More generators than you can shake a stick at.

Look at the cute Gator over there on the right with its dump bed. 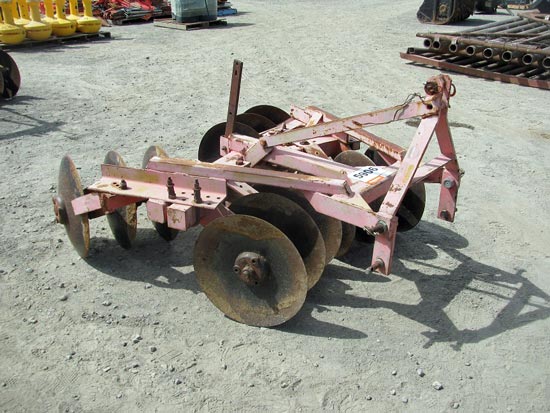 It looks like a pink disker but I bet it’s only sun bleached. 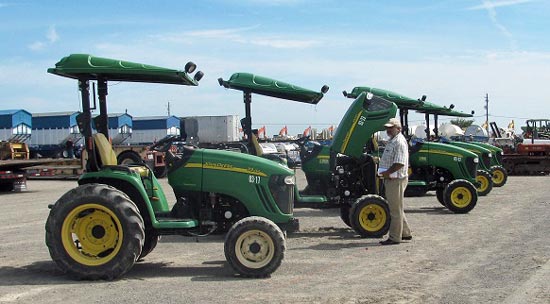 Nice trailers to go behind your SUV. 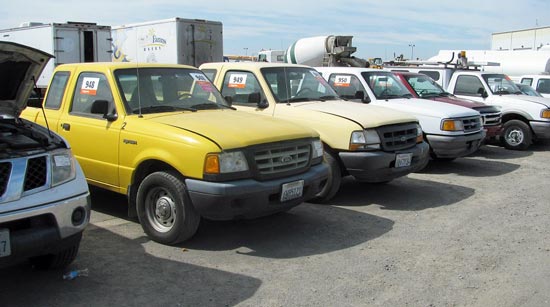 The hoods aren’t broken. They’re popped so you can have a look-see. 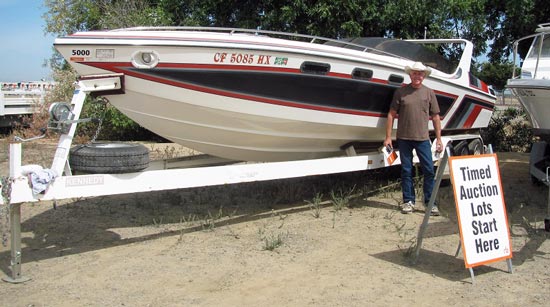