Human Nature or How to Look Trustworthy

Mark Twain said there is a great deal of human nature in people! I have a perfect example I want to share with you. It was a week before Christmas that year (before 9-11), and I was on a three-hour layover in Atlanta, on my way to Pensacola, Florida, where our son-in-law was stationed in the Air Force. It was a special trip because I was going to help with the arrival of a new grand baby. Leaving my coat at home in frigid Omaha, Nebraska, I eagerly looked forward to my first visit to sunny Florida during the winter. I purposely overdressed in my new Christmas attire so that my young grandchildren, Joshua and Katie, would see me come off the plane in a cheery red dress.

While exiting the first plane, a man in front of me complained, “You can’t even go to hell without stopping in Atlanta.” I, however, was almost thankful for the lengthy layover as I sat crocheting a pair of blue booties. I scolded myself once more for not making them before the rush of Christmas preparations. Now, if they would only turn off that annoying, repetitive message about not leaving luggage unattended or with a stranger, I would be able to concentrate on the pattern.

It was probably the red dress that first caught people’s attention, then they would see that I was a gray-haired grandmother crocheting booties, and smile at me. A little girl and her mother stopped and chatted. Then the mother asked me to watch their bags while they went to the restroom. As a woman, I understood how difficult it is to manage everything plus a child in one of those small stalls, but then another person observing us asked me to watch his, also. It became a job. All of a sudden, I was watching three people’s bags at the same time! All those black carryons began looking the same, and I was concerned that I might lose someone’s luggage! It became difficult to concentrate on my crocheting so I gave up and decided to continue after boarding the next plane.

I laughed to myself at how several people had ignored the constant warning on the intercom. I thought, if I ever need to look trustworthy, I’ll just wear a red dress and crochet booties! 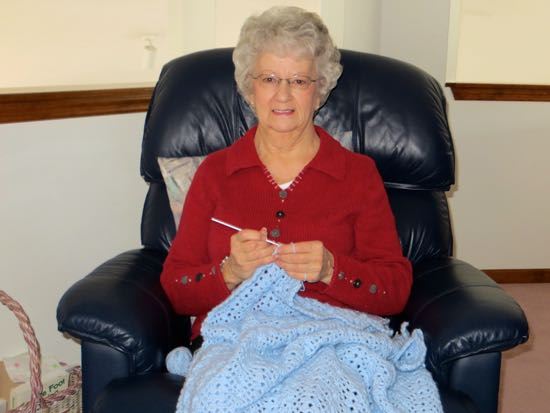 This is a more recent photo of this gray-haired grandmother crocheting! I have on red, and I’m crocheting a blue baby blanket. Do I look trustworthy?!

A local school’s effort to teach the children about local culture. 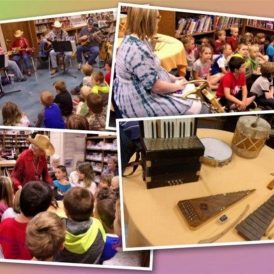