We don’t have much weather here at the ranch. Not what I would call weather anyway. It’s pretty much the same every day. In the summer, it’s clear and dry or partly cloudy with highs in the low 90s. In winter, it’s also clear with highs in the 50s. In winter, we will get rain, and it could be a lot and the creeks will begin to fill and flow. But we hardly ever have thunderstorms. When we do, maybe once or twice a year, they’re only all right. I mostly like them because it means a bit of much needed rain. But they’re nothing to write home about in terms of energy or power.

Storm watching in the Midwest is a whole different kettle of fish. When I was a kid in Iowa, we had Weather with a capital “W”! The old saying was “If you don’t like the weather, wait 5 minutes. It will change.” I loved watching the approaching thunderstorms, and I took it upon myself to learn what the different clouds meant or could produce. Tornadoes were a distinct possibility in any summer storm of a decent size. At the very least you could always count on wind, lightning and thunder, and maybe even some hail. It was Mother Nature at her most terrifying and awe inspiring. It made me feel little all the while electrifying my soul.

It might be daytime and we could see the storm coming, or it could be night and we couldn’t. At night, the tornado warning siren could go off, and we would be ushered into the basement. Doppler radar prediction systems weren’t developed until the 1970s. Before that it was simple observation and, I suppose, people getting on their telephones and telling the siren man to turn it on! There was some story that the TV would glow like a sword predicting Orcs if a tornado was near but no one wanted to test that information out.

We just hurried down there with our blankets and pillows to wait it out. It was recommended that we hunker down in the southwest corner of the basement because someone said tornadoes traveled from southwest to northeast. Everyone was full of information of unknown origin. Mom and Dad were hurriedly cracking the upstairs windows on the northeast side of the house before joining us. That was supposed to help equalize the pressure if the tornado passed close by so the house wouldn’t explode like a bomb. The pressure inside the house was going to be less than the pressure in the tornado as it passed by.

Luckily our house never exploded and a large tornado never came close, but it was all very frightening in any case. The crack of the lightning and the simultaneous crash of the thunder hurt your ears, and it could be one right after the other. If the storm was farther away, Mom would instruct us to count 1, 2, 3 when we saw the flash and wait for the thunder to have an idea how close the storm was. It was supposed to be one mile for every count. I think this was something to distract us because the storm was obviously right over our heads.

Mom told us that tornadoes left us alone because Indian lore said to build the camp in the crotch of the “Y” juncture of two creeks or rivers. Our little town was fortunately built in such a place. I’ve never heard any scientific explanation for or against this notion but it seemed to work. Tornadoes were always around our little town but never right in it. 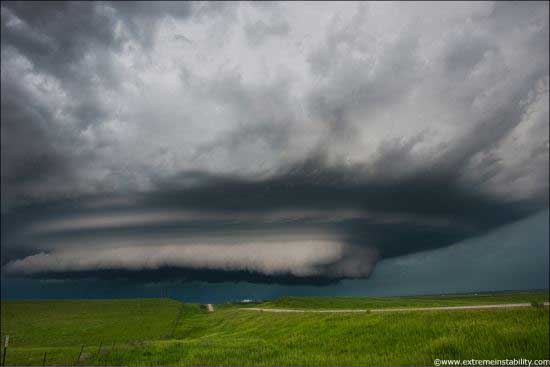 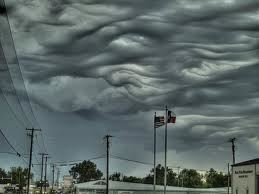 If it was daylight, we’d stand on the back porch and watch the storm approach. Many times it would be that ominous black and green “wall cloud” that just raises the hackles on your neck. All you Midwesterners know what I’m talking about. Mom said that tornadoes came out of these kinds of clouds the most, and without knowing anything more as a kid I couldn’t argue with that. They just looked mean. Like the gates of “the other place.” It wasn’t just a black cloud. It also had a greenish tinge to it that was really eerie. Just before the wall cloud gust front hit, the air would become deathly still. No birds or crickets could be heard. Just a leaden quiet for minutes and then it hit with a fury and the rain would be so hard you couldn’t see more than a few feet.

Sometimes there would just be turbulence in the clouds and no rain. I remember looking out our window once and seeing little tornadoes form and disappear. How could this not fascinate a person? How could this not spawn a life-long interest in weather and clouds of all types? Well, folks, it did in me and now I even go out and take pictures when we get “lennies” in the mountains to the west. I’m referring to lenticular formation, which is indicative of high winds aloft. 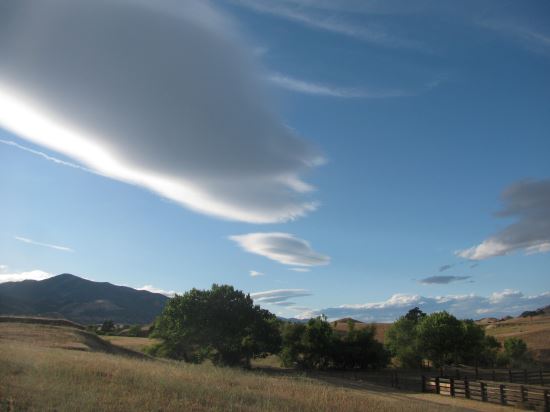 Those days are long gone now. But they still live on in me. If I ever go back “home” and a storm blows in, you know where you’ll find me. Living out my childhood memories on the back porch watching the storm.

You don’t have to go to college just to take a class. 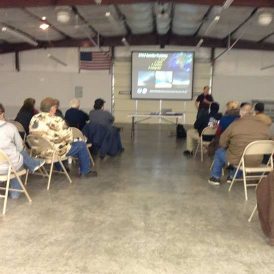