Memories of the Historic 6-On-6 Iowa Girls’ Basketball

My name is Mary Moore Conley. Recently, Deb Warth White read my post on How and Why You Should Write Your Memories. What caught her eye was my high school basketball photo, and she suggested I join the “I Played 6-on-6 Basketball in Iowa” Facebook page. So I did! She was also kind enough to share my post to that site.

Oh, my! As I scanned, I saw photographs of teams from way back even before my time (I graduated in 1960) and read some of the history of the unique game. On one of Deb’s entries, she mentioned two of her favorite things to watch is the movie, “Hoosiers,”and the Iowa Public Television video “Watch More Than a Game: 6-On-6 Basketball In Iowa.” I agree. We have that video, and I can almost see myself in much of it. Yes, I wore one of those very modest uniforms! As for the movie, my husband, Larry, and I can fully relate to the cracker box gymnasium in the story, as ours was even smaller. In fact, there is one scene our team experienced. We were about to go to a tournament held in a large gymnasium in Sioux City. Our coach took us there for a practice so we could get a feel for it. Then he used a tape measure to show us that the basket was the same distance from the free-throw line and same height from the floor as in our little gym where the two free throw circles overlapped the center circle! What he couldn’t do, though, was to give me the energy to run such a large court!

Also, as I scanned the Facebook page, I felt left out. I couldn’t identify with the many photos with trophies. Mostly LARGE trophies winning state. Wow! They don’t make them like that anymore! No, we never had a team that played at state, so Washta never had the chance to talk for years about the big game at Des Moines that shut down our little town for the day. However, there are so many wonderful memories in the hearts of us girls that should be mentioned, I think I may have to do just that!

Where to start is the problem. I’m thinking it will take more than one blog post because I want to recall several memories of those times. I’ve decided that I can only start from the beginning of my own story, knowing that much of it will also be the story of so many of the girls. I was not the star player on my team, but still, I can only tell my story.

It began in a school building that housed kindergarten through 12th grade. First, though, you’ll need to realize that back then, parents didn’t pay for their children to play on teams starting in grade school like at the present. So, I first started playing basketball in seventh grade on our little junior high team. 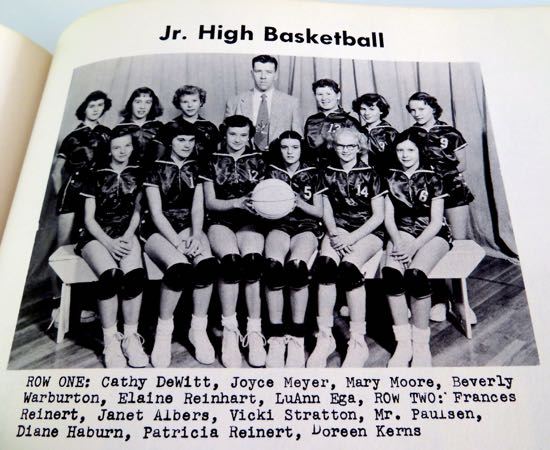 Junior High Basketball: I was in seventh grade.

Then came a big surprise. Actually, a shock. First two, and eventually five of us, were asked to stay after school to practice with the high school girls. You know that our school was desperately small in numbers for that to happen. My friend, Luanne, was better than I, and didn’t seem as scared to be with the older girls. I tried to fake it, but I was petrified. I realize, now, that the coach and superintendent watched us, thought we might have potential, and the sooner we started the better.

Before long, some of us were put in the games now and then to get experience. The regular bench warmers who eagerly waited for a turn were not too happy about that, and I can understand their disappointment. I didn’t win any popularity contest with them, but worked hard and did my best. I don’t remember exactly when we began playing quite regularly, but I do know we played high school BB for five years. 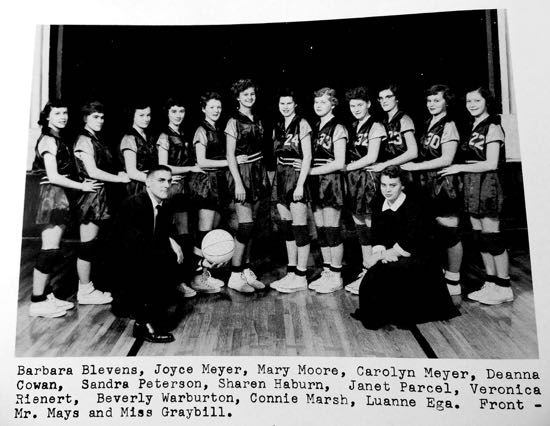 The high school basketball team. I was in eighth grade.

As I previously mentioned, I wasn’t the star player, so I’m now going to tell you my ONE personal highlight I found in my scrapbook today. Then my boasting will be over. It was a county tournament game, and the newspaper article not only verifies how young we were, but also caused me to remember that it was a turning point for my acceptance from some of the benchwarmers and older girls. Mostly, I know all you athletes will identify with the disappointment of playing your heart out and then losing. 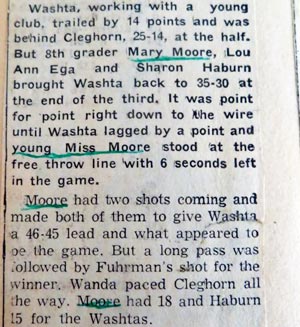 This is a clipping from the Cherokee Daily Times. We were eliminated in the first round of the annual Cherokee County Tournament.

Yes, I even underlined my name!

We had given it our all and come so close. After the game we dragged ourselves to the locker room. What a pathetic downcast mess we were. Then our chaperone told us not to shower quite yet as the coach wanted to talk to us. There certainly wasn’t much talking going on among us. No, we all just sat down on the floor along the walls and benches and shed a few tears, as girls do, and waited. And waited. Eventually, our coach and school superintendent came in. They were late because there had been quite a heated dispute. It seems the person “forgot” to start the clock as soon as he should have. It didn’t help that he was a fan of the other team. We’ll never know if he did it on purpose or just got caught up in the game. We lost just the same. We were told in detail that we played a great game, and I was personally complimented. One always remembers that.

It was on the bus ride home that a teammate, one of the bench warmers, sat by me and told me that she admired what I had done and that I deserved to be on the team. After that, I noticed that the others also had a better attitude towards me, and I felt accepted. Luanne certainly deserved her place on the team, far more than I.

A side note is that neither my or Larry’s parents attended our games. News of the game traveled back to Washta before our bus did, and my dad, who played cards in the pool hall while waiting for me, had already heard about the game when I arrived, and I could tell he was proud of me.

Now you know about a young Iowa girl who loved the game even though her team didn’t get far, let alone to state. Please join me again as I recall more highlights as well as the nitty gritty of playing small town 6-on-6 Iowa girls’ basketball.