“The Goat Farm” in Tracy

We’ve been on three places in the last 10 years. How did this happen you might ask? Well, it’s just the way it turned out.

First, we rented an acreage in Tracy, California. Then we worked as managers on a 1,000 acre cattle ranch in a remote part of Northern California. Finally, we bought our own acreage in the Central Valley of California.

Let’s go back to the beginning. Let me tell you about Tracy. When we came to Tracy we had looked around for a place to rent for quite a while. The day we saw it we knew it was what we wanted. Luckily, we were able to prevail with the landlord and sign the lease that very day.

It was known by the locals as “The Goat Farm.” This wasn’t just a backyard with goats. There had been hundreds of goats that had lived there. We never did find out what they did with all those goats but the most likely thing was they were raised for meat.

In any case, the effects of having so many goats was immediately apparent. The place was overrun by gigantic, lush weeds because of all that great fertilizer. In the middle of one large field we found the remnants of the goat shelters. There was also a big pile of concrete in the second large enclosure that was used by the goats as a “mountain.” Goats like to climb. 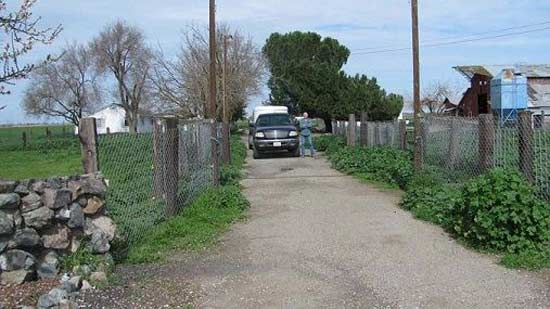 The hay barn is on the right next to the blue grain storage.

The old wood hay barn was missing so much roof tin that there may as well have not been any roof at all. Inside there was a bunch of old rusted equipment, discarded bagged feed and moldy hay. Near the barn we uncovered one giant concrete water trough that was full to the top with baling twine.

Someone had un-baled the hay and just threw the old twine into the trough. “There! Good enough for government work!” In between the barns and the pens someone had laid concrete but it was cracked and buckling everywhere.

A large storage shed also missed half of its roof. We guessed it had seen better days has a milking shed or something to that effect. It had been a pretty nice shed back in the day, but now the floor was half-covered with bird poop.

Starlings had used the holes in the walls to build nests. When you went in there you heard a chorus of peeping from the baby birds. Black widow spiders lurked in every corner.

The horse stalls were in the best shape of all the out buildings but there were no runs. It was just three stalls in the middle of decrepit concrete driveways. The run fencing was long gone. But all we needed was a water delivery system and removal of all the spider webs and those structures would work.

The previous renters had kept chickens which they just gave us when we moved in. There were 12 hens and a large rooster. One of the hens had bumble foot. One had only one foot and all of them were scrawny and infested with lice.

They were living in squalor, poor things. The pen was a literal pig sty. The floor was muddy and the roosts were covered with poop. Just to make everything complete the roof also leaked. 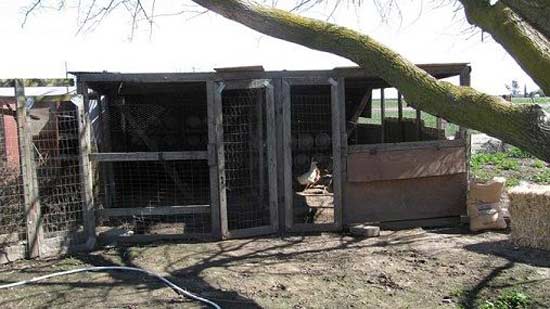 Diatomaceous earth and straw on the right waiting for coop rehab efforts.

That was the state of the out buildings.

Our house was in pretty good shape. The roof didn’t leak and the heat and air conditioning was functioning but there were no screens on the windows. Another problem was the walls were covered with dirt to about 3 feet high from the large dogs who lived inside with their owners. Mice droppings were everywhere. 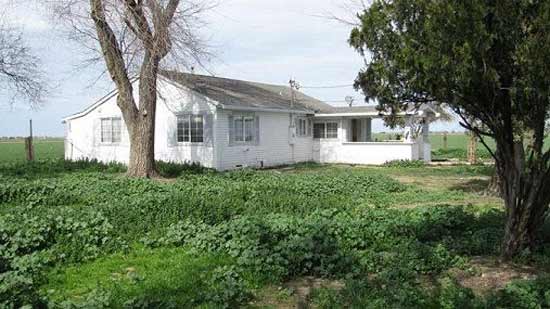 It was hard to figure out what to do first. But on a farm or ranch animals come first. Obviously, the chickens needed help right away.

We covered the roof in tarp until we could build a permanent solution. We cleaned out all the poop and spread a thick layer of straw over the mud.

On top of that we spread diatomaceous earth to start the process of getting rid of the vermin. Then we gave them a real watering solution as well as feed. I started giving them a bit of hamburger every day for protein and a little scratch for weight gain as well as their regular lay pellets.

The chickens went crazy with joy. It really made my heart sing to see them so happy. Because I spoiled them so badly, eventually I could let them free range and when I called them, “Here, chick, chick, chick!” they would come running from all over the yard. They loved me and I loved them back. The little one-footed hen was my best layer. 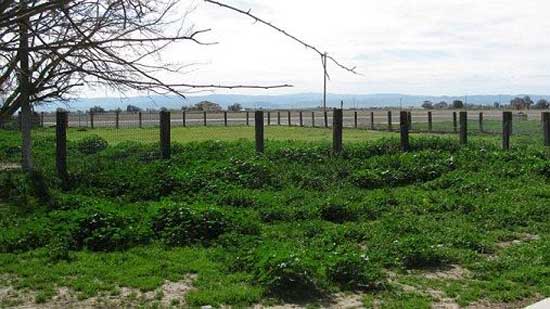 Then we had to mow to find enough space to keep our horses. The horse pasture was in not too bad of shape and it had the added advantage of being able to be irrigated. It turned out that we had the privilege of using the irrigation water from the alfalfa field across the way. So we let the horses out there and rented a large industrial size mower for the rest and set about taking the weeds down.

When we started mowing we found that there were the shelters in the weeds. We got the weeds taken down and were getting ready to disk when we discovered that there was a lot of metal in the form of rotten fencing materials and nails of every shape and size.

Marty had a metal detector so he swept while I picked. I wish I had a picture of all the metal we got out of that field. (P.S. the metal detector has turned out to be a really good investment. We have used it everywhere we’ve gone.)

We bought hog fencing and built an enclosure for the dogs. Our dogs are outside dogs and only come in when the weather is super bad. 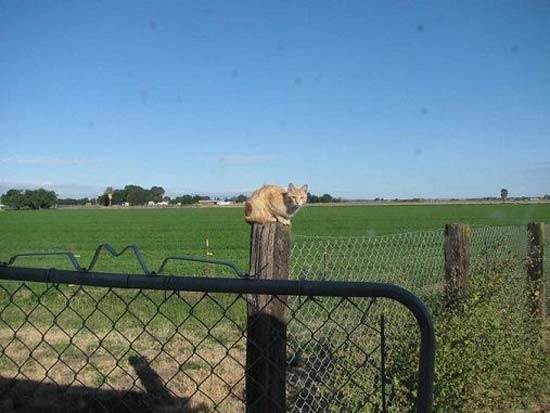 Charlie Cat on his perch.

At night after the animals were taken care of we started in on the house. First sweeping and then vacuuming to get rid of dog hair and dander. Then scrubbing the walls to get rid of the dirt.

Every morning we would wake up to mouse droppings all over the counters. That precipitated “The Look.” Every husband knows “The Look.” He knows he is in for it. The little woman has plans and he can’t wait to hear what they are.

In this instance the word is: “Exclusion!” A person can trap or poison rodents until the cows come home but mice have a tendency to reproduce like crazy so that method is a never ending battle. Even legions of cats can’t keep up! The only way to keep rodents out of the house permanently is to exclude them.

I tried steel wool stuffed in under cabinets but only went so far and then you have to go to the lumber yard and buy enough hardware cloth to go around the exterior of the house at foundation level. Expandable foam fills in what holes that is not easily covered with the metal mesh. Remember mice can get in holes the size of a dime or smaller.

The next project was then to — little by little — add window screens to all the windows. Did I tell you there’s nothing better than curtains blowing in the breeze? You can have that without window screens but then — in farm land — you also have house flies taking over. I give a big thumbs up to Marty who put in all the screens while I was commuting to my job in the Big City.

Other things we did: Finish off the tack barn. Start a straw bale garden to thwart the gophers. Re-roof the hay barn so we could store our hay in there. Add pipe corrals to the horse stalls so the horses could be there when sick or the weather was too bad.

This place turned out pretty nice. With all the fixes it really looked like home. 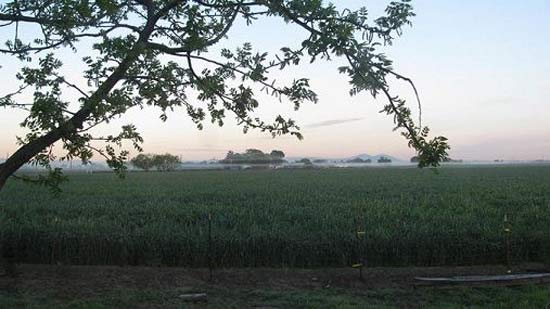 The view from my kitchen window in the morning.