My husband said, “Come here. Look at this. Don’t you think this would make a good story?” He was talking about his footwear. He’s finally gotten it that any and everything on this ranch is a potential subject for a story. I’ve often thought about writer’s block and it ain’t here, folks. Just swing, well, a dead anything, and you’ll hit a story in the making. That’s just how it is. There, I’ve said it.

So on this particular day the husband says, “Get out your camera. Take a picture. I bet you can think of things to say about my boots,” and I think, well, yes, the first thing I can think of is you have too many! Then he goes on to describe what they’re all for and in a minute I can clearly see why he needs them all. 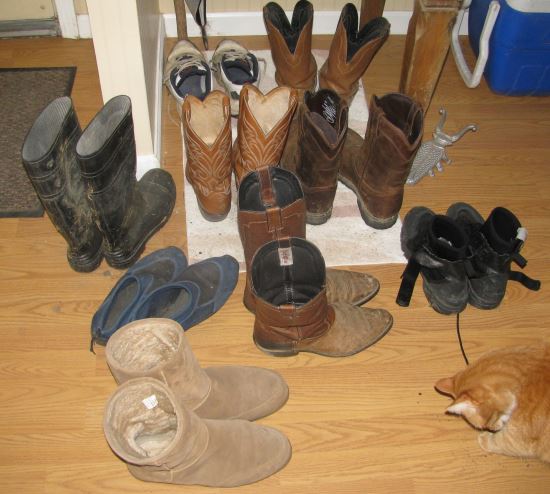 Going clockwise starting at the top:

My husband is Imelda Marcos in work boots. I bet Imelda could come up with an explanation for why she had all those shoes, too! I think of the day my grandmother explained to me how, when she was a girl, they had two pairs of shoes, period. One for working and one for church. They got a new pair when the old ones completely wore out and could no longer be repaired by the cobbler.