Tractors In My Backyard

“It ran better than that when I parked it there.” If you’ve been around someone who has left any type of truck or tractor sit in one spot for any length of time and then try to start it, you’ve probably heard that phrase before. In my case, it was my stepdad who let those words slip out of his mouth.

The tractor in question was the oldest in our collection built by IH. It’s a 1929 McCormick Deering 22-36. It had been sitting in the same spot for two years, obvious when you looked at its steel wheels, which had sunk into the ground. Every once in a while, David would give the crank a couple of turns, just to keep the engine from sticking. But on this day, he was determined to get it moved over closer to the Case. Imagine that, two years, same spot, never running. 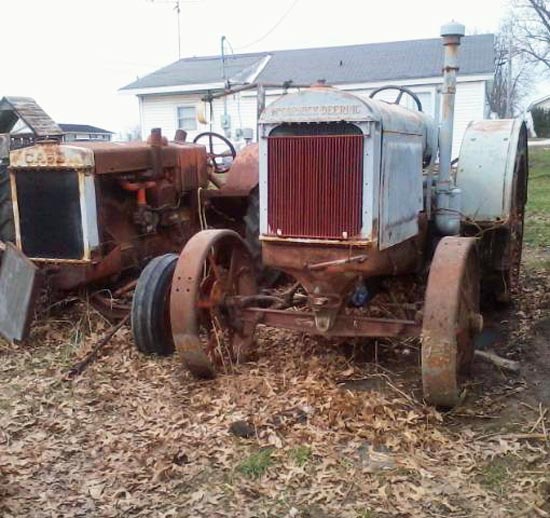 David ended up adjusting the valves in the head while the tractor was still running. That pretty much solved the problem. After 35 minutes of tinkering, the old tractor was running fine.

It has a huge radiator. On this day, the radiator seemed twice as big since we didn’t have a water hose to put water in it. That meant that I made several trips to the water nozzle by the house to fill a couple of 1-gallon jugs to fill the radiator. No need for me to go to the YMCA for a workout that day!

Finally, it was time to get her moving and get her parked closer to the 1936 Case Model L. The 22-36 isn’t a light tractor. Two years sitting in the same spot had sunk the lugs on the rear steel wheels and the front steel wheels had sunk into the ground at least an inch, if not a little more. Weeds had grown up around part of the tractor, some of which were taller than the tractor. One little tree sapling was trying to grow between the left rear fender and operators platform.

After clearing away the sapling and weeds, David spent several minutes driving the old gal forwards and backwards just a little bit each way to get it out of the ruts and tight little spot it was in. Before I knew it, he had the 22-36 sitting closer the the Case. I hope next time he doesn’t wait so long to do anything with it!

Next on the list is some work on the Farmall F-30 and getting our other tractors ready for the antique tractor shows that we go to. More on that later!