Wheels of My Own

Wheels of my own. The magic words for every young person. These days it usually means a car, if not a skate board. But in my day, bicycles were the big thing.

Even in the country, we all wanted to have a bicycle. All we had were dirt roads and cow trails through the field, but we were all wild to have those wheels, just like the city kids we all read about in books, or saw on T.V.

Daddy thought bicycles in the country was a silly idea. He was content to let me play on Old Jack the donkey if I wanted to go somewhere. But mother had been a city kid in California, she remembered having a bicycle and wanted me to have one too. 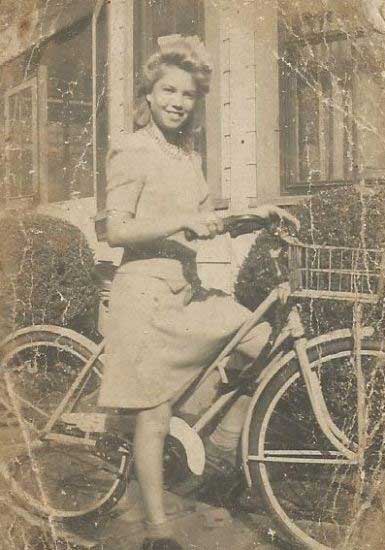 Mother at 12 years old on her bicycle.

My first bicycle was given to me for my 8th birthday. It came complete with training wheels — which didn’t work so well on grass and dirt roads. But I rode it anyway, ’round and ’round the house.

Being tall for my age and rather long-legged, I soon out grew my beloved bike. Since money was tight, I had to wait four years for the next bicycle. I got “Old Blue” for my 12th birthday and I still have him today, though he’s a bit rusted and worn. My daughter actually used my bike when she was little. One day soon, I hope to restore Old Blue to his former glory. 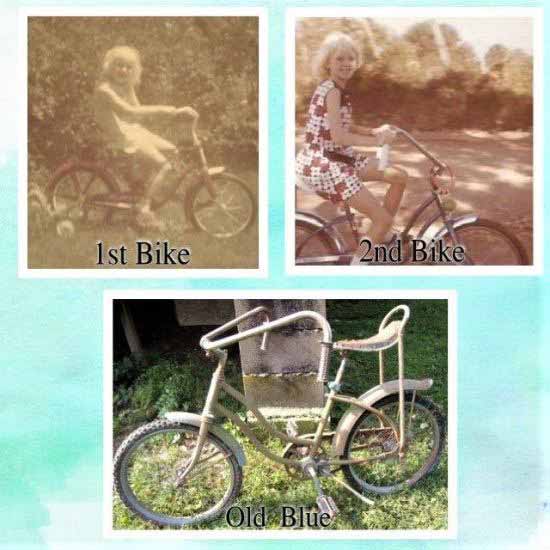 This bicycle did not come with training wheels, so I had to learn to ride the hard way. I took the bike to a side road and spent all afternoon, having wreck after wreck until I mastered keeping it upright and moving. I still have the scars on my knees.

I had such fun on that bicycle! We couldn’t afford a basket, so I wired an old dish drainer to the handle bars and carried things like books, a lunch and my cat, who actually enjoyed the rides. By now, I was big enough to really go places, and I rode for miles down the side road, stopping to say hi to relatives and neighbors along the way.

I wiped out a few times in the gravel going down small hills, but that was just part of the fun. And I learned very quickly I DID NOT want to go down the Bruno Hill on my bike. Too steep, too fast, and too easy to wipe out.

I took my bike to one of my best friend’s house and together with her little brother we traveled for miles down her dirt road, often winding up at the Bruno Store where we would buy a cold bottle of soda and rest before going back again.

I also rode my bike across our fields, following cow trails and into the woods, following the roads Daddy kept cut for the tractor. I put a lot of miles on that bicycle, and loved every minute of it.

Today, my granddaughter Kaydence carries on the family tradition. Her bicycle is also blue, and she rides all over the field following sheep trails and the tractor road down to the woods. Unfortunately, it is no longer safe for her to ride for miles alone on the highway, but there are biking trails at the town parks and she often goes there with the family. 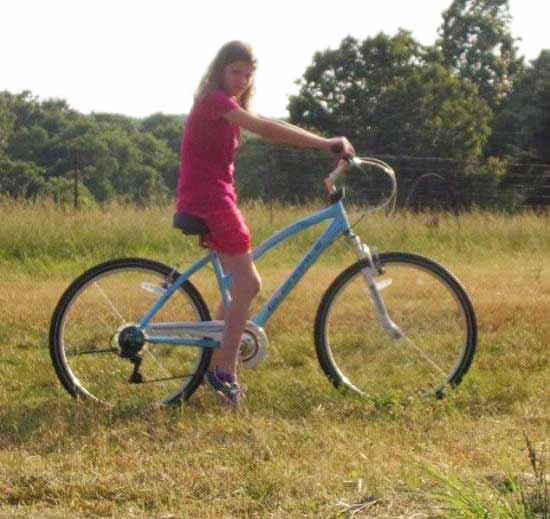 Roads change, civilization changes, but the need for ‘wheels of our own’ is always there in one form or another. Even for country kids. 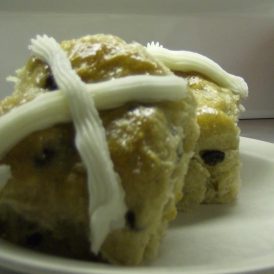