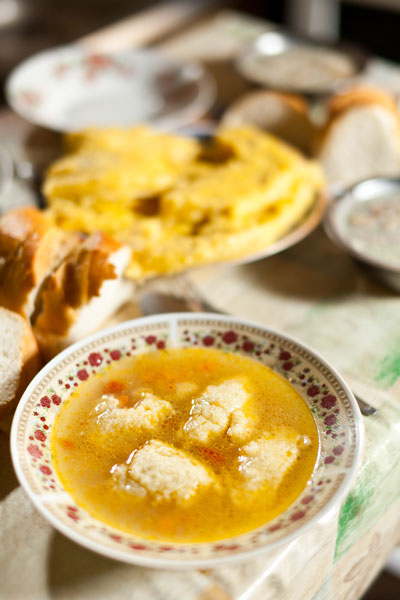 Photo by Fotolia/xalanx
Nothing could be more soothing - and frugal - than homemade dumplings.

In 1941, near the end of the depression era, we moved into a drafty old farmhouse that was really uncomfortable in the wintertime. Our potatoes froze behind the heating stove, and there was ice in the fishbowl. The wood heater had a flat top. I had to use it for a cookstove. My husband’s hours were irregular, so I had to use frugal recipes that would stay hot and still be palatable. One of my favorites was Beef Stew with Cornmeal Dumplings: bread, meat and vegetables all in one pot.

My husband had a sweet tooth, and since I couldn’t bake cakes and pies, Dessert Dumplings with Caramel Sauce was one of his favorites. Parsley Potato Dumplings were good with soup and also made a hearty meal.

During the winter months the hens didn’t lay and we were without eggs. Therefore, we were always on the lookout for “eggless” recipes. It was unheard of for farmers to buy eggs! We found that many of the recipes were acceptable without eggs. We hadn’t heard of cholesterol or that there was danger of salmonella in raw eggs. Most of the old recipes called for lard, cream and butter and we were unaware that they were “hazardous to our health!”

During the depression, we didn’t buy anything that could be made at home! I had a notebook that I copied frugal recipes in, and it contains a lot of information, how to make Shampoo, Varnish Remover, Wallpaper Paste, Library Paste, a Cinder Plant and even remedies for Calf Scours and Ear Canker! Many of the old recipes called for sorghum and honey, especially during the time of sugar rationing. We also made use of wild game and fish.

Mix vinegar, sugar, cornstarch and egg yolks until smooth, stir into boiling water. Stir constantly until it thickens. Pour into baked pie shell. Cool and top with meringue made with the 2 egg whites.

Sift dry ingredients together into a bowl; work in lard with fork. Combine well-beaten egg and buttermilk. Add to dry ingredients mixing only enough to moisten flour. Do not mix until smooth. Drop by teaspoonfuls into gently boiling pot, broth, soup, or on top of turnip, mustard or collard greens. Cover, cook 20 minutes. Serve at once.

Flake a bar of castile soap. Melt soap in one pint of boiling water, then cool. Put soap mixture into mixing bowl, and add one egg. Beat with rotary egg beater; put in jar. After it settles, it is ready to use. This shampoo will keep indefinitely.