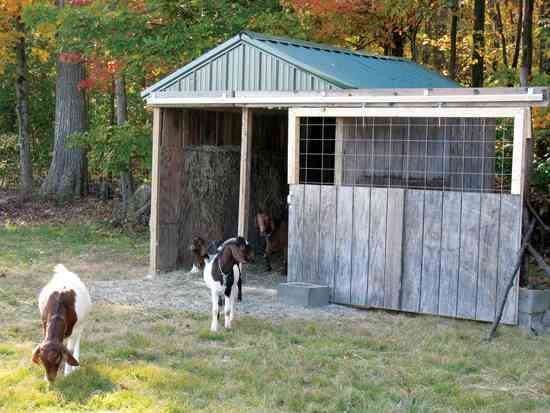 Photo by Heather Colwell
Goats enjoy their new barn made with recycled materials, including wood pallets and old lumber.

Building a Barn Out of Wood Pallets

For several years, my husband had talked about buying a few meat goats to build into a herd. Finally, after much research, we decided to do it. So, we built a fence, then started shopping for goats. We also began planning how to build a barn out of wood pallets, as we didn’t have a lot of time or money to put into what we thought would be a temporary home for our new goats, because we planned to build a bigger, permanent barn later.

In September 2011, we looked at numerous herds of goats, and eventually purchased a buck and four does. Now we really had to get that barn started! We decided to use as much recycled building materials as we could get our hands on. We started with 16 wood pallets we got for free from our local hardware store, along with some 2-by-4s we had left from building our garage a few years earlier. We used the 2-by-4s to fasten the pallets together to make three walls for our barn, using four pallets on the back wall, two tiers of two, and six pallets on the side walls, two tiers of three. We also used old wood siding from a relative’s house that was being torn down, and we constructed the roof with waste pieces of metal roofing left from our house roof. We did have to purchase a few 2-by-4s to build a sliding door frame and the rafters for the roof. We also had to purchase a track for the sliding door.

Once the barn was built, we bought a grain trough, and we hung two hay feeders my mother-in-law had and was no longer using.

This barn worked great as a place for our starter herd to eat and to get out of the weather. However, as our herd began to expand, we needed to expand their accommodations. When the first two does kidded, we partitioned off two pens in the back of the little barn, and everyone else stayed in the front. We had two more does that were still going to kid, but luckily they didn’t kid at the same time, so we were able to rotate the girls and their babies out of the pens. This system was not going to work forever, though, so we began building a bigger pallet barn, which is 28 feet by 20 feet. Now, the little barn has three kidding pens that get used in the spring, and the big barn has lots of loafing room for older kids and moms.