How a Beagle Helps a Human 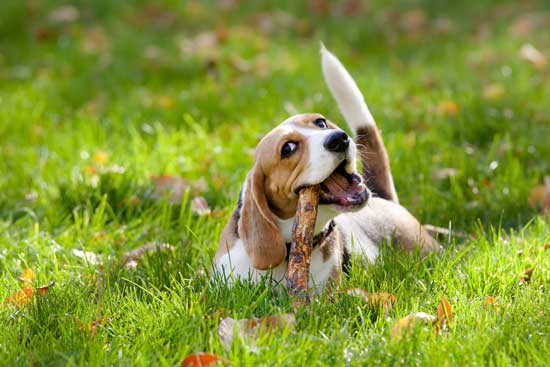 Photo by Fotolia/Beznika
A beagle helps bring life into the home.

Sun-warmed wood on my hands is rough and weather worn. My dog’s deep brown eyes dart back and forth between the forest and the hiking trail. There is a stream that winds along the path’s sides. The swirls of green water sweep tired black branches, once jutting inward from the bank, into their strong current magnified by melting snow. The trees stand like soldiers – their dark bodies aloof, wet with rain, and straight even against the gentle breeze the pushes the smell of pine sap and new flowers towards our nostrils. Winter is over; a new chapter begins from its tragic, played out curtain call. It’s the first day of spring – the gravity and pull of snow has littered the area with small twigs, branches, and the leftover clutter of fallen leaves. I listen intently to their crisp crunch under my heavy feet. The beagle plows ahead of me, pulling the blue leash.

Mostly black and brown, but he has speckles of white that dot his front like small wild flowers. His pot-belly sags; he is well-fed and he is happy. He pulls me endlessly towards some great beginning; one beyond the hike’s end where stream meets path. Beyond the smallest bridge I’ve ever seen, where he now drinks in long gulps missing the sand at the bottom. Sighing, almost out of breath, I turn my water bottle towards heaven and drink deep. Then, I watch his nose nudge green stalks of flowers growing upright, while his bark chases after bikes rolling across the bridge. The tires echo like heavy thunder.

I spent that morning shaking sadness, a dog in from the storm. Yet, when I watch my own dog shake away rain and snow, it splatters the floors and walls. I try to do it more carefully. I believe that if I can care for him, I can care for myself. Recently diagnosed with a mental disorder, I am a stranger. “You’ll have to be on medication for the rest of your life,” they told me. When I was in the hospital, I barely recognized anybody. But, when I came home, he greeted me as an old friend. He knows me better than anyone, and I swear he is always smiling. I heard that dogs can’t smile. How foolish that seems.

We’re both tired, but he got me out of the house today. Every day I feel better. While we were walking, people admired him. We’d talk briefly. And it was good the conversation was about Taylor. He likes the attention. I now hear the wind outside shake the windows and check myself for a fever. Slowly, the bird’s songs are muffled by approaching night, and the moon, puckered against wrinkled sky, rises like a hazy, midnight yawn. My system feels like hot electrical circuits, and I wake mid-night catching fire – smoke and terror in my lungs, at a point where sleep is exhaust.

When dawn finally arrived, it was rich. I could breathe again. The living room smelled like pipe tobacco. There was a pan of water on the wood burner to add some moisture. The dryness of winter still lingered in the musty air. I put a spoon in the water, tasted quickly – it tasted like reality here, thin with the metallic taste of medicine. But the dog’s grunt broke the mood, and then silence exhaled softly. Morning shone again through his sleepy, golden eyes. A creature to test your soul. The people around here leave them chained in yards. Large, ugly chains that probably feel like hands pressing your chest, sinking in, being dragged by the neck.

I shivered, held my stomach, pulled at a piece of leftover bread. I wondered if the horse at the farm where I bought Taylor was a mess too. Maybe from awakening insects, but I envisioned her with sunlight in her hair, pounding the ground, and moving slowly, eating wild grass.

“Good morning!” I said to the dog calmly. He blinked. I gave him the other half of the dog treat and some fresh water. Sitting down, I pulled a heavy brown blanket close. It warmly covered my body, and I all but disappeared. Lighting another cigarette, the drag filled my lungs with more smoke. It felt like large hands pressing down on my chest. I put it out. I pulled myself up this morning, but for how long? I can only guess. In the mail I expect more bills from the hospital. I won’t look at them until later tonight. But, if I can take care of this gentle creature, I can take care of myself.