My story starts in 1969 when our oldest son, Perry, had a seizure on his right side in first grade. This happens to children sometimes, nothing to worry about, and he was put on medication. He did so well that after two years, the doctor said he should be able to go medicine free after his next six-month checkup. Then it happened. The seizures resumed and continued with such frequency,- that he needed too much medicine to keep them in check. When I look at pictures of him during that time, with dazed eyes, it just makes me cry.

It is probably hard for you to imagine a time when Perry’s needed medical equipment, that we now take for granted but complain about the cost, was not available. I sometimes think about how different Perry’s life would be if they could have caught the tumor early, but of course, we can’t go back in time. Finally, we asked our doctor to call Mayo Clinic. I was in the hospital giving birth to our fourth child when we received notice that Perry was accepted, and he and his daddy drove there in early December.

Dye was again injected into Perry’s arteries, but this time the tumor had grown enough to move a large blood vessel out of place, and he was diagnosed. The tumor was removed, but there were still what we call “feelers or roots” left in his brain. Later, he would need around 30 cobalt treatments in hopes to destroy those.

I received the news of the surgery and soon left our month-old nursing baby and two other children at home and flew to be with them. If you have to go to Mayo Clinic, the month of December has its benefits. Although we had the heartbreak of the unknown prognosis, we continued on like zombies doing our Christmas shopping in between the 15-minutes-every-four-hours-visits, we were allowed in intensive care.

The Christmas spirit of the place was hard to ignore when beautiful Christmas music was playing, and the many decorations which included a donated elaborate gingerbread house. There were visits from celebrities bringing gifts, and a Christmas party put on by the staff that Perry was able to attend. I have a mental picture of a large room full of children in all kinds of conditions. Many arrived in wheelchairs or beds, and I saw the same myriad emotions that I felt in their parent’s faces. I don’t seem to have the words to fit the feelings of such a contrasting time, but as I said, it was the Christmas we remember the most. Oh, and we made it home in time to put up a tree and celebrate as a family! Such a time is also when we discovered what friends and neighbors are made of – good stuff.

The tumor and surgery left Perry with a weakened right side, so he walks with a slight limp and basically became left handed. Medication drags him down somewhat, but controls his right side seizures. Later in life, after years of riding his bicycle everywhere, he was allowed to drive. You can believe it was a big day when he bought his first car!

Perry is 51, now. We could write a book on his and our struggles and victories over the years, and he is a trooper. His prognosis was so iffy, such as the one I cried about (his hair might not grow back!) and the fact that he might be retarded after all the cobalt treatments. I’ll skip all the trials and just say he has hair and two master’s degrees. He teaches at Boy’s Town in Omaha Nebraska, mostly tutoring high school youth how to read, and is a wonderful uncle to nine, and a real encourager to many young people. 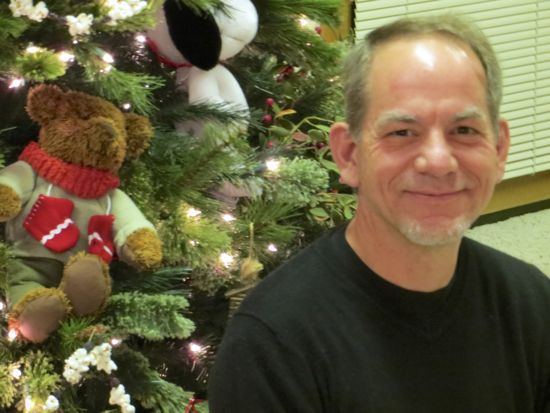 Perry, age 51. A real encourager to people, young and old.

We just had a wonderful family Christmas as we have grown to 18 members, but Larry and I will always remember the one at Mayo Clinic.