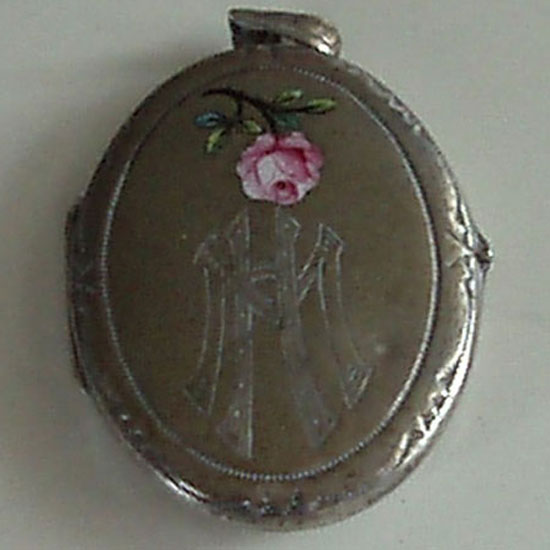 Every once in a while, when I go to my jewelry chest to get something out I want to wear, I reach way into the back and pull out a locket that is very dear to me. The locket is quite large and has my grandmother’s initials on the front. A small, pink, cloisonné rose above the initials is the only color on the locket. After rubbing it between my fingers for a few minutes, I usually put it back.

I received this locket from my grandmother – my mom’s mother – whom we called Lenchen Oma. Helene Müller had two daughters, four grandsons and two granddaughters, and she was good to all of us. She didn’t have much, but when we where younger, she never forgot our birthdays, and we all received a little something for Christmas. Later, she suffered from what is now called Alzheimer’s, although it didn’t have a name back then. She eventually became terribly forgetful and couldn’t even remember our names.

Lenchen Oma was short and round, as was my mother, and as am I. I can remember her only with snowy white hair. She always wore dresses and tied on kitchen aprons when cooking or doing housework.

I hated it that my grandmother lived so far away. It required a train trip of a little over half an hour with a layover of an hour to change trains. We had to walk a mile and a half to get to the train station at our end, while it was only a few blocks to catch the train on Lenchen Oma’s end.

We went for a visit during almost every school vacation. It worked out that way because my father was a teacher, so when he didn’t have to work, my sister and I didn’t have school. Mom didn’t work outside the house, except to tend her garden, so her schedule was pretty flexible.

Our main reason to take this trip so often was for Dad to help his parents, who lived in the same town as Lenchen Oma, with their small farm. I spent most of my time with Lenchen Oma, my aunt and my cousins, who all lived in the same house. I didn’t spend much time with my paternal grandparents because I was scared of my grandfather, and my grandmother was a stern woman who seldom smiled.

Lenchen Oma was a widow. I had never met my maternal grandfather because he died before I was born, but I was told that he was a great man.

One Christmas, Lenchen Oma must have really been short on money. She didn’t buy us any presents. I don’t remember what she gave the boys, but my sister received a beautiful rose pendant carved out of ivory, without a chain. I know my grandmother treasured it because it had been a gift to her from my grandfather. When I opened my gift, I discovered a locket, also without a chain.

Lenchen Oma died when I was only 13 years old, and I missed her every time we traveled to her hometown. Toward the end of her life, though, she didn’t know me at all.

It was a few years after I received the locket that I finally figured out how to open it. I fully expected to find Lenchen Oma’s picture inside as well as a picture of her husband, but I was sadly disappointed. There were no pictures at all. Then I realized that my beloved grandmother probably couldn’t afford to buy a camera, even when Grandpa was around, because he was always sickly and couldn’t work.

Although I have never worn the locket, I treasure it very much.