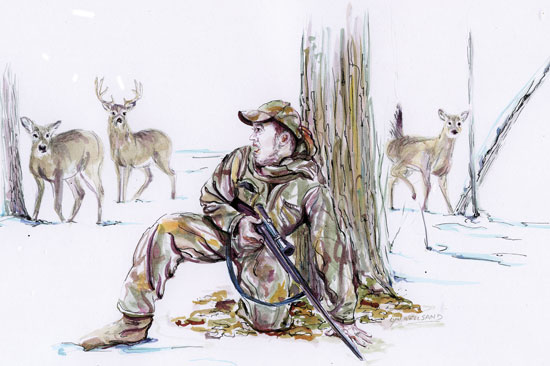 Illustration by Lyn Wellsand
An illustration of a deer hunter being surrounded by a trio of deer.

Although I have many fond memories of hunting deer in my home state of Michigan, I’d have to say the season of 1973 was the most extraordinary of them all.

I had gone to a get-together with other hunters from the area the night before opening day of deer season, and I didn’t get home until the very early morning hours. Thinking I probably wouldn’t be able to get myself up in time to go hunting, I decided not to go to bed, but to instead head on out to the woods.

It was snowing, so my plan was to head for a big cottonwood tree that sat on the bank of a large drainage ditch. When we were kids, my sister and I built a tree house there. Some years before, a storm had blown the tree over, but one of the walls of the tree house was still nailed to the tree. That, I decided, would shelter me from the snow.

When I got there, I was happy to find a nice dry bed of leaves under the wall of the old tree house. I ducked under the wall and found a place to sit, then situated myself into a comfortable position and prepared to wait for daylight.

Some time later, I opened my eyes to the bright rays of the sun beating down on me. I checked my watch; it was 9 a.m. — I had slept through the morning’s hunt! I stood and stretched, then leaned against the tree, unable to believe it. A moment later I heard movement behind me. To my surprise, I saw a doe. I grabbed my rifle, just as the doe walked out of sight.

I looked beyond the other side of the ditch, and in a small clearing stood a beautiful 8-point whitetail buck. I could barely breathe as excitement rushed over me. I raised the rifle to my shoulder and squeezed off a shot.

One of my favorite venison recipes is this one.

1. In large pot, place venison and water. Put pot on burner and cook at slow boil until meat is tender. Turn burner off and remove meat from pot. Cut meat into 1-inch cubes and return to pot of water; let stand.

2. In large mixing bowl, beat eggs well. Blend in salt. Add flour, little by little, mixing with fork or pastry blender. When dough gets stiff, finish mixing it with your hands as you would for bread dough.

3. On flat, floured surface, roll out dough into rectangle 4 or 5 inches wide and 1⁄8 inch (or less) thick. Starting with ends at longest length of rectangle, roll into cylinder. Cut into 1⁄4-inch-wide strips using scissors.

5. Unroll strips of noodles, knocking off excess flour, and place noodles in pot, one by one, stirring constantly while adding them so they don’t stick together.

6. Reduce heat and simmer, stirring occasionally, until noodles are soft but firm. Season with salt and pepper to taste. Serve hot.