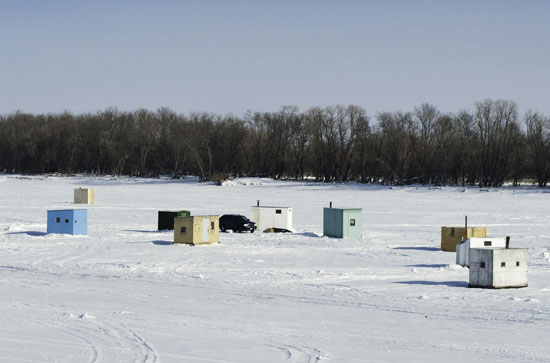 Photo by Fotolia/fang
Ice fishing is an adventurous way to enjoy the great outdoors in winter.

It was winter of 1954. My husband, Chuck, was to get his discharge papers after serving two years in the United States Army. He was stationed in warm, sunny Albuquerque, New Mexico, at Sandia Air Force Base. We lived off base, and I worked at Fogg’s jewelry store in downtown Albuquerque. Since employees got a discount on all jewelry purchases, I decided to buy something for Chuck as a commemorative celebration of his service in the Army. I decided on a Rolex wrist watch. Chuck was thrilled and wore it every day.

Chuck was most anxious to get home to Minneapolis, where he planned to resume his employment at the Grain Exchange, and he couldn’t wait to get out on Lake Minnetonka to do some fishing, ice fishing, that is.

Back in Minneapolis, settled in our apartment, we began life again as civilians.

The day was windy and cold, below freezing. The fish house, sometimes called ice shanty, was located near hundreds of similar looking structures. We entered the fish house and immediately started a charcoal heater. Chuck began to chop the ice that had formed at the holes used for fishing, when he realized he had not taken his wrist watch off. “I should have left it at home.” he lamented. “Here,” he said, as he handed me the Rolex watch, “wear it on your wrist while I finish chopping the ice in this water hole.”

Chuck baited my hook, and then I dropped a line into the water hole. I kept my mittens on to keep warm while I fished. The heater began warming the fish house, and I settled into my camp chair feeling comfortable and cozy. I sat there for some time without a bite, but when I felt a tug on my line I got excited. “I’ve got a nibble!”

Another few minutes went by. I felt a bigger tug this time. “There it is again!” I said.

“Don’t pull away,” Chuck instructed. “Give it some slack.”

I felt another big tug, but much stronger. I pulled off my mittens to get a firmer grip on the drop line, and much to my horror, I watched the beautiful Rolex watch fly off my wrist and plunge into the ice fishing hole into the deep, dark waters of Lake Minnetonka. The fish was gone, at least for now, but the watch was gone forever.

It all happened so fast, yet I can still see it, as if in slow motion, the whole incredible and unfortunate scene.