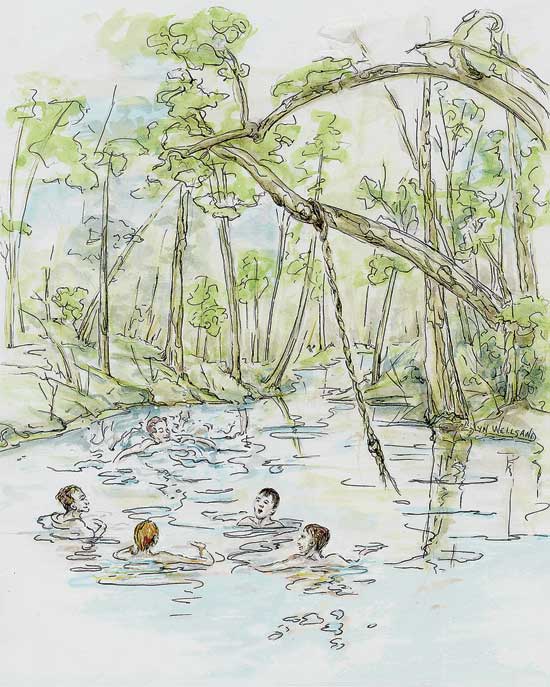 Illustration by Lyn Wellsand
A Lyn Wellsand illustration of five boys cooling off on a hot summer day in a local swimming hole equipped with a rope swing.

When my Grandmother Annie (Hays) Williams died, among her possessions was a letter, postmarked 1942, from a childhood friend. The letter relates to some of their favorite swimming areas when they were teenagers. I thought you might enjoy reading about the recollections in the letter.

My grandmother was born in 1902 and would have been around 15 when her friends hung out at the swimming holes in 1917 or 1918. The letter, which is sure to take you back to another time – a time in the life of a country kid — was signed by Edmond.

I’ve never figured out who Edmond was, but here’s what he wrote:

Today brings to mind the many fine old wash-holes that we used to inhabit every chance we got on a hot summer day. We were so anxious that we jumped the gun in mid-May, if not sooner.

Goin’ washin’ seems to be another old custom among country boys that is fast fading away. Shucks, the swimmin’ holes we had were a conglomeration of soft mud and sharp rocks or occasionally a sand bottom.

Thinking back, I guess the wash-hole at Roberts Mill Pond, about two miles from Eden (Alabama), was the best, but there were others. The one in Barber’s pasture, where several of the churches did their baptizing, was good, except when they ousted us. Another good place was in the flat woods, known as Slickum.

Now that placed called Slickum was really a spot. It got its name because the bank was made up of black dirt that
really slicked up when we dashed buckets of water over the bank. Our problem was to get the water up just as high as possible on the bank so we could…yeah, you guessed it…slide into the water. Usually we had an old leaking bucket of some kind, and with this we carried water up on the bank until it became so slick it was hard to walk on.

Then the fun began. We would start at the farthest possible point away from the creek, sliding on our rear ends most of the time, but occasionally we would use our belly for a skid-way. There were plenty of times that the dirt was worn down to an old hard-to-see root, and then someone would get snagged.

For many years the swimmin’ hole at Roberts Mill Pond was equipped with good spring boards and ropes. A platform was built in a handy tree hanging over the creek. The procedure was to hang the rope in the tree, climb up, grab the rope, and then swing out and over the water. We learned to do lots of tricks on that rope before dropping off into the cool water.

Best thing about the wash-hole was that there was absolutely no charge. The Hays boys usually kept the ropes and other equipment in order at Roberts Mill Pond, and Grannie Roberts, who owned the place, was their grandmother.

The more who had fun, the better it suited her grand, generous heart.

There was one thing that we did have to watch out about. The wash-hole was close to the railroad, and many times we wore less than nothing while swimming. We had to keep an ear and an eye out for trains, especially passenger trains. When the engine would start around the bend, there would be a grand rush to get in the water, which was about all the covering we had.

I’m remembering back then, but I’m sure the old wash-holes would not be popular today.

Grandmother Annie was one of the Hays children, and her grandparents, Grannie Roberts and Elijah Jones Roberts, owned Roberts Mill Pond.

Looking for more stories of fun around the swimming hole? Read Memories of Swimming Holes. 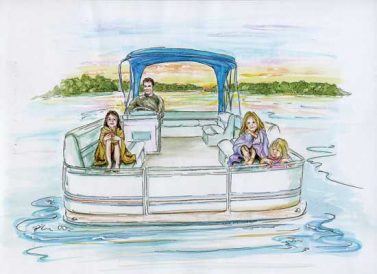