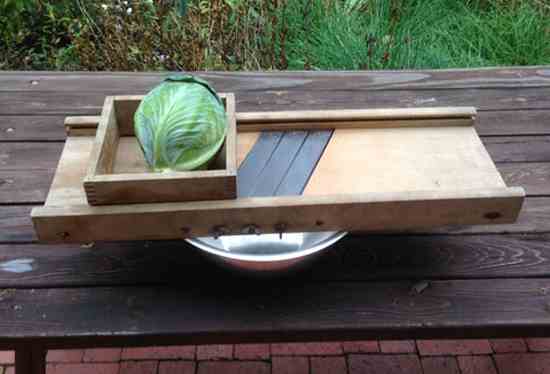 Photo By Renee-Lucie Benoit
Although still fully functional, family decides to retire this kraut cutter to preserve it for future generations.

It’s lovely how the most utilitarian objects can take us by the heart. They assume significance much greater than their originally intended use. A humble vegetable slicer, or to be more precise, a kraut cutter, is such an object for my family. When my stepmother passed away, it became imperative that we find it amongst all the clutter and kitchen gadgets. When we found it, it was a day of joy and celebration. Isn’t that curious? That kraut cutter isn’t just a kraut cutter. It is a symbol of the past, of the joys and love we experienced. It was like we had found a long lost member of the family – almost as though we were connecting with our great-great-grandfather, the original owner of the kraut cutter.

I come from a long line of German farmers. They were good at what they did. They were prosperous and talented, and I wish I could go back in time and meet every single one. They could make anything, grow anything and fix anything. They were a hands-on bunch. They had to be. For the most part, they didn’t have labor-saving mechanized devices. They certainly didn’t have everything connected to a gasoline engine. What they had was their skill, care and devotion to doing a job right. The kraut cutter was a device, but it was run by hand power not gasoline or electricity. You needed to have a special touch to make the shreds of cabbage come out just right.

My grandmother was particularly adept at this, as well as making any food you could think of. For example, she was so good at making angel food cake from scratch that she had a little home-based business making and selling them from her kitchen to all the residents from far and wide. She could make grape juice and can all sorts of meats and vegetables. Her larder was always packed. My dad would drive straight through the night for an early morning ham sandwich from a ham she had cured. But everyone loved it when she said she was making sauerkraut and corn relish. In her day, kraut was a tonic and a source of vitamin C. In the winter, the family would take spoonfuls of the homemade kraut to ward off a cold and flu. Eating so much fermented cabbage this way earned Germans the nickname “Kraut.”

Along with the kraut cutter came a family saying: “Immer etwas” – German for “always something.” We all said it. We said it whenever life presented us with something unforeseen. I guess it was a way of reminding us that we must expect that we were not going to be let off the hook by life and that to be prepared was the best way of dealing with whatever came up.

Now that the kraut cutter is back in the fold, although it’s still quite functional, we feel that it shouldn’t be used. It’s been in the family for so long. Every time I see it or lay my hand on it and feel the smooth texture from the many years of service it gave, I’m linked to all those wonderful people in that long line of German farmers. It’s a tangible link to the past, and the link is so strong that I can almost hear my grandmother sigh and say, “Immer etwas!” And I can also picture her shredding the cabbage for her famous kraut. It’s a good feeling.