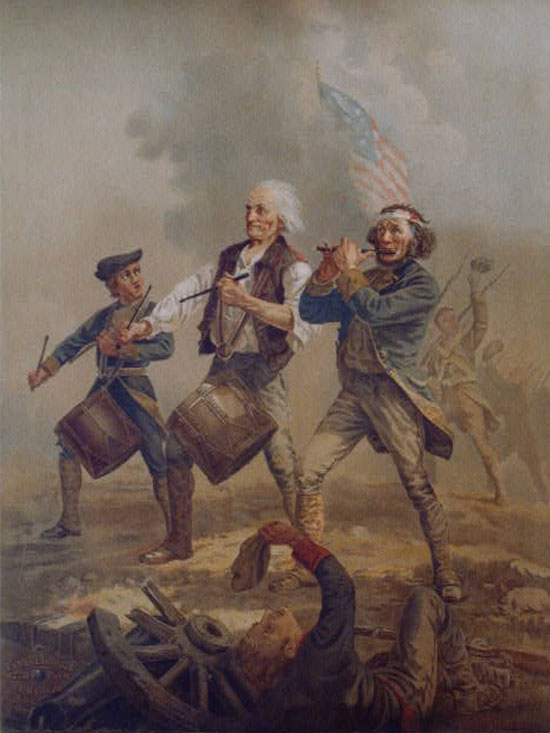 Archibald M Willard’s "Yankee Doodle," or the "Spirit of ‘76," is one of the most beloved patriotic paintings in America. While Willard originally sought to create a humorous depiction of parade musicians for the Revolutionary War’s centennial, he ultimately moved his subjects to the battlefield, and created this classic representation of American valor.
Image courtesy Library of Congress
2 / 7 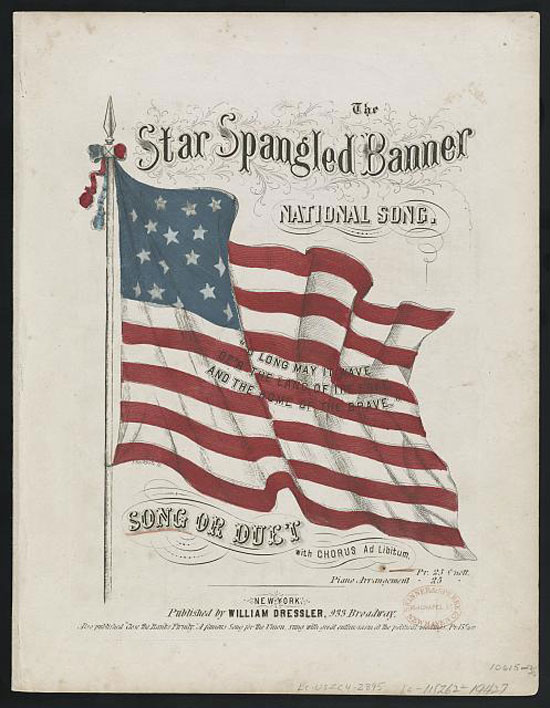 This sheet music cover to the "Star Spangled Banner" from the 1860s is both beautiful and fittingly regal.
Photo courtesy Library of Congress
3 / 7 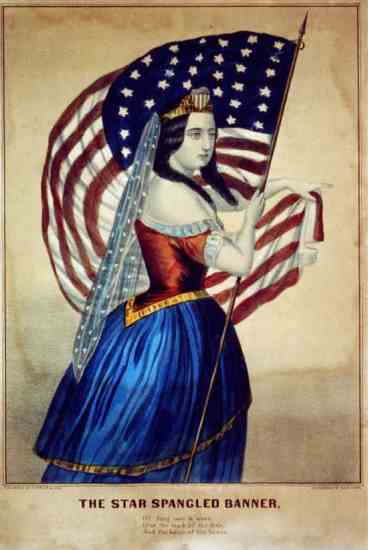 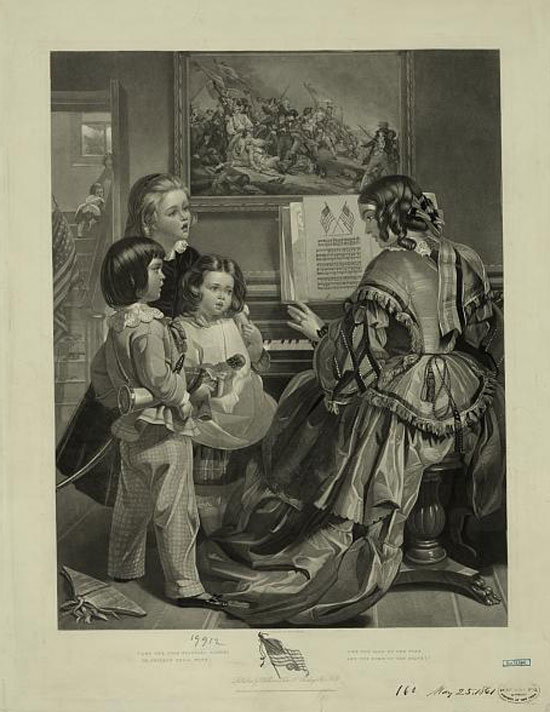 This 1861 drawing depicts an elegantly dressed woman and her children singing “The Star-Spangled Banner” at the piano.
Photo courtesy Library of Congress
5 / 7 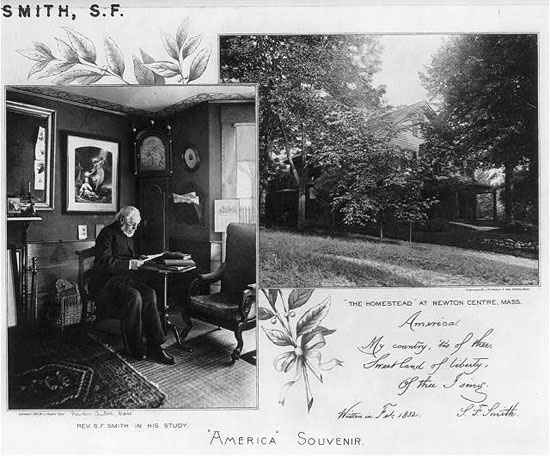 Samuel Francis Smith, writer of the famous “My Country, ‘Tis of Thee,” resided in his Newton Centre, Massachusetts, homestead until his death in 1895.
Photos courtesy Library of Congress
6 / 7 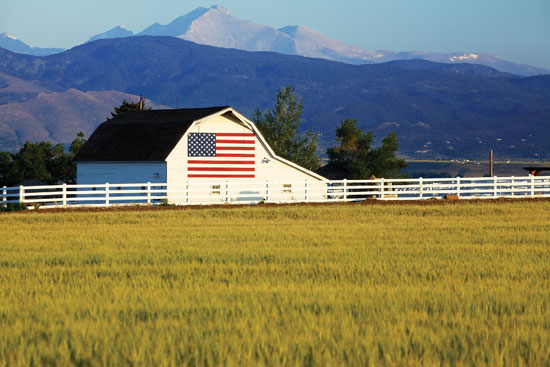 The “purple mountain majesties” behind this glimmering barn that proudly displays Old Glory is the quintessential American scene.
Photo by istockphoto.com/beklaus
7 / 7 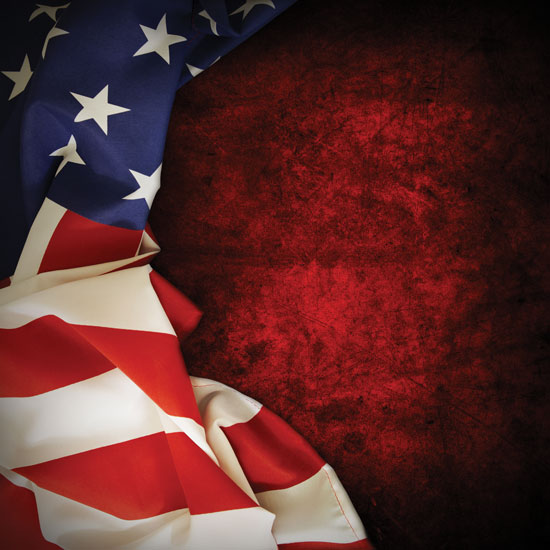 MORE ON AMERICAN PATRIOTISM:
Second World War: Patriotism and the WAAC
Father and Son Bond is Among Most Precious Gifts

The United States is a country rich in patriotic music — songs that are very much a part of our history and our development as a nation. They were born of great events that shaped our destiny, and the words flowed spontaneously from hearts and souls inspired by the events of the moment. What follows is a brief history of some of our nation’s most beloved tunes, which may very well inspire you to sing along this summer!

A young Baptist minister, Samuel Francis Smith, had just passed his 23rd birthday. He had been asked by a friend, Lowell Mason, the organist and minister of music at Park Street Church in Boston, to translate the lyrics in some German song books into English. One of the poems was “God Save Our Native Land,” which was set to a melody from Muzio Clementi’s Symphony No. 3.

Believing he could write something just as good to accompany this inspiring tune, Smith penned what would soon become one of the United States’ most beloved patriotic songs, “America”:

My country ‘tis of thee
Sweet land of liberty,
Of thee I sing:
Land where my fathers died,
Land of the pilgrim’s pride,
From every mountain side
Let freedom ring!

When he was moved to compose these iconic lyrics, he inadvertently chose the same tune the British sang with “God Save the King.” Because the American people had been vehemently opposed to anything British for quite some time, the tune hadn’t been sung in America for years. Smith himself said, “I had never heard it before.”

This coincidence was nothing to fret over, however, as the poem soon soared in popularity. Lowell Mason loved the poem so much he taught it to the children’s choir at his church, and it was sung publicly for the first time on July 4, 1832.

Smith was unaware that he had written himself forever into the minds and hearts of his fellow countrymen, but “America” — also commonly known as “My Country, ‘Tis of Thee” — continues to be a favorite with Americans everywhere.

Not all American patriotic songs, though, were the result of such exuberant inspiration. During the time of the French and Indian War, Dr. Richard Schuckburgh, a British army surgeon, was so contemptuous of the poorly dressed American colonial soldiers that he wrote a song making fun of them. He saw these American “Yankees” as simpletons, or “doodles,” and thus the classic song was born.

What he didn’t know, however, was that Americans would come to love the song and adopt it as their own, as a later added verse explains:

Yankee Doodle is the tune
Americans delight in;
Twill do to whistle, sing, or play
And is just the thing for fighting.

The British also had occasion to regret their “joke” when it was sung on October 17, 1777, the day General Burgoyne was forced to surrender his forces after the Battle of Saratoga.

Mine Eyes Have Seen the Glory

As with “Yankee Doodle” and “The Star Spangled Banner,” many of our most beloved patriotic songs were born out of the trials and tribulations of wartime. “Battle Hymn of the Republic” is no different; it comes from the Civil War era.

While visiting Union troops with her husband, Dr. Samuel Howe, and the Rev. James Freeman Clarke, Julia Ward Howe first heard the song “John Brown’s Body,” a then favorite of the soldiers. She just loved the tune, but felt the words too inadequate to encompass the sublimity of the war.

As her daughter later explained, “My mother had long cherished love of her country, but it burned more intensely when the war came, bursting into sudden flame after that memorable day with the soldiers.”

When Howe confided this to her pastor, he encouraged her to write better words. So, in the fall of 1861, she wrote the words to “Battle Hymn of the Republic,” for which she was paid $4 when they appeared in Atlantic Monthly a few months later.

President Lincoln was in the gallery when the song was first sung for Congress on February 2, 1864. The entire audience rose to its feet cheering and clapping. With tears streaming down his face, President Lincoln called out, “Sing it again! Sing it again!” Just over a year later, this stirring patriotic hymn was sung at three of the memorial services held for the Great Emancipator.

During World War II, Gen. George Patton Jr. was so fond of the “Battle Hymn” that he had it played before leading his men into action. The song was also sung January 20, 1965, at the inauguration of Lyndon B. Johnson as President of the United States. And it was sung again at the funeral service for Winston Churchill, by his own request, in Westminster Abbey, January 30, 1965.

It was Armistice Day, November 11, 1918. Several American soldiers were sitting on a grassy hill near Verdun, France. Someone started to sing softly, “O beautiful for spacious skies.” Soon other voices joined, the men rose to their feet, and the soul-stirring conclusion of “America the Beautiful” could be heard all over the countryside.

The song “America the Beautiful” traces its roots back to 1893.

Katharine Lee Bates was an English professor at Wellesley College in Wellesley, Massachusetts, about 12 miles from Boston, when she was given an opportunity to teach a three-week summer course at Colorado College in Colorado Springs.

While traveling across the country, Bates stopped at the World’s Columbian Exposition — also known as the Chicago World’s Fair — where she was greatly impressed by its alabaster buildings.

At the end of her summer classes, she was invited to travel by wagon to the top of Pike’s Peak. Looking to the west, she could see the “purple mountain majesties,” and to the east, the fields full of “amber waves of grain.”

Later that night, back in her room, the many images of the vast country played in her mind like a kaleidoscope. The sight of all this grandeur so impressed her that she wrote her feelings in the journal she was keeping of her trip. She then put the notebook away and forgot about it.

It wasn’t until two years later that she pulled the notebook out again, and on July 4, 1895, her journal entry was printed in a magazine called The Congregationalist. The words in the entry became so popular that requests poured in to set it to music.

Choosing the ideal melody, however, was much easier said than done.

The song was regularly sung to most any popular tune of the time — up until about 1910, when it was published with Samuel A. Ward’s “Materna” for the first time. Even though debate still continued, with some folks desiring a “less somber” accompaniment, this melody ultimately stuck and will forever be embedded in our nation’s memory as the one and only tune to the classic.

Katherine Lee Bates once said, “I would like to write a great poem, a poem that people will read long after I am dead, a poem that will always be remembered.” Without a doubt, that dream certainly came true with “America the Beautiful.”

Katherine Lee Bates, Samuel Francis Smith, Francis Scott Key and Julia Ward Howe put into words their dreams for a great America. It turned out, though, that they were also the dreams of many others.

It was once said that our patriotic songs are, “The very essence of something which we call love of country.” And nothing could be more true. American patriotic music reflects the very heart and soul of this great nation we call home.

O Say Can You See

A small boat slipped quietly out to sea the night of September 13, 1814, and in that boat was noted Washington, D.C., attorney Francis Scott Key and Col. John Stuart Skinner, United States prisoner-of-war exchange officer. They were on a mission, with President Madison’s approval, to negotiate the release of a British captive, Dr. William Beanes, a prominent Maryland physician who had been captured by the British and was being held on a British ship in the harbor near Baltimore.

Successful in their quest, Key, Col. Skinner and Dr. Beanes attempted to leave, but were detained until the following morning. The British, attempting to take Baltimore, were to bomb Fort McHenry, and they didn’t want anyone to warn the American Army of the impending attack. Spending the night in a small boat tied to the British ship, the three men waited as the Battle of Baltimore ensued.

All through the night, the men sat and wondered which flag they would see flying over Fort McHenry in the morning. And when the gunfire died down, they looked out…to see that there, over the fort, was Old Glory, tattered to be sure, but flying proudly nevertheless.

When the trio was finally allowed to leave, Francis Scott Key was so overcome with emotion that he had to write it down. He wrote the words, which soon became the poem “The Defence of Fort M’Henry,” on the back of an old letter. The next day he showed his verses to his brother-in-law, a Judge Nicholson, who was so impressed with the poem that he took it to the local printer, Benjamin Eades. It was published with instructions that it be sung to the 18th-century British tune “Anacreon in Heaven” — a song Key had had in mind when he wrote it. Copies of the newly printed poem-turned-song were soon distributed to every man at the fort and around Baltimore. Many people were so taken with it that they proclaimed it the “finest patriotic song of the year!”

“The Star Spangled Banner,” as it came to be known, was adopted as the United States’ national anthem March 3, 1931. Its popularity continues today, perhaps because it’s a ringing reminder of what it means to live in a country of freedom, as well as what that freedom costs. The last stanza says it best:

O! thus be it ever, when freemen shall stand
Between their loved homes and the war’s desolation,
Blest with vict’ry and peace, may the Heav’n rescued land
Praise the Power that hath made and preserv’d us a nation!
Then conquer we must, for our cause it is just,
And this be our motto — “In God is our trust;”
And the star-spangled banner in triumph shall wave
O’er the land of the free, and the home of the brave.