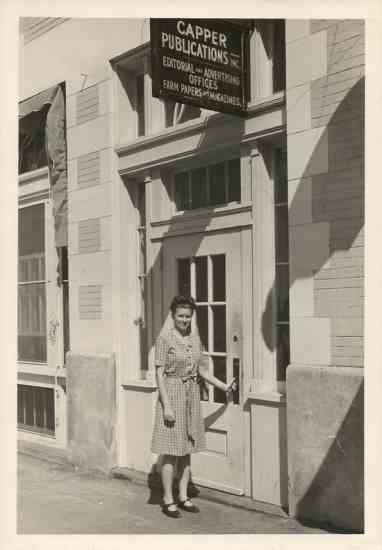 An article Dorothy wrote under the pen name Holly Miller, which appeared in the August 1944 issue of Capper’s Farmer.
Photo courtesy Dorothy Miller
3 / 4 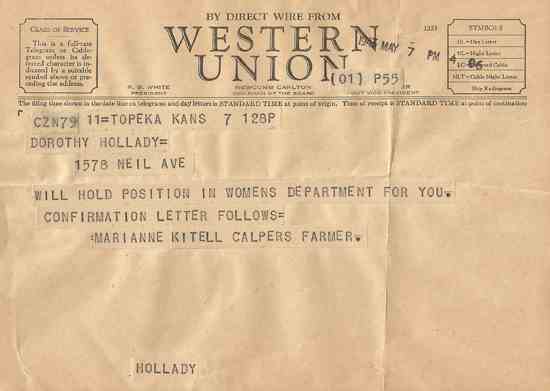 The telegram Dorothy received in 1943, after her interview with Marianne Kittell, letting her know she got the Capper’s Farmer editor position.
Photo courtesy Dorothy Miller
4 / 4 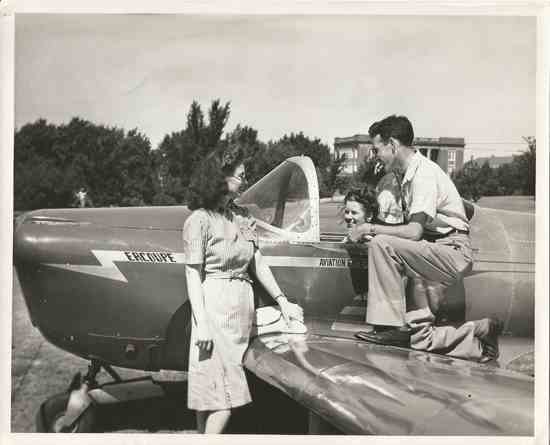 While covering the Flying Farmers Convention in Oklahoma in 1945, Dorothy had the opportunity to fly a small plane.
Photo courtesy Dorothy Miller
❮ ❯

We were recently contacted by Dorothy Miller, currently of Cincinnati, who just discovered that Capper’s Farmer is again being published. She was excited to hear it — and with good reason. Dorothy, now 92, spent two years in Topeka, Kansas, as the Associate Home Editor for Capper’s Farmer in the 1940s, while her husband, Bob, was in the Navy.

Dorothy has just finished writing a book about her life — for her family — and one of the chapters details her time working at Capper’s Farmer.

Following are excerpted portions from her book. We hope you enjoy our tribute to Dorothy, and we would like to thank her for the part she played in helping shape Capper’s Farmer into the magazine it is today.

At the beginning of my senior year, the military draft took the editor of the Agricultural Student. I was asked to be editor. I was the first woman editor, and got lots of publicity. Being editor took so much time that I didn’t have time to work. I took out a $200 loan. But it was worth it. The experience helped get me my dream job with Capper’s Farmer.

I had always wanted to be a writer for a magazine. I had applied to several magazines, and got back nice letters. One of them went to Capper’s Farmer. Capper’s Farmer Home Editor Marianne Kittell came all the way from Topeka, Kansas, to interview me. She offered me the job for $150 a month. It was my dream job, so I accepted.

On my first day, everyone welcomed me. My first job was to go through a stack of recipes that had been sent in and sort out the ones we would publish. I was afraid to reject any!

My first writing assignment was a beauty column under the name Jean Gray. Another was to produce a leaflet called “Club Notes,” that we sent out once a month. It had Marianne’s name on it, but I composed it. … I remember the smell of the ink … and seeing and hearing the presses print out pages.

After I had been at Capper’s Farmer for only two weeks, Marianne left. Mr. Yarnell, the Chief Editor, said he would have given me the Women’s Editor position if I had been older — I was just 21.

I soon met Gale Curtis. Her husband had been called up, and she wanted someone to share their apartment. I also became a Red Cross Nurse Aide.

As time went on, the volume of my writing assignments increased. Some involved traveling.

On August 16, 1945, I was working at Stormont Hospital and heard a radio broadcast that peace had been declared. I remember Gale and I picking up two other service wives and joining the crowd downtown. Topeka went wild. I was excited and happy. Yet I couldn’t help feeling sad. It had been a long, terrible war, and so many, including Bob’s brother, would not be coming back.

Shortly after that, Bob arrived in Chicago. I joined him there, and we went back to Hillsboro together. …

The two years in Topeka were wonderful. It was the kind of career I had always dreamed of. Without it, I would probably have felt cheated. But I did live it, and I was successful beyond my wildest dreams.